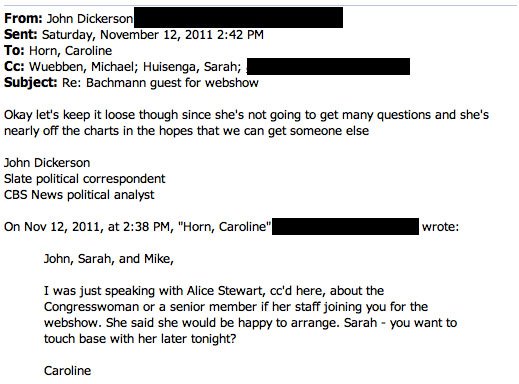 In response to the leaked email, Bachmann’s campaign released this statement:

“The liberal mainstream media elites are manipulating the Republican debates by purposely suppressing our conservative message and limiting Michele’s questions,” said campaign manager Keith Nahigian. “We need to show the liberal media elite that we won’t stand for this outrageous manipulation. Help us fight this affront by sharing this with your friends.”

A CBS spokesperson released a statement to Fox News stating: “It was a candid exchange about the reality of the circumstances — Bachmann remains at 4% in the polls.”

Congressman Ron Paul’s team was also upset with the lack of air time during the CBS debate.

“CBS News, in their arrogance, may think they can choose the next president,” Howard said. “Fortunately, the people of Iowa, New Hampshire and across America get to vote and not the media elites.”