The American Customer Satisfaction Index for retailers in 2015 came out today and it’s a pretty good read for those with a taste for the dry.

Retail is a game of expectations and momentum. Tell the customer what to expect then give them just a little bit more. As long as a chain is doing that well the business (and stock) will survive inevitable setbacks.

Shoppers are surprisingly reasonable. They don’t expect to have their hand held at a Target. They just want the store clean and orderly. Department stores need fancier fixtures than discounters. All grocery stores have to seem clean.

The ASCI numbers are typically fairly well correlated. In better economies customers want their arse kissed more. Not one merchant scored higher this year. I blame the Millennials and their sense of entitlement.

There are some notable standouts. Home Depot’s less capable sibling Lowe’s had the biggest drop in the survey. Only 74% of Lowe’s customers were happy with their experience in 2015, down from 81% in 2014. Home Depot stomped a mudhole in estimates this morning (in a good way) and we hear from Lowe’s tomorrow.

The fact that HD and LOW fell is also an economic tell on housing. Housing supply stores have a hard time staffing in hot housing markets. Anyone who knows how build can make more money practicing their craft than working retail.

I showed the department stores earlier but it’s worth revisiting. 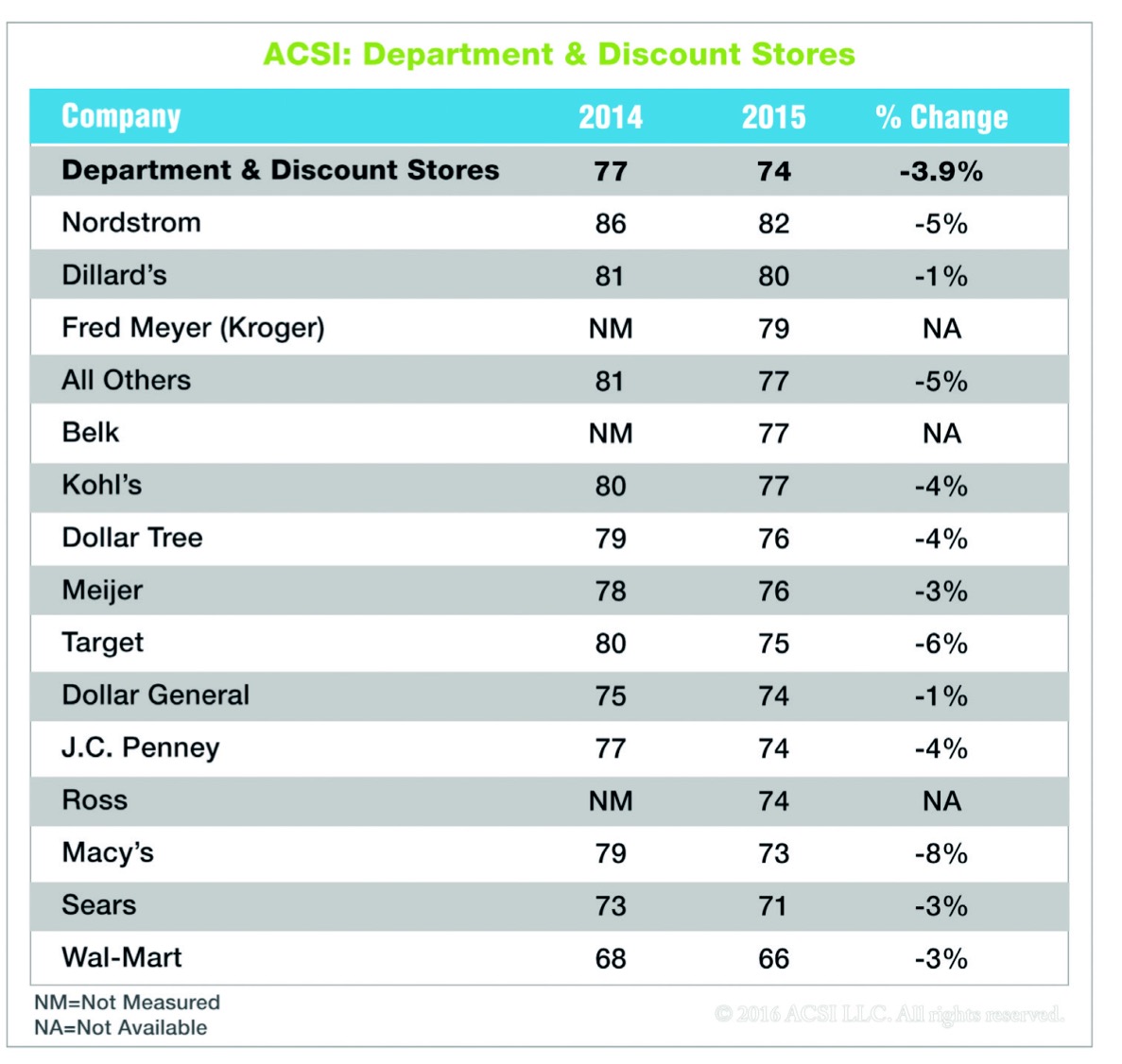 Macy’s customer satisfaction drop off was the second largest in the survey but suggests a much bigger problem than Lowe’s. When I rant about retailers wasting money on buybacks it isn’t (only) because I’m an ass. It’s because I’ve worked retail. I was at Macy’s when the chain went bankrupt in the early 90s.

All this is really personal to me. When I see an 8% drop off in customer satisfaction at Macy’s I see a bunch of laid off employees sitting at home as customers go un-waited on in stores and bankers collect pennies per share on Macy’s dumbass buyback. I see a company dying. I see it all at once.

Which doesn’t make Macy’s a short. In fact, I’m long because I believe management will be ousted by the end of the year. But customers won’t come back just because some activist starts spinning off Macy’s stores. The chain will die. It can’t justify it’s own existence as it is. As the fixtures start falling apart and the place becomes a dump shoppers will stay away in droves.

The other day my lab took himself for a walk. He’s 11 and I’m attached to him the way a man gets tied into a dog after a while. He defines an era of my life.

So my heart sank when I found Dunkin’ slowly loping towards me across a street in front of an oncoming car. It’s a residential road so the neighbor’s car only bruised my knee a little when I threw myself on the hood to save a slightly decrepit animal that’s pushing 90 in people years.

The feeling of dread I had watching the scene unfold, that sense of “oh crap, I’m watching this thing die”, has lingered with me all week. That’s what I see with Macy’s. It’s an old, dumb, sort of lovable-ish animal about to unwittingly kill itself for no good reason at all.