Yahoo provided some more clarity on its previously announced plan to pursue strategic alternatives this morning. Which is to say, the company issued a boilerplate statement about putting together a Strategic Review Committee and named the banks who will now be paid to make contact with the pool of maybe 15 groups on earth who could conceivably have an interest in acquiring the company.

Nice work if you can get it. A special shout-out to Goldman and JPMorgan. Both firms were on the team that was hired 3 years ago to try to find a tax loophole big enough for Yahoo to hide as much in $16b in taxes the company would owe if it sold Alibaba on the open market. After the subsequent plan failed to get a nod of approval from the IRS Yahoo was forced to apparently start from scratch. It’s a credit to GS and JPM that they could be paid both to help light a company on fire and snuff it out effectively as possible later.

Yahoo is firing 15% of the company (in small tranches every Wednesday, according to re/Code).

Today was supposed to be an update on the release February 2nd when Chairman Maynard Webb said “The Board also believes that exploring additional strategic alternatives, in parallel to the execution of the management plan, is in the best interest of our shareholders.”

Yahoo liked that phrasing so much they had both Maynard and CEO Marissa Mayer repeat it almost verbatim a couple more times today. There’s nothing new here beyond an updated roster of advisers. Unless Maynard and Mayer had the same writing teachers from 3rd grade through college I’m guessing their statements were written (cut and pasted) by a third party. There’s something chilling about a company issuing a form letter this lazy the same week they sack everyone tasked with pursuing fruitless vanity magazines for 3 years.

Tough situation. I wish the best for all. 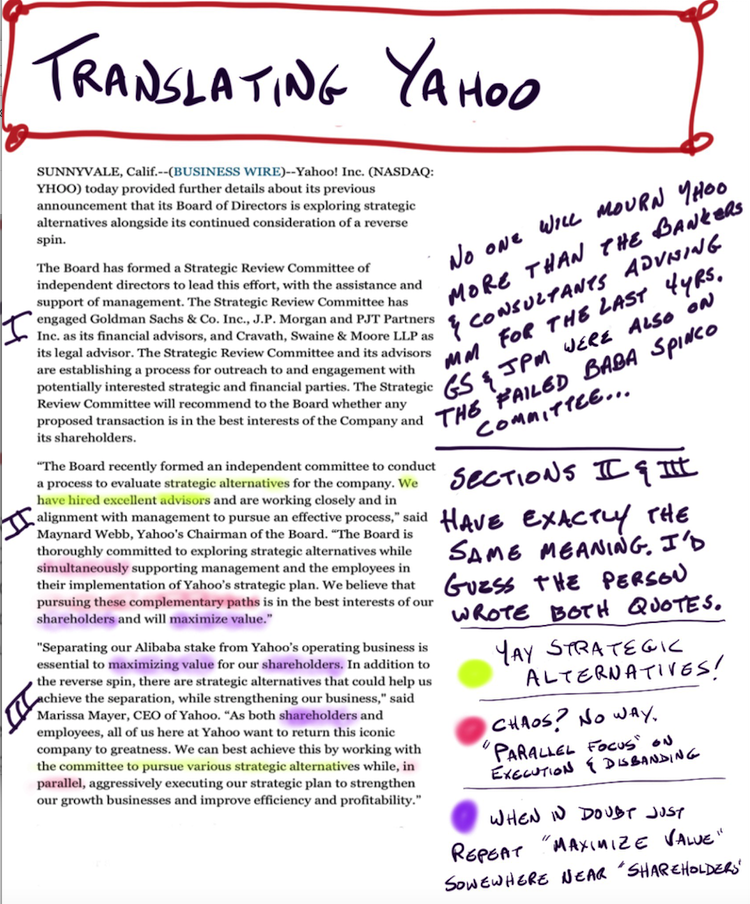