Damn, It’s Good to Be a Crony!

The above is satire, of course, but let’s not laugh too hard at the funny kiddies.  In certain European states, the “path to success” is through the government bureaucracies.  Is the U.S. approaching that level?  Food for thought.

If you have not already, you should be trimming your silver and gold positions, or at least the leveraged ones.  We’ve had nice move here, so let’s not get too greedy.  I’m out of AGQ, NUGT and ERX as of this morning.  I’ve also trimmed between 35-50% of the remainder of my largest positions.

Have a great Friday.

Bonus Crony!  This goes out to the speech stomping Jim H, (D- Croneyville).

END_OF_DOCUMENT_TOKEN_TO_BE_REPLACED

Avast Mateys! It’s time to strike the main sail and deploy the twin outboard Mercuries, as Her Majesty’s Treasure Frigate, The H.M.S. Dollar-Dollar Bill, is taking on water and listing amidships!  Now is out time to pounce, Jag-you-are (sic) – style.

As I type, the dollar has broken below the crucial $82.00 “line o’ death” it’s been flirting with this last month, and fighting against even as all the stochastics began to show divergences marking an imminent change.  I think that change is here, and provided we finish the day below $82.00 (we are at $81.94 right now), I think we should be clear to fly until at least $80.70, which is the long term 50% fibonacci.  I do believe we should bounce then, just in time for a little September flattening while the dollar gets ready for a test of the 38.2% fib line down  below $79.00.   That should coincide with some nice seasonality for the precious, which always seems to be great offerings for the Turkey Gods, come November.

As I mentioned yesterday, I pushed the risk pedal with some AGQ, as silver was moving first.  However, I think today is gold’s catch up day, so if you want to add to your NUGT for a brief period, I wouldn’t gainsay that additional leverage.  As always, I recommend small and cautious with these instruments.  If you are seeking less “muss & fuss,” GDXJ is probably our most oversold ETF, as it got cranked the hardest in the recent “junior miner recession” this Spring.  It’s relatively overbought in the near term, but nonetheless a good bet to test it’s 200-day EMA here ($23.40) before pulling back.

A more speculative play is AUQ, which got trounced recently on bad numbers, but appears to be forming an island bottom on the daily chart, and has almost a full dollar gap to fill north of here.  Of course, the landscape is littered with these plays, and some of far higher quality.   Keep an eye on the 200-day EMA of gold bull index $HUI for a near-term guide.  It’s next resistance (top right of a daily cup) coincides with that 200-day mark, at about $465, and that should provide the near term stand by.

Happy near-term buccaneering to you all, me mateys!

END_OF_DOCUMENT_TOKEN_TO_BE_REPLACED 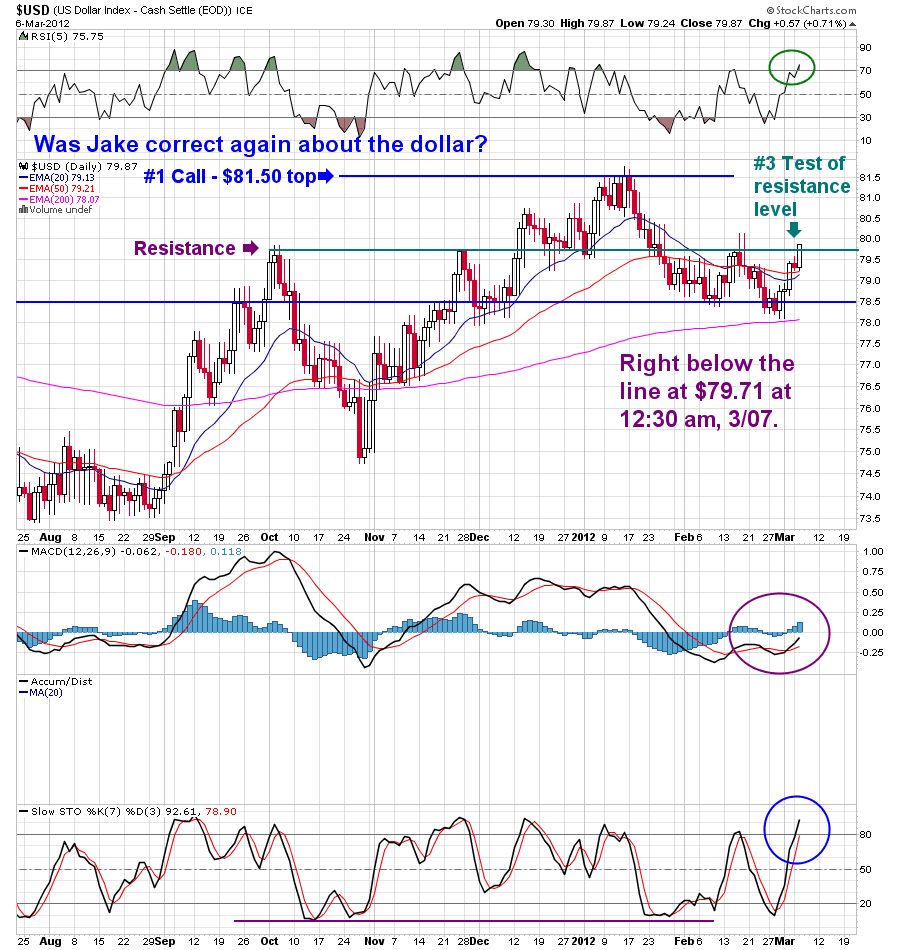 Awakening by the Sea

the sky a namesake blue

the sea, a  mirror, floating by

the sun comes in, the night that sped

to cover all has passed

so creeping in and on my bed

light reaches me at last

at first not knowing where I am

I slowly raise my head

And brings joy in its stead

I do not think that there can be

in the mornings early light

many better things to see

than that ocean shining bright

Nothing more becalming than the fresh lyrics of the 15-year old English student, no?  Well, to each his own.  I thought that was good enough for publishing anyway, and I needed some becalming after the day my port endured, even with only 60% exposure.  Almost all my high fliers got hit, but I think I see some relief in at least the near future as both the dollar and the miners ($HUI) run into key resistance and support levels.

First, the dollar, which this daily $USD chart shows has hit that resistance level again today and has backed up below $79.80 this evening.  If it continues to fall, we should see a tradeable bounce.

Second is the $HUI weekly, which I showed last night as approaching the channel bottom.  Well we hit that bottom and bounced this afternoon.  If we stay in that channel and get a rise back up, we should be good for an extended period. 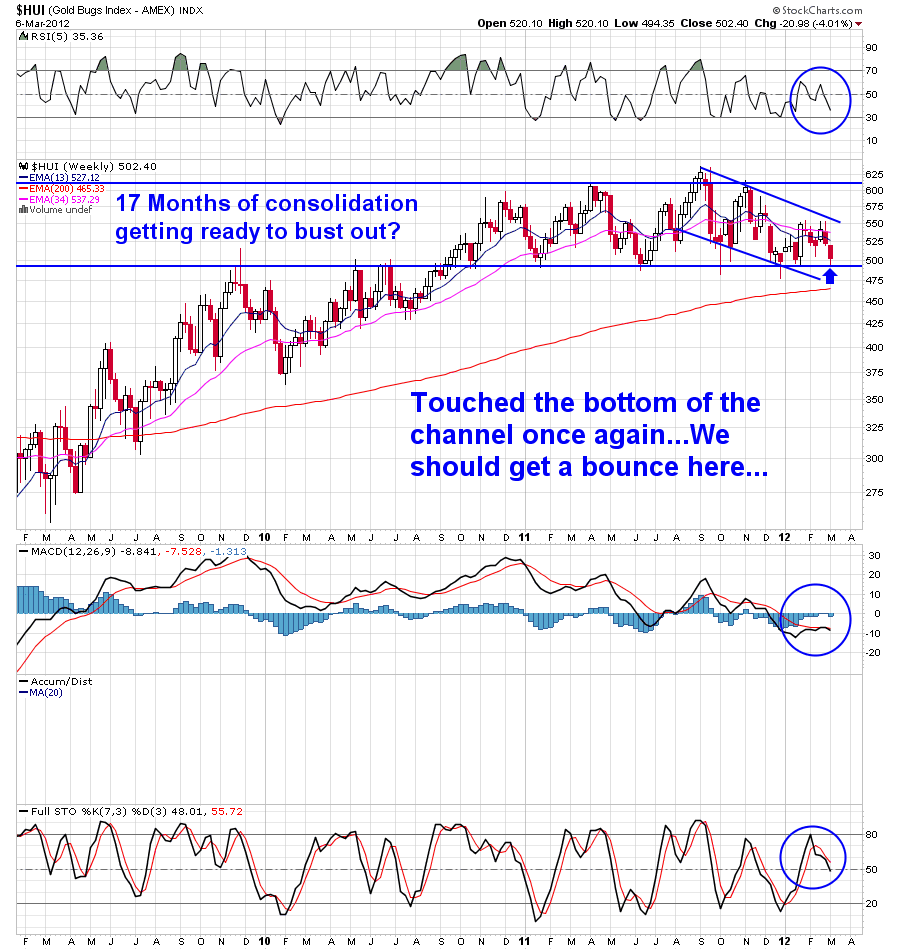 I bot some EXK at the close today and a large pot of TC as well.  I might wade in for some AG and possible NUGT too if I think the bounce has legs.  Best to you all.

END_OF_DOCUMENT_TOKEN_TO_BE_REPLACED

______________________
Within a short number of years and certainly within the decade, we here at iBC will have created our own language from whole cloth, and the only people who will understand a word we are saying will be the slavish few who have hung on here for every nuanced phrasing and reworked 70’s-era cartoon-network pop cultural reference.

In future, iBC particpants  will not seek to purchase the equity receipts of a heavily shorted security in order to force immediate re-purchase by said short sellers, but instead one will “GO HAM” on said equity receipts and save time and exertion associated with over-verbose description for other tasks.

As well, one will never speak of aforesaid unfortunate short sellers as “portfolio damaged,” or “margin overburdened,” or even “equity depleted” participants in these volatile markets but rather as members of the investment community who, good character not withstanding, have been “GRAPED,” and left for corpse-pilfering on the side of the lonely road.

Brevity being the soul of wit, such gradual neologistic replacement will not only render these fora more humorous (sic), but also far wealthier in the end.  Hang on for the ride.

Today was the best day of the year for me thus far, and it’s been a pretty good year thus far.  For one thing, all my precious metal positions went HAM on me today, with most breaking the 5% barrier and some flirting with 10% (like SSRI, ANV and IAG).  Moreover, my two big rare-earth metal plays, QRM and AVL were also up big at over 7% and over 10%, respectively.  Unfortunatley I wasn’t fully invested, having kept quite a bit of cash on the sideline for “opportunities,” and also having sold my AGQ and NUGT just yesterday to reduce leverage and risk.

I’m not as bent out of shape about that as you might think however.  I still returned over 4.2% today, and now I do have dry powder with which to pick off new targets.

Some of those will be additional pickups of the “Samurai Seven,” of which only two are currently precious metal picks —AG (+13.4%) and RGLD (+6.7%).  Nevertheless the full portfolio is up 11.1% since inception, and that’s despite two relative laggards in the short list portfolio.

The two Samurai I shall be gobbling tomorrow, double-ham fisted, however, are my two laggards, UPS (+3.3%)  and COP (-4.0%).  Both have nice dividends and UPS is finally creeping through that ceiling we talked about earlier in the year. getting ready for a breakout.   You cannot keep a good man down, or a good company, and these two fine specimens will do us well as the Bernakean Liquidity Parade Rustles on.

My best, and red eye ham gravy, to you all.

END_OF_DOCUMENT_TOKEN_TO_BE_REPLACED 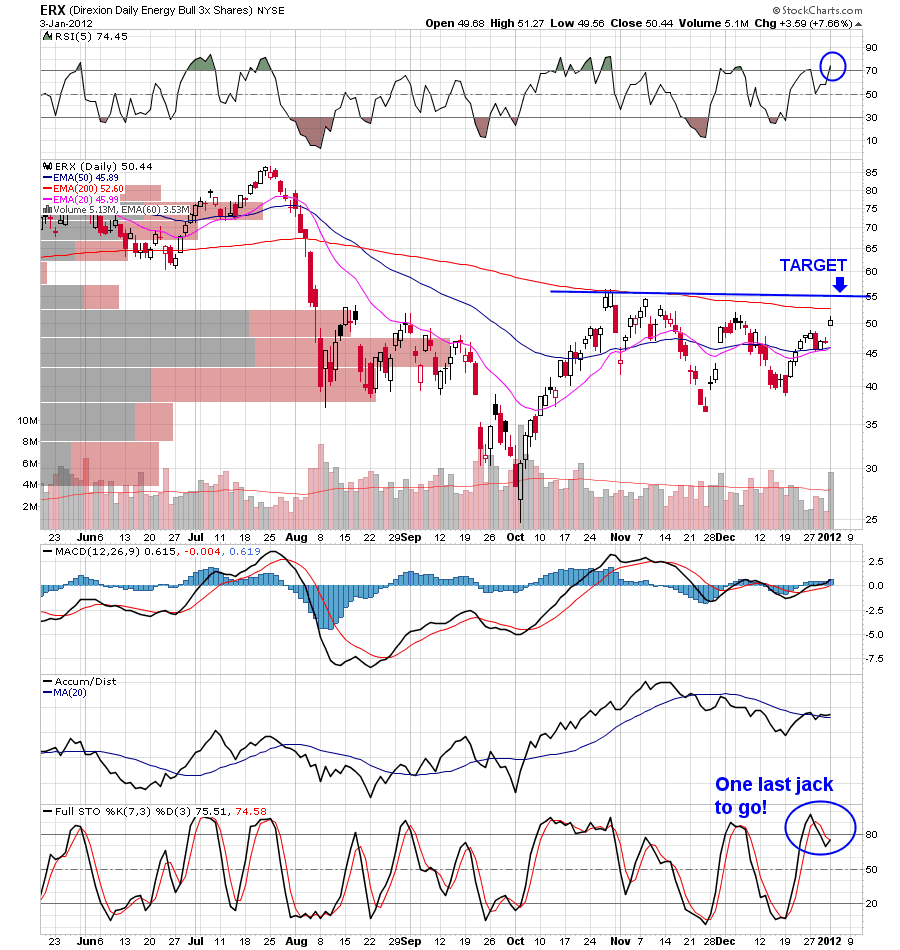 ____________________
It’s uncanny, isn’t it?  Jakerodamus provides you, just days ago, with predictions– like Rick Santorum coming in a very close second to Romney in Iowa– and poof!, that prediction comes true!   Recall also, that I predicted the same Santorum will come in a more distant, but still surprising, second in New Hampshire.   The rubber match will be South Carolina, which will force some sort of confrontation and quite possibly a mutual detente between those two leaders through the remaining primaries.

What else did I say?  Oh yeah, something about gold, silver and earl, right?  So far, so good.

I’m probably going to bail on the ERX trade tomorrow, however, as I think we might get one or two more days of “jack” before that thing bangs against that $55 resistance and comes back down to fill that gap at around $47-ish:

I will also shave some NUGT tomorrow, although I think there are still some very good charts out there in the gold and silver, including AG, ANV, BAA, and EXK, and RGLD.  My little coal play, PCX also looks like it has some room to run, stochastically speaking.

To summarize, I am not ready throw the towel in on this grand first day leap, but I’m also playing “tight” right now, and keeping a keen sharp and wizened eye (of the sorcerer, Jakerodamus) on the dollar.  Make no mistake, the dollar will tell our tale here, good or bad.   If the dollar drops below $79.30, or if gold breaks above $1620, I’ll be adding again.

END_OF_DOCUMENT_TOKEN_TO_BE_REPLACED

A Blow to My EGO

Get ye some vampire gold!

Time and time again, I’ve stood here and recounted the reasons why I stay away from the large cap gold miners like AEM, ABX, NEM and even GG (though I do own a little of this one from the Wheaton Gold days).    Sure, these are all fine old girls, but they often end up on the wrong side of an acquisition play which then ends up trashing their stock price in a volatile gold market.

That means these big hulks are generally buyers, for the most part, as their management team has little to do but acquire more assets in order to expand away from relatively diversified and well known properties.  They need new territories, fresh blood, new meat; and the highest percentage way to continue drilling on profitable properties is to acquire them from juniors who have done the sweat work to seek them out.

Well, it seems my lonely EGO has gotten all egotistical on me and wants to be a “playah” like the big boys.  No more holding it’s hand out as trade bait for the majors, Eldorado Gold is officially leaving the middle-market gold mining community in its dust and going gold speculating in Turkey, Greece and Romania.

Yes, you got that right.   They’re offering $2.5 bn of their own stock in order to buy a company (European Goldfields) that is looking for gold in respectively, the next Islamofascist hot spot, the First Beggar of Europe, and oh yeah, a place known for producing pickpocketing gymnasts with facial hair and night dwelling blood suckers without.

That should work out well, fellahs.   Probably very little nationalization risk you’ve paid for there….

In any case, these M&A purges usually overdo themselves, so my beaten down EGO is probably a good pickup here tomorrow morning after what I expect will be a final washout.   There’s support at $12, but I’m not sure we’ll get that far.  Nevertheless,  I’ll place my bets in that area, hoping to catch a bounce.

Oh, and I think everything else will bounce as well.  Most especially earl and gold.  So tomorrow, if I get my flush, I’m going to throw down for some NUGT and for some ERX.

Don’t worry, my stops will be tight.   I’m not a masochist, after all.