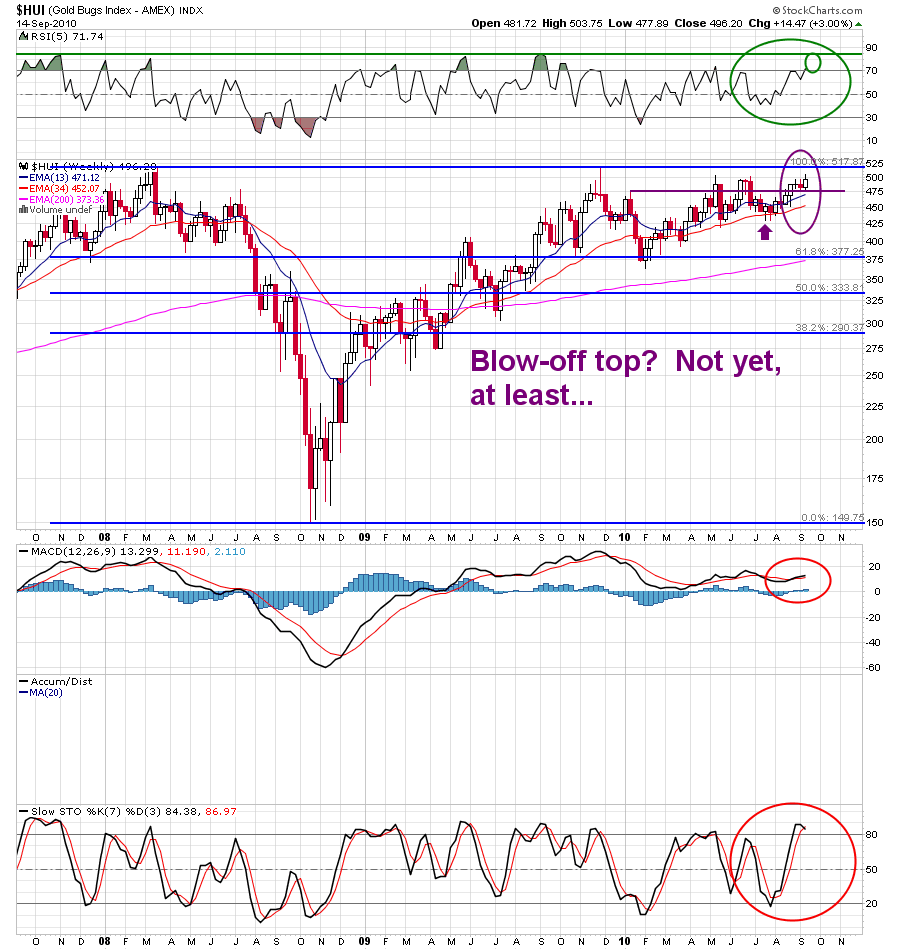 Quite a day today, non?  Up another 3% and looking for more, despite the heinous allegations made by some of the ultimate Louis the XVI exit of our precious metals bull.

A vicious canard, but forgivable given the circumstances of the day.

And don’t believe a word out of those frenzied (and way late) hugger-muggers in the Japanese Ministery of Finance.  Who do they think they are kidding “intervening” in the rheaming (sic) of the U.S. greenback?   What effrontery!  All the fools do is make a mint for those fading them.  Why George Soros– the rosy-nosed blaggard– will finance half the New York electoral ticket on this move alone!

What’s our friend Baby Huey say about how close we are to “fini” on this move?  You tell me:

And one to look at for the coming Santa ride… 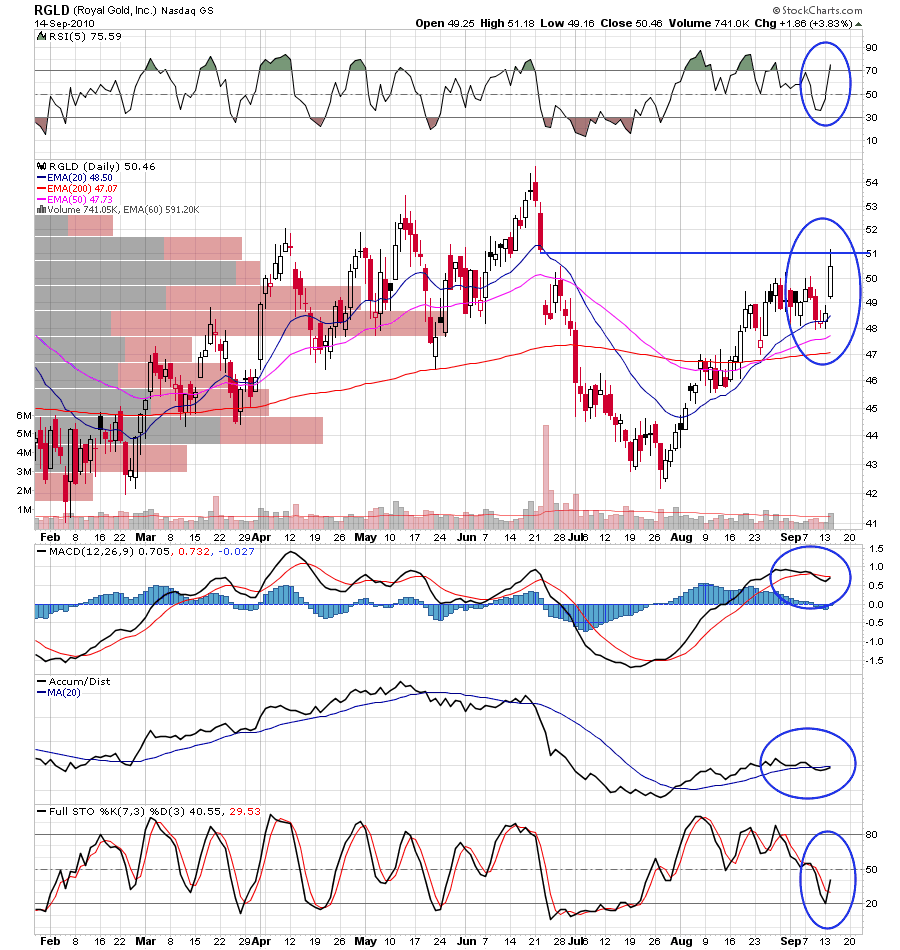 $50 looks like a nice entry if your thinking of it…

Enjoy the good days, and be well.

END_OF_DOCUMENT_TOKEN_TO_BE_REPLACED

Can you handle it?

Not as well known a ditty as “Red sun at night, sailor’s delight,” but far more remunerative.

First, my apologies for not being able to interact last night save by teeny tiny Crackberry screen, which after a day of meetings off-site (I am on the coast now), left my weary eyes strained.   I’ve never actually attempted to post from a hand-held device, save for comments, and I’m wondering if any of my fellow bloggers have.

No matter, I’m here briefly to let you know we are at an inflection point, in case you haven’t noticed.  The dollar has broken some significant support levels at $82, and I think it’s next stop — and quickly there- will be $80.   I think old Ben has finally gone and done it and broken the bank.  Your only respite will be equities an precious metals in the near term.   For the long term it will be only the latter, I’m afraid.

In the meantime, as it always seems to happen, I am enjoying “large phallused gains” in almost every category of my holdings, but none more so than the precious, and specifically silver and gold.   One of my correspondants was wondering about possibly putting on some more IAG exposure for the short term rebound.  Now would be that time, young chappo.

Also, all the silver gods and dogs should move today and through this expansion as silver has easily crushed the $20 resistance mark and is now back on its way to all time highs.  I may take this opportunity to add some leverage to my holding through some DEC call action on SLW.  I may add also to some “permanent options” like EXK and GSS.

In short, the PM’s are like fat, slow blind juicy turkeys out there and you are armed with a blunderbuss on the third week of November.  Go forth pilgrim, and pacify.

END_OF_DOCUMENT_TOKEN_TO_BE_REPLACED

There are few places to hide.   Keep an eye on this one: 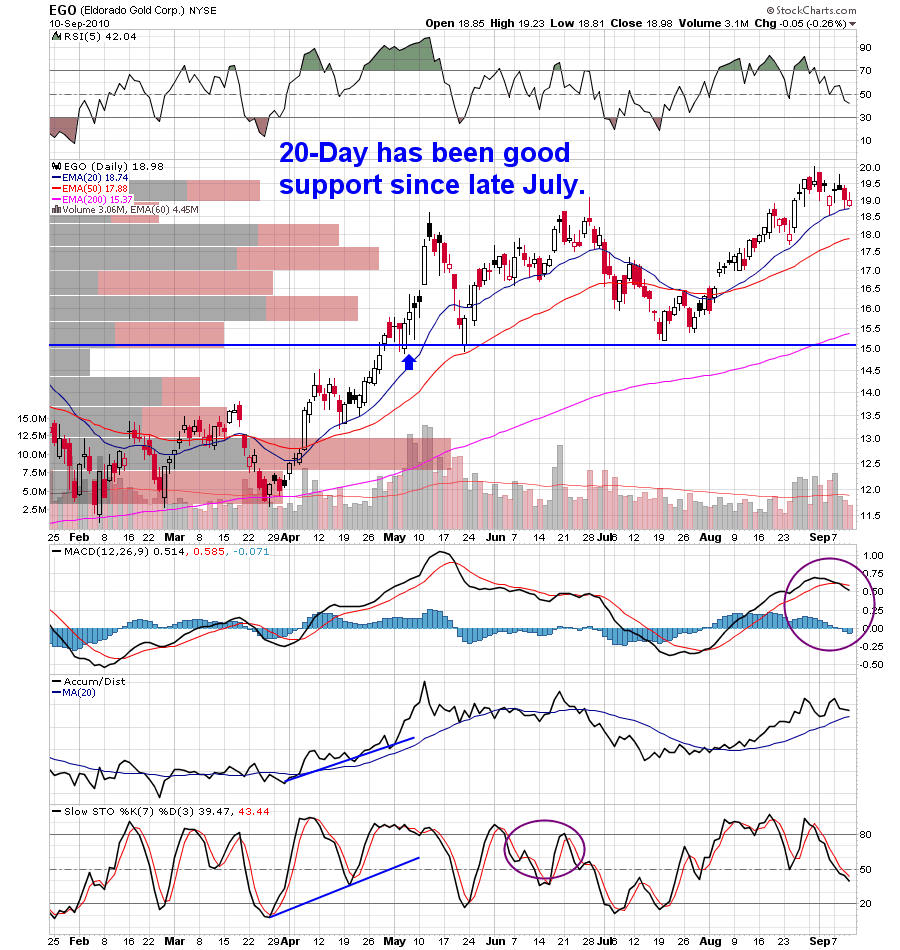 Bernanke thinks maybe you can be saved by zero.  You know better though, don’t you?

END_OF_DOCUMENT_TOKEN_TO_BE_REPLACED

Word has come down from on high: Le français est interdit!!

Many apologies to those who may enjoy the French, or the French Canuckistanians who often drop by in passing, as their langue – il est “banned.”

Le langue d’amour is especially verboten (no worries, that’s la langue Allemande) in association with mention of large, arse-kicking, three-digit wins in such names as ENTR, SQM and CMI.  No more, mon Capitain.

Pay attention now, because this is important.  Flibberty gibbeting about with “we’re crashing, no, we’re rocketing” is fun, if you have the time, but paying attention to secular bulls on pullback pays cash money every time.

Right now is one of those times.  Gnashing your teeth about missing the (oft-preambled) stratospheric rise in ANV and SLW?  Curious about RGLD and EXK?   PAAS and EGO?

Now is your time to step up and contribute to your  fortune.   Stop screwing around and get serious already.

END_OF_DOCUMENT_TOKEN_TO_BE_REPLACED

The Hedge of the Gods 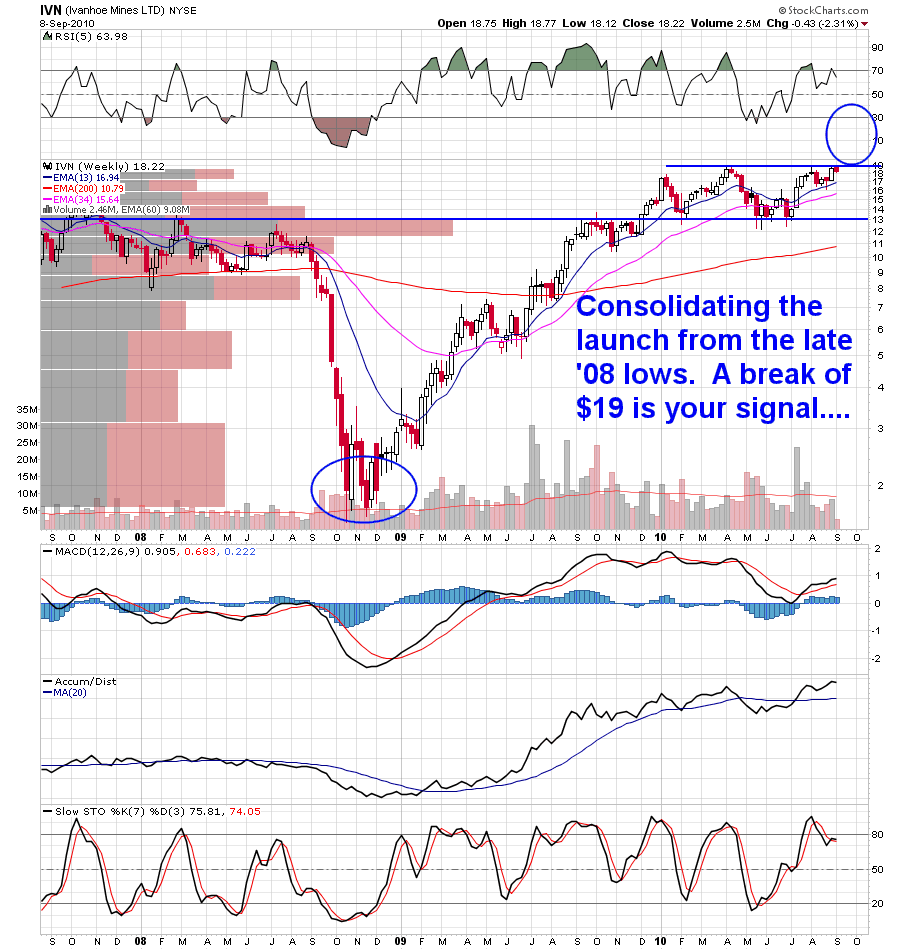 ____________________________________
Monsieur Le Docteur (actual footage above) was toiling away in his mad scientists’ lab today in The PPT (located in a secure concrete and steel rebar-reinforced bunker buried deep beneath the last tree in Bed Stuy), and he came across a fantastic discovery that may very well account for the vast amount of winship I’ve been experiencing during this nine plus year secular gold bull.

Specifically, he reported this:

and even more curious, he finished with this additional information:

During Overbought cycles, GLD still went up 70% of the time for avg return of 0.76%

Could this be the very Grail that poor, waylaid Noble Sir Timmah was looking for?  The contrarian never-fail end to his troubles?

I dunno, somehow I think he’d find a way to screw even this much up, but you never know.  Meanwhile, here’s IVN — the “oversold Tiger” mentioned above.   Ironically, I own little of this.  But then, I don’t high-volume trade much either:

Look upon the beneficence that The PPT showers upon you with the occasional freebie above.    Keep in mind, this is but one treasure from the horde of information waiting to be extracted from that pristine and beautiful engine.   How can you be so Pennywise a clown to eschew The PPT while risking a stark and foolish pounding?

Make haste, haste to give him laud, the Mage, the Fly of Harami!

That is all, carry on.

END_OF_DOCUMENT_TOKEN_TO_BE_REPLACED 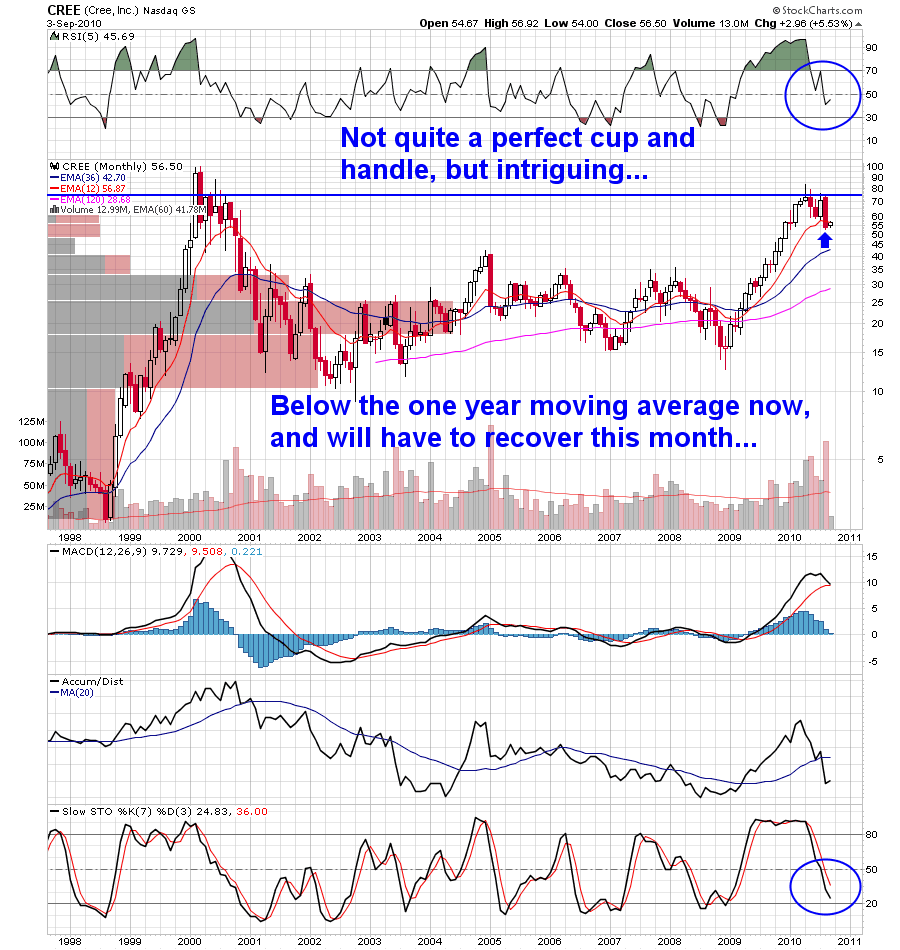 I hope you all had a fine Labour Day Weekend.   I spent mine fending off a myriad of stressful “deep nature” day trips (with all the kids) whilst trying to cajole–via overheating Crackberry Storm II — both clients and adversaries into a proper canvas and balsa-wood box which I plan to nail shut tomorrow morning and mail to Zambia, postage due.

True, I do this stuff because I love it, but I also do it for Barak and his indigent health care plan.   I want to make sure that shit is well stocked as it launches off the pier.

Given that The PPT is indicating at least a near term pullback, perhaps as early as tomorrow morning, I figure I’d take a look at some loooooonger term plays out there that may be worth taking a pinch of snuff and blowing some loose cash on.

Said loose cash should be in abundance as you all are reaping big gains from the TNA sales you’ve been harvesting as The PPT has directed you, yes?

Or you’ve at least salted away a couple of dollars by following my direction in ANV or SLW in the last six weeks, am I correuct (sic), sieur?

No matter, as I’ve always got more to give, though it’s questionable whether you deserve it or not…  I think at least two of the following three will work going forward to Christmas, or at least the time of the Turkey gods.  Let’s see if  you can figure out which I think are the best.   First, our recent wilting lady, CREE in a monthly chart:

Then there’s her somewhat zany half brother in the LED poison industry, VECO: 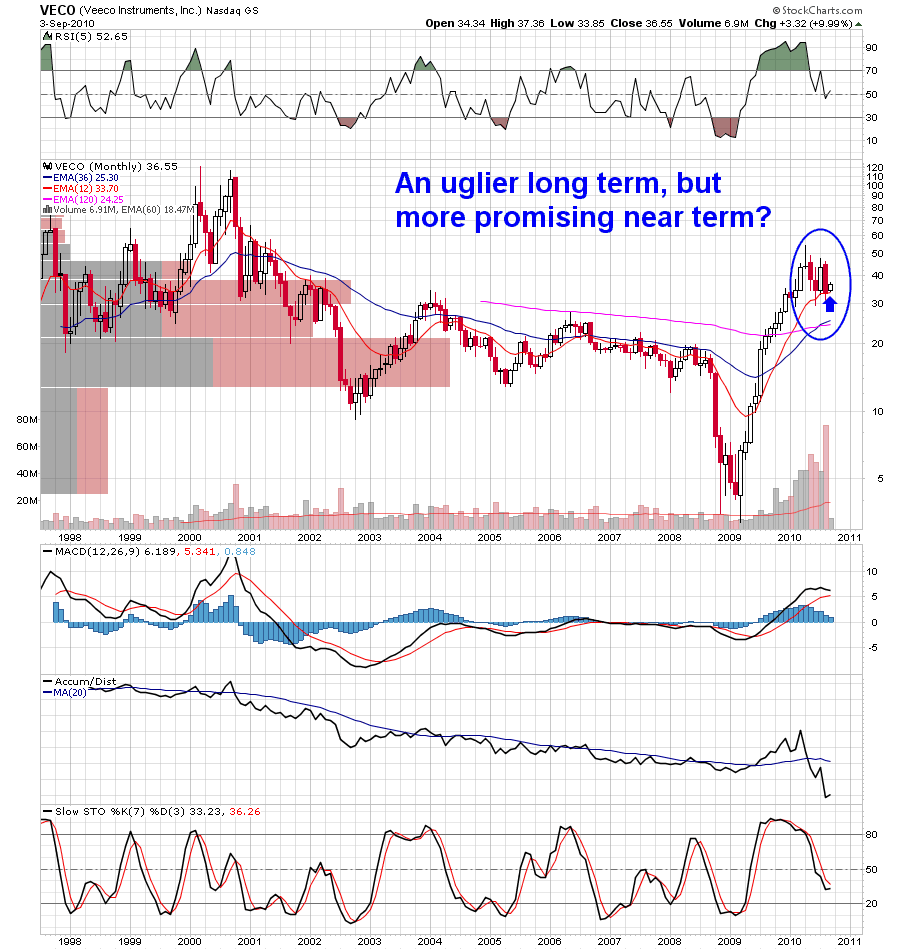 Then, just for giggles… there’s that one I told you to hold until you were a grandmother, or similar benevolant adult figure.  It really doesn’t need much comment: 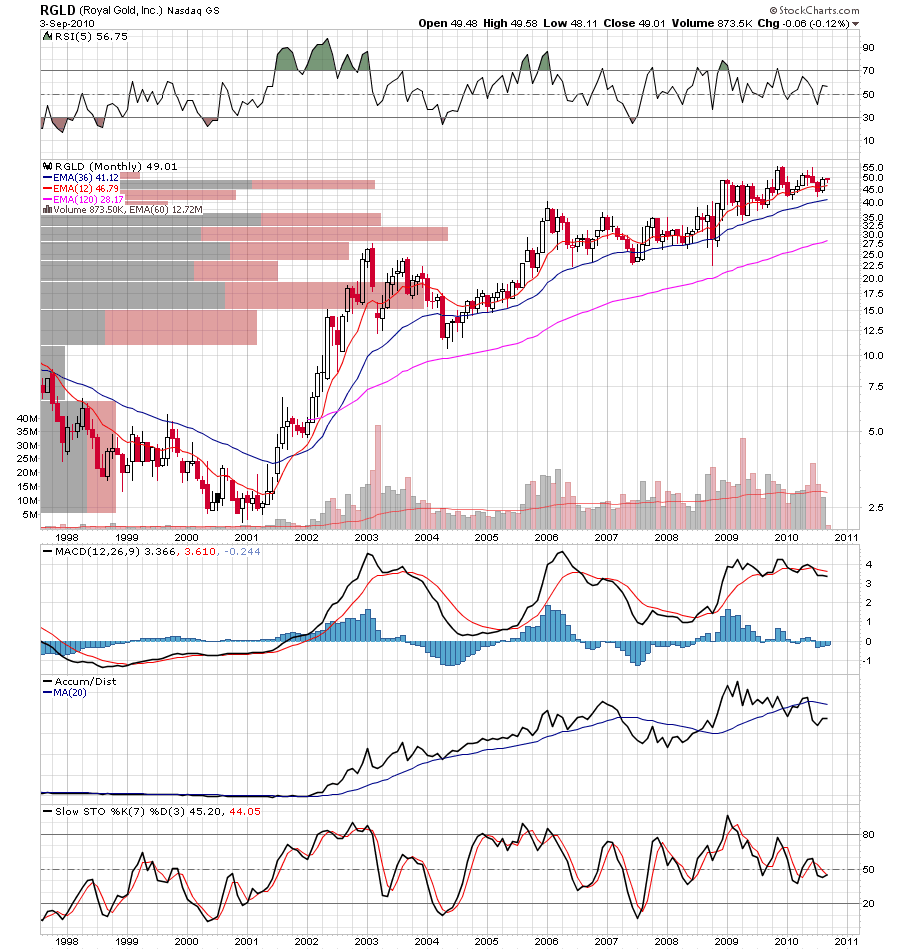 Don’t lament that you were not here at the beginning of the bull in precious metals.  Rather, take advantage of a trend that still lives.   Andgo ahead,  fool around with a couple or three tech names as well, but be cautious, as those should be shorter term plays (within this year) than the PM’s.

Best to you all, and Happy Labours.   Try to keep hold off some of it, eh?