Unless you are living the hermit’s life, under a rock within a deep dark Paleozoic cave, you are aware that next Saturday’s NCAA Final Four College Basketball Championship will feature two Kentucky rivals in a battle to determine who will represent the state in the National Championship game. Despite being a huge fan of the (currently) nine-point underdog Cardinals, I am experiencing Zen-like calm and good feeling.

You see, like with my “What Me Worry?” New York Giants earlier this year, I never expected the Cards to get past the second round of the Big East Tournament, never mind the far more expansive NCAA Tourney.  But like my Superbowl winning Giants, the Cards have considerably outperformed my expectations.  Using a mixture of psychotically wearying man/zone defense and pure will power, they have won their last eight games in a row, taking not only the Big East Title (like eventual NCAA winners UConn did in 2011), but also beating all reasonable odds to arrive in the Final Four this weekend.

They took out Michigan State like they were a bunch of soft muppet Goldman clients, not the eventual Tournament Champion I had slated the Spartans for in my personal brackets.  They followed that win by beating an absolutely on-fire, can’t-miss-three-point-shooting Florida Gator team seemingly through psychological intimidation alone.  It was truly miraculous, and I am now happy to the point where my inborn Irish sense of karma has me looking out for fast-approaching meteorites.

Because I can’t lose now, really.  No one expected my Cards to do this well, just like no one expected the Giants to get into the playoffs in early December.  Or to beat Green Bay or San Francisco (and not have to play New Orleans again!).  Therefore I am playing with house money right now…

And guess who has to win it all this year or be seen as ultimate chokers?  Do you think maybe it’s that team with the five “sure fire” top ten draft picks? The Blue people from down the road, east of us, in little Lexington?

Can you feel the warmth of my smile from here, my friends?

On a more serious topic, I was also  going to write about the possible Civil War brewing with regard to the Supreme Court’s coming decisions regarding the Commerce Clause and its relation to Obamacare.   However, I don’t wish to spoil my current mellow mood, so I will hold off, probably until tomorrow.  Suffice it to say — for now — that this may be the most important Supreme Court decision since the New Deal Era (error?).

More tomorrow.  Let tonight be about the (relative) innocence of college hoops.

As for the stocks and other investments this blog is supposed to be about, well, I felt good enough about the state of the dollar and the silver market to add a significant portion of SSRI to my portfolio.   I think it’s inexpensive here, frankly, and likely trade bait at some point.   That was all I added however, as I am still bound by caution here as we approach the end of the month and the Ides of May.

My best to you all.

A Short Introduction To Louisville Hoop, Circa 2012:

END_OF_DOCUMENT_TOKEN_TO_BE_REPLACED 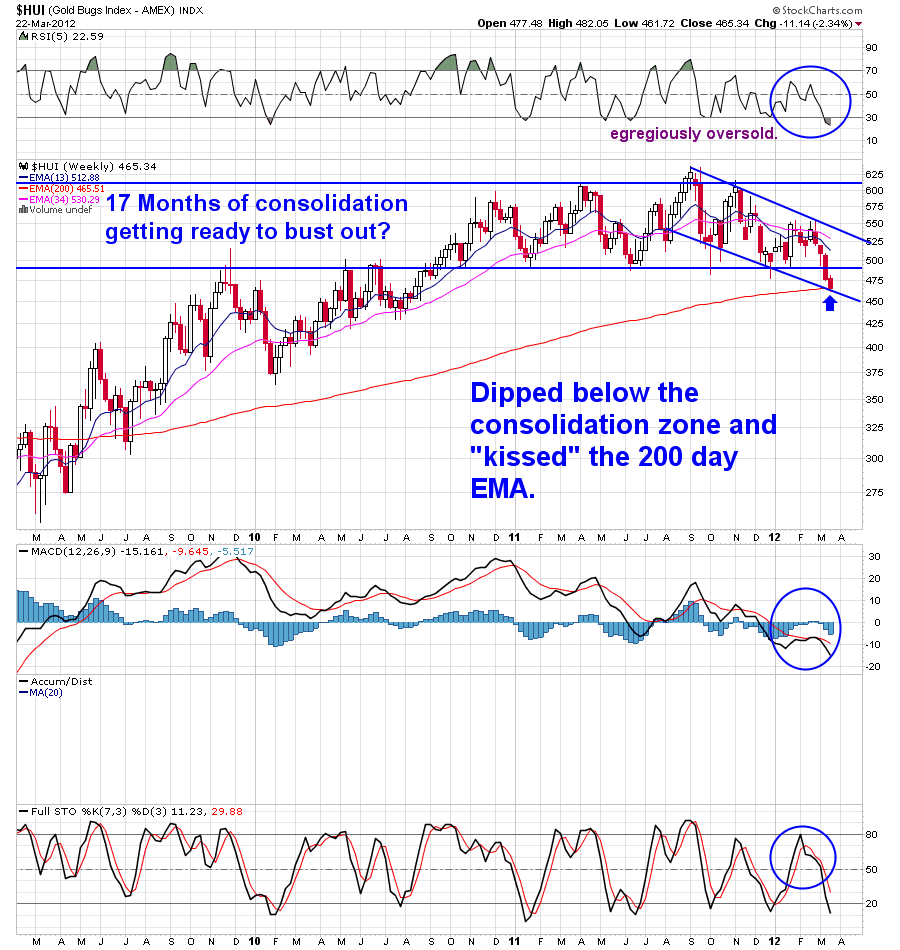 Yes, the Cards kicked ass in their usual inimical, erosive fashion, but the Lucky Birds are you today, my friends, not my 13 point winning, New York Giants imitating Louisville Cardinals.  Why you ask?

I’m  going to grab some GDX and GDXJ, today as I think we’re close to at least a tradeable bottom.  We will likely have to be somewhat nimble, but I think this might be the nadir — especially if the dollar moves down into an intermediate cycle low.  ANV and BAA are my best individual bets for the risk takers.

For those among you who are adventurous… the cheap stuff on the silver side is really, well… cheap  !  SSRI is looking especially tasty here, for example, as is AG.  EXK already started taking off yesterday.  Of course SIL is there for those looking for “pool” instead of “pond.”   Note also, the rare-earths as well.  If the dollar drops, they will all benefit.

Have a great weekend, and go Cards (and Cats and Hoosiers, whoops! I win either way on that one!).

END_OF_DOCUMENT_TOKEN_TO_BE_REPLACED

Newton says that a body in motion remains in motion unless acted upon by another force.  Right now that treatise translates well into the action provided by our tentative bull market, perhaps best exemplified by the individual success of one CRAAPL, Inc.

Do I trust this momentum?  Not for a minute, especially not with the struggles my belleweather precious metals stocks have been enduring — a precursor perhaps to the interest rate battles that loom on our horizon.   Will I play the momentum, however?  Of course I will, but with names that makes sense in the broader scale.

Right now, agricultural stocks are starting to make a stealth comeback… moreso those stocks who are largely designed to assist farmer’s yield.  Why?  I believe it’s because the farmer’s cost of capital has increased, despite our low interest rates, thanks to the ridiculous bull market in farm land prices.  Just in Southwestern Indiana alone, farmland that sold for $2,500 to $3,000 an acre six or seven years back is now going for well over $10,000 an acre, and in some cases being sold at auction for $14,000 an acre.  In places like Iowa, the values are coming in even higher.

All of that means that farmers need to increase yield value — even at $6.50 a bushel corn — in order to make a return.  That bodes well for fertilizer companies like  MOS and POT for example.  These are  two potential breakouts that are not quite ready for prime time, in my humble opinion.

Not so unready, however, is my MON-ster, which has been running nicely since the first of the year, and only recently experienced a pullback.   I think it’s the pause that refreshes, and the next stop is breaking out of this consolidating triangle (on the weekly) to take out the top of this fibonacci retrace: 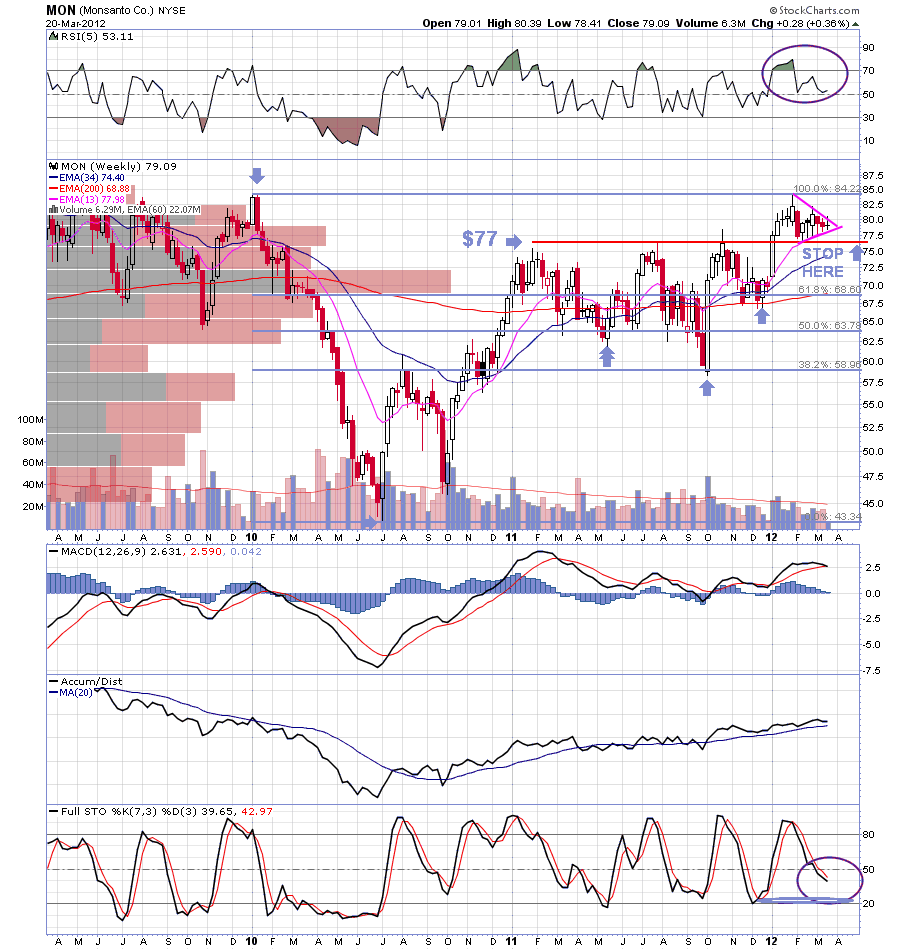 Your relatively low risk stop is pretty obvious on the above chart (below $77.00).  Your upside is broad.  In the bad old days, MON got as high as $154 a share.   I think eventually it will leave even that number behind.

I think we can agree we are in a bull market– at least for the moment — even as we clamber up the Wall of Worry together, pitons digging for purchase, ropes securing us and sealing our collective fates should we drop.   If we are going to take advantage, let’s go after the stocks that have been making sense this year without making a big drunken fuss about it like CRAAPL.   That’s the ags, and I’ll have more on this subject.

END_OF_DOCUMENT_TOKEN_TO_BE_REPLACED

While I wait on the precious metal markets to resolve themselves, I’m subsisting on a diet of heavy metals and pure refined sugar.  If I taper off in my blogging in the coming days it’s likely because I’ve transformed into a Brundel Fly.

As mentioned, AVL , REE, MCP have been moving nicely (although tapering off a bit at the end of the day), while the PM miners tread water trying to catch a bid from the falling Uncle Buck.   I did note that BAA finished back above $5.00 again.

Nope, the only thing that really stood out today in the areas I’m looking at was a refiner… and no, not the petroleum and kerosene variety, but the lonely sweet variety, sugar shack shifter Imperial Sugar — IPSU.

There have been all kinds of articles about sugar being the commodity of 2012, and I take them all with a grain of salt (no pun intended).  I do, however, like a decent looking chart when I see one, and this one promises at least some continuation on today’s high volume, high percentage move.   Just like the last time we got a high volume candle, I think we’ll get at least two more days out of this, which could very well bring us to our next resistance, at the underside of the 200-day EMA, or appoximately $7.60. 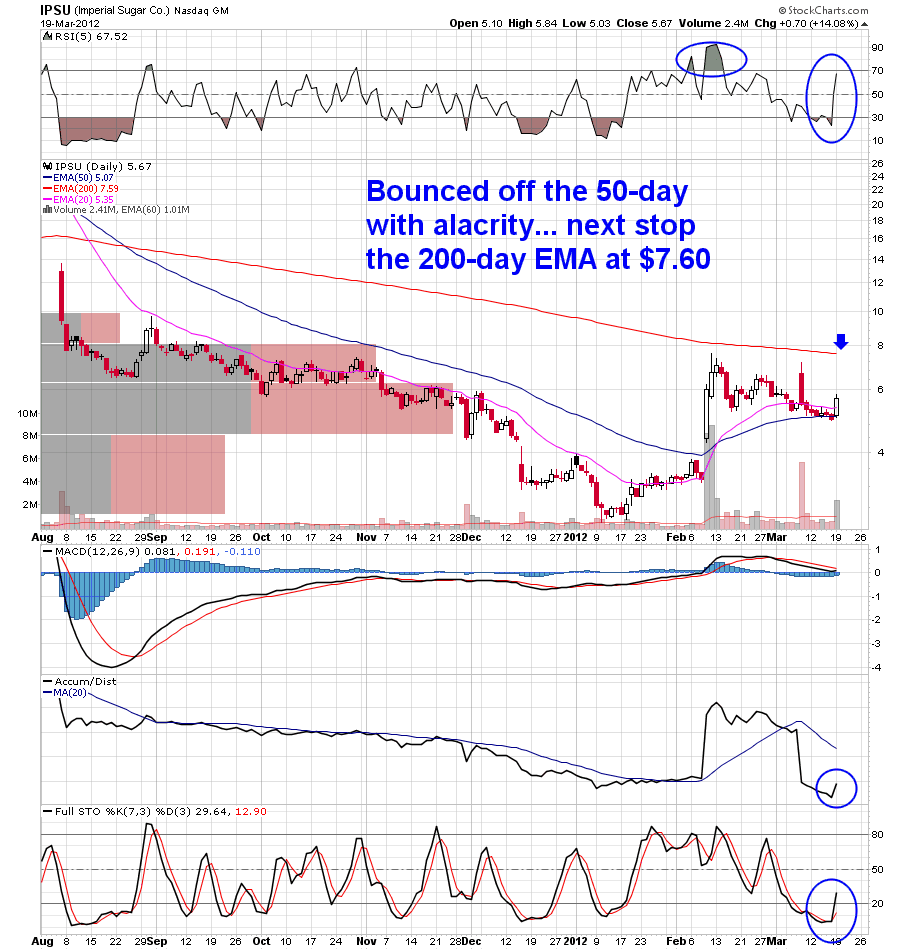 For those checking the math, that’ approximately 34% over today’s close.  Do you feel lucky?

END_OF_DOCUMENT_TOKEN_TO_BE_REPLACED

Feel it in the Air (Gap) Tonight?

I’ve been lying low, deep within the underground catacombs of my hardened cee-ment (sic) bunker, waiting for the air to change before speaking with you again.    Last week the dollar was on the edge of a knife, and it looked like it was poised to strike a blow against my precious metal position that even I, in my well-defended fortress– Haz-mat suited and full-fetal positioned– would find difficult to withstand.

But this morning, after a 36-hour narco-nap, I decided to “up-periscope,” fully expecting to witness scenes of post-apocalyptic societal dissolution.  Instead, I found these guys scurrying about, handing out large wads of $100 dollar bills for 500 yuan a piece.

Is it possible we are just enduring one last head fake before the dollar re-asserts itself and makes mince-meat pies out of all my lovely precious metal and rare-earth positions?   It’s certainly possible.

But for now, I will revel in the respite, as Stealth-Bernank and the Chinese work out their differences and my “tell-tale” stocks  — UPS, FCX and the rare-earths (REE, MCP, AVL, QRM) move nicely here.

I also like SSRI, here, mostly for the pricetag on its silver.

God bless, and I hope to be with you more often this week.

END_OF_DOCUMENT_TOKEN_TO_BE_REPLACED

I just got home and it looks like the golds/silvers had a crappy day, but it also looks like the dollar is falling tonight while the commodity complex, and especially earl, are rallying.  Oversold and out of favor are my two favorite paradigms, but I’m not telling you what to do if you are nervous here.

Me? I’m gonna do like Slim and ride the bomb.  I’ve got meetings all over again first thing tomorrow so I won’t be able to look in via anything else but Crackberry til mid afternoon.  In the  meantime, if you’d like to discuss things, open-thread style — and that means anything — I declare this blog a Mario Savio Free Speech Zone.