(Slowly, slowly now… no need to be hasty, but I like RGLD and AEM a lot.)

END_OF_DOCUMENT_TOKEN_TO_BE_REPLACED

The Signs were out there, that’s for certain. They glow more balefully–frighteningly, perhaps — by the day.  Soon you will find that their light will transform into warmth, and voila! — you are out of the cold.  This week we saw the $HUI:$Gold ratio approach it’s late 2008 nadir, despite the lack of any similar shade of trouble in the SPY or any other major index for that matter.  For many who have been suffering through this mind searing mini-bear in the miners, it was only one more pencil in the vile jellies.  For me, it was the light at the end of the tunnel.

Adding reassurance were the hairshirt boys and the plungers.  The hairshirt boys talked about “$21 dollar silver” and gold “heading back to $1200” this week.  More music to my ears.  Then the dear plungers.  Those who can always be counted on to ring the bell at the exact wrong time were actually starting to short stocks that had been pummelled for months now, quality be damned.   Again, the scent of ambrosia, the ply of relief.

Can anyone predict the future?  Only in Tom Hanks movies involving haunted vending machines, my friend.  But there are time tested truths for all markets, and for the precious metal markets especially.   Perhaps the hardest and truest is that both the bulls and the bears will suprise the hell out of you in this space.  Such is the lot of a smaller capitalized, politically sensitive commodity group not exactly known for it’s GE-like management style.  But an ancillary truth resides in the recovery from both a bull and a bear… namely, the harder the band is pulled either up or down, the greater the snap back to the up or downside.

Recently we’ve seen near-unprecedented disintermediation between the price of the miners and their underlying commodity in both gold and silver.  Some of this is a result of input (cost) prices rising while commodity prices are remaining stagnant or falling off.  Some is the result of rational hedging, and some the result of anticipatory momentum trading.  It’s this last that has brought us to our most recent state, where one might say the blood in the streets approaches the door-level on our three-step brownstones.

But make no mistake, things are not going to be “different this time.”  We’ve seen this all before, and the results have been similarly spectacular.   We may have one more final “terrier shake” to throw the last remaining weak hands off the bus, but I have little doubt that the Fidelitys, the Blackrocks and the other large funds are right now gobbling up even more SLW and RGLD and AEM and AUY than they were last quarter.   And AG…. oh my yes, AG.

I expect one more pullback today and perhaps into early next week, but I will initiate buys in AEM at any price under $40, if I am so lucky.  Get yourself a dividend while you enjoy the rebound, why don’t you?  You can always use the extra beer money, no?

As for our friends in the smaller silver market, I would think next week the safer bet, but if we see some pullback today, I wouldn’t gainsay your taking some risk.  After all, for EXK to get back to a mere $7.00 (!!) is an almost 21% move from here.  EXK will be $10 before next Christmas, if my predictions weigh out properly.

END_OF_DOCUMENT_TOKEN_TO_BE_REPLACED

This Is About Par for the Course

Moober can vouch for this.  Woodshedder and Fly as well.  Back in 2009, after one of the worst precious metal (and overall market) meltdowns in my lifetime, I started to plow back into the precious metal markets in the middle to third week of February.  I was early.

Oh boyo, those were a painful two weeks plus, I’ll tell ya.  But as I recall, we bottomed right around the end of the first week of March (the sixth or seventh?). It was glory days for the PM’s after that, right into 2010.

So I was feeling real good about getting back in during the first week of February.  Real good.  I guess I should have held off maybe two more weeks, eh?  Ah well, let’s just say that we are running into the same exact kind of  egregiously oversold market conditions we saw back then.  Given the tenor of the rest of the market, and the gobbets of fake money-digits entering the global economy via the cake-batter hoses of the world’s central banks, this is an insane and untenable condition.

It will not continue.

I will not add here, but wait until the turn is in.  I’ve saved a little something for the insanity.

END_OF_DOCUMENT_TOKEN_TO_BE_REPLACED

I Got Somethin’ for Ya, Pal 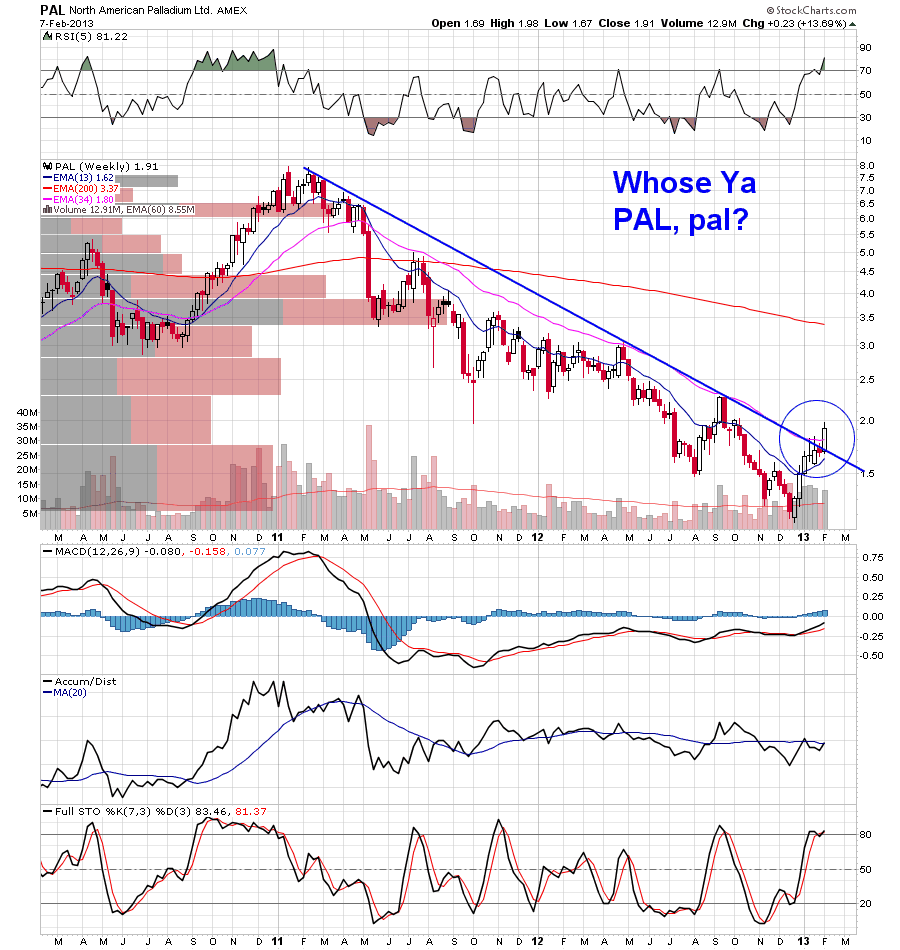 Here’s a stock I’ve purchased quite a bit of in the last week, pal.  North American Palladium (PAL) caught my eye because it showed a bit of a sea change on the long term chart, and this past week, it’s established itself up above that long term trend line. Check this out:

Can it get to $3 bucks from here?  Pal, I wish I could tell ya for sure.  Alls (sic) I know is that’s a lot of buying in 2013 (black volume sticks), and the trend has changed.  I’m holding onto my stack until at least June, so let’s see.

I also like AUY right now, and of course, you should be accumulating RGLD at these ridiculous prices, and SLW on every opportunity.

END_OF_DOCUMENT_TOKEN_TO_BE_REPLACED

Just a head’s up to you American football fans.  My brother, sometimes seen here as “#6” has produced a commerical running this Superbowl, for the new Crackberry Q10 product.  If there are any subsequent spikes in the stock price, we take all credit here.  It goes without saying that we disavow any subsequent tankage, to the point of denying ancillary patrimony.

Please feel free to place all reviews here.  If there are any other commercials you favor, you may comment about them as well.

For you non-American football fans, please repair to your usual quiche and Belgian ale consumption.

END_OF_DOCUMENT_TOKEN_TO_BE_REPLACED

A Considerable Sum on Silver, Please

Sorry I haven’t been around to keep company.  I’m being kept by many companies.   At first glance, if you look at my favorite universe, it seems like it’s hand holding time.  However, I’ve looked over my long term charts tonight and I can’t believe how cheap some of these miners are trading right now.  SLW has held up reasonably well, but AG and EXK are Christmas presents here.  Get them for your kids.  RGLD continues to take hits, but mein gott it’s tasty here.  I like AUY and even BAA, as well.

I held off the whole month of January, and did not spend any “year end funds.”  That changes tomorrow.  I’m getting more of “all of the above,” but will keep some dry powder for further Crazy Eddie liquidation sales.  Everyone is printing folks.  Every one is racing to the bottom.  If you think that will hurt the precious, you need to have a look at how much Blackrock and Fidelity own of RGLD, and how much they’ve accumulated recently.  If you think they are the dumb money, well… God bless.