SUB-PRIME AUTO LOANS; GET OFF THE GAS: SHORT VIA $CACC

$CACC – Credit Acceptance Corp has been in the subprime used auto loan game for a long time, since 1972. The company currently sports a market cap of $7bln (enterprise value of almost $10.5 billion, inclusive of $3.45bln in debt), with a P/E of 15 on earnings of $24* a share driving a current market price of $360. The short thesis that will be laid out in this article will be driven by a steep drop in earnings on a go forward basis due to an increase in realized credit losses. One would expect P/E multiple compression to be a factor as well, once the rally has crested.

The US consumer is more heavily indebted than at any other time in history. The unemployment rate has rarely been lower at sub 4% and all states are currently sub 7%. Consumer debt stands at $12.96 trillion. Student loans are at a record $1.36 trillion, sporting an 11.2% delinquency rate (Powell put?). Auto loans outstanding stand at $1.21 trillion ($282 bln to sub prime borrowers) with worsening delinquency stats; 5.8% > 60 days (higher than through the global financial crisis where rates peaked at 5%). Underwriting standards have tightened overall, but the numbers for non-bank subprime auto are worse at just under 10% delinquent (per Equifax). As one might guess, used cars do not result in high recovery rates when things go pear shaped. 107 million Americans carry auto loans at present, +35% since 2012.

This folly can of course continue for a while longer. $CACC’s cost of debt is currently just over 4%. Their most recently completed $450mm subprime auto loan securitization (non recourse) was well received. Zerohedge recently wrote on the phenomenon “Junk in the trunk” and included the recent auto loan delinquency table. Similarly generically named (i.e. ACME Auto) Consumer Portfolio Services, Inc.  (CPSS) recently completed a $40mm securitization of their residual interests in 13 previously completed securitizations. Feed the ducks when they are quacking, indeed. 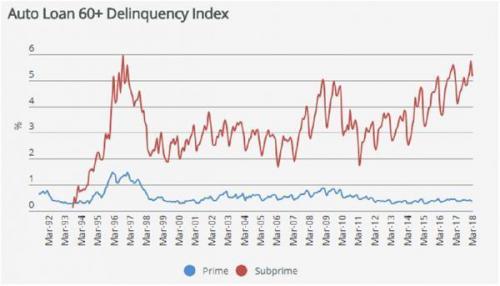 Things that should worry the bulls:

Similar to strategies like selling volatility, lending money on easing terms to sub-prime borrowers can be a recipe for lackluster investment returns, if not outright disaster. Credit Acceptance Corp clearly has the data to provide further stratification, but instead disclose that 95.6% of their clients are sub-prime (< 650 FICO score).

Car loan term extension. 5 year ago the average car loan was 48 months. No more …. over 40% are now 61-72 month and 32.5% are 73-84 months. Moving on to the used segment, terms have also been extended. CACC’s average loan term for advances on used cars stands at 50.4 months (almost 20% longer on a rolling 5 year basis). Cars financed at 20% interest rates do not yet easier to own with the passage on time.

Considerable time is spent in the annual reports of CACC on the merit of stock buybacks versus dividends.

A sample from the most recent 2017 report:

“Like any profitable business, we generate cash. Historically, we have used this cash to fund originations growth, repay debt or fund share repurchases. We have used excess capital to repurchase shares when prices are at or below our estimate of intrinsic value (which is the discounted value of future cash flows). As long as the share price is at or below intrinsic value, we prefer share repurchases to dividends for several reasons. First, repurchasing shares below intrinsic value increases the value of the remaining shares. Second, distributing capital to shareholders through a share repurchase gives shareholders the option to defer taxes by electing not to sell any of their holdings. A dividend does not allow shareholders to defer taxes in this manner. Finally, repurchasing shares enables shareholders to increase their ownership, receive cash or do both based on their individual circumstances and view of the value of a Credit Acceptance share. (They do both if the proportion of shares they sell is smaller than the ownership stake they gain through the repurchase.) A dividend does not provide similar flexibility. Since beginning our share repurchase program in mid-1999, we have repurchased approximately 33.4 million shares at a total cost of $1.6 billion. In 2017, we repurchased approximately 610,000 shares at a total cost of $123.5 million.”

It is separately disclosed that CACC is fully restricted in paying any dividends by its Lenders ($3.45bln and the Lenders get paid 1st from a priority of payment perspective). Dividends matter and CACC management can not claim to be Warren Buffett, despite the impressive track record CACC has logged. There is no portfolio effect to be relied upon in this instance. CACC finances used cars to insolvent borrowers at above market interest rates in the hopes that the net margins secured over numerous economic cycles compensates for the considerable risk assumed. Estimating the intrinsic value of CACC at any point in time is poppycock as a result. Caveat emptor, especially CACC themselves in buying their own stock. Red flag.

CACC have not repurchased shares since $220. CACC, “If we are inactive for a period, shareholders should not assume that we believe our shares are overvalued.”

$CACC’s  P/E of 15 seems quite punchy for a sub-prime auto lending operation. Much better diversified banks are lower; WFC 13.6X, RY 12.5X and WBC 11.7X. In the exact same space the valuation asymmetry is even more marked. Santander Consumer USA Holdings Inc. ($SE) has a similar market cap ($6.9bln) yet sports a P/E of 5.9x

GM bought AmeriCredit (ACF) for a 24% premium to the then public equity valuation in July 2010, 1 year post a $50bln bailout by the US government while still 61% owned by the US Treasury. In this space, silly can remain silly, approaching ridiculous at times.

Monitor Credit Acceptance Corp. ($CACC). Short interest is relatively high (12%) and the high-beta rewarding market we currently enjoy could see CACC reach towards $400 in calendar 2018 as the indices pinch higher. Remarkably, the only down month for CACC historically is October. With spot at $360 I’d think September might offer a good entry point for a short:

Disclosure: Flat $CACC, monitoring for initiating a short position of 2-3% (of overall portfolio).