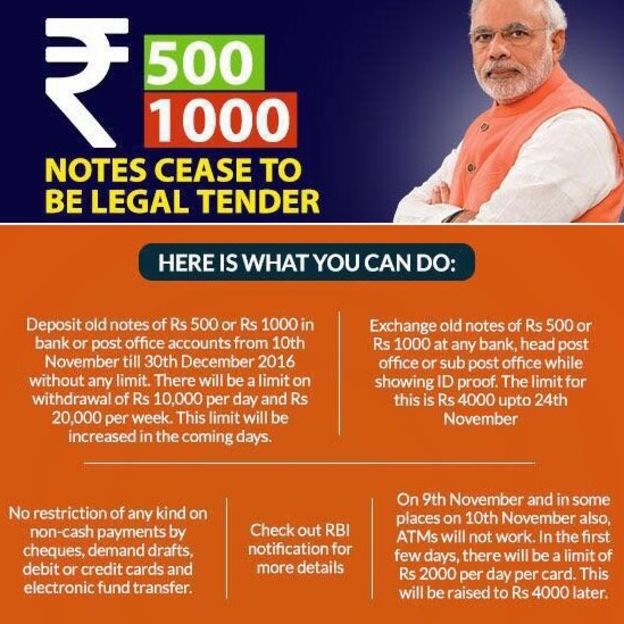 Narendra Modi was even accused of trying the steal the thunder from the US Presidential election with the timing of his demonetization campaign. Trump was having none of it, but it is still the biggest news you have largely ignored over the last week. India has effectively invalidated 80%+ of the legal tender in circulation into coupons that can only be exchanged in specific places and quantities (INR 4,000 initially), with the requisite identity proofs. With the unbanked estimated at 50% of the population and the unpapered estimated at >1/3rd, one can just imagine the mahem that has ensued. USD/INR = 68.56, hence the 500 rupee note is worth US$7.40. Apparently honest people have no need to worry, but in concert with daily limits on ATM withdrawals the public are forming orderly queues, at their gold dealers. The basis between financial gold and physical gold is reportedly skyrocketing in India, a trend that could have legs as other jurisdictions phase out their high denomination legal tender.

Singapore announced the phase out of their S$10,000 (US$7,067) banknote in early 2014. The ECB has plans to stop printing the €500 note (1/3 of € in circulation by value) by the end of 2018. All of these moves are defended as another quiver in the fight against tax evaders, organized crime and terrorists. In India, Naxalite, a Communist guerrilla group, mostly associated with the Communist Party of India, are target #1 of Modi’s demonetization plan.

Many fear the war on global cash could have unintended consequences. Some currencies are more fiat, by nature, than others. The USA holds 8,134 tonnes of gold, representing 76% of forex reserves. There has been talk of the US abolishing the $100 note which represents a full 75% of the value of banknotes in circulation, $969bln of $1.3tln. The majority of US$100 bills are held outside of the contiguous US States. I can see Trump eliminating the penny and nickel on economic utility grounds before the $100 is touched, but clearly anything can happen in the Upside Down. India holds 558 tonnes of gold, representing 6% of foreign exchange reserves. The ECB in comparison holds 505 tonnes of gold (28% of forex reserves). The largest gold ETF GLD is backed by 935 tonnes of gold, but the actual gold is unallocated (i.e. financial gold).

Tax collection rates in India are abysmally low, due in large part to agriculture at 60% of GDP being a tax exempt sector. As one would expect with a billion + populace, VAT (Value Added Tax) receipts dominate. Demonetization has come on the heels of a disappointing tax amnesty program that was touted as having the potential of outing 30 tln rupees worth of “black money” (625.5bln was recovered onshore, > $100mm USD).

Allocated gold is likely to catch a bid in the current environment, regardless of the trajectory of financial gold. JCG