If they ring a bell at the top of the muni bond market, this muni bond issue will be the poster child. Muni investors have long been considered the “C students” of Wall Street, but even for them, this may be too much.

McKinney ISD (Independent School District), Texas just voted yes to a new $220mm tax exempt bond issue which will help finance a $72,800,000 football stadium for their high school, yes their high school. Even though MISD is projected to grow by a scant 71 students (net) per year over the next 5, it has been determined that this all makes abundant sense. Most sane voters (Grassroots McKinney) would squash such financial folly, but the proponents of the deal, labelling themselves “Vote for McKinney’s Future” included the $50.3mm of “new” stadium earmarked money ($10mm was previously spent for the land and $12.5mm of debt was raised a full 16 years ago for the stadium) into a larger debt deal with sensical use of proceeds as a means push through this farcical stadium plan. The only way this could be more emblematic of the funk taking place in US of A is if it carried the name TRUMP stadium. A 10 year stadium naming rights deal could at least have resulted in some savings versus the ridiculous budget  for this open-air teenage concussion petri dish. 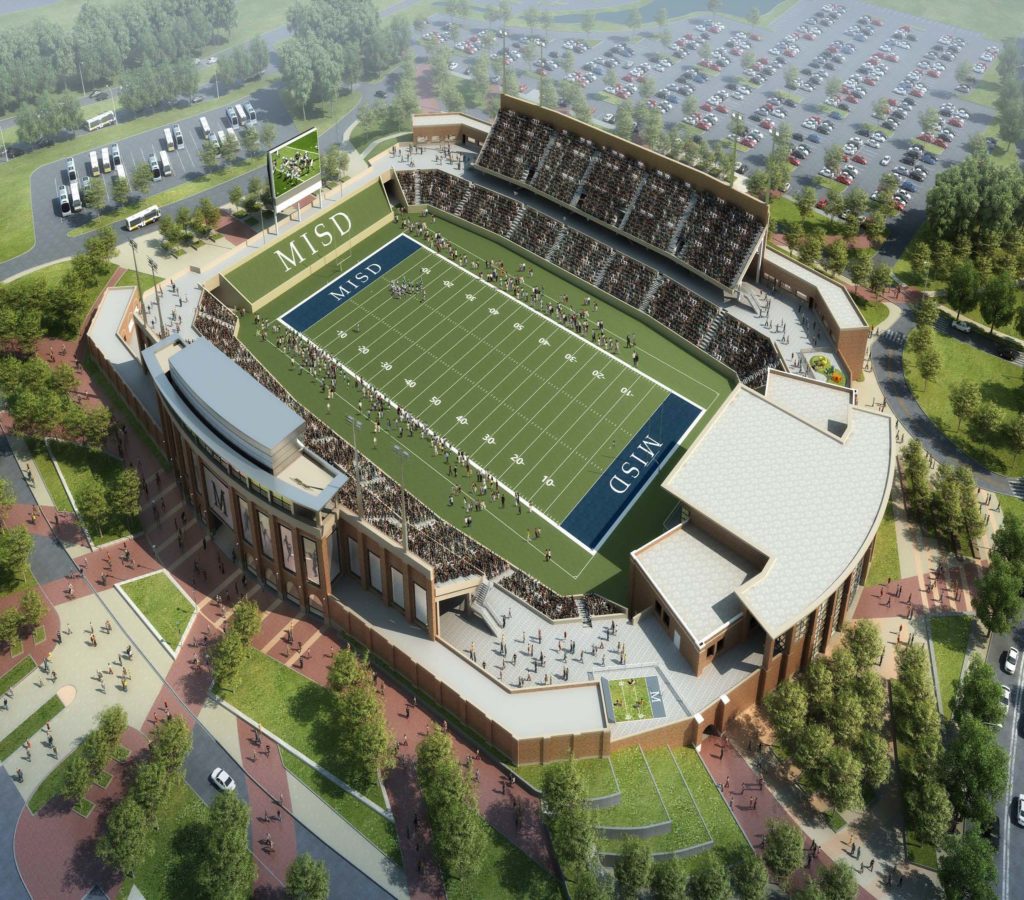 This is far from an isolated case. Allen ISD is only a few miles away from the planned McKinney stadium, seats a much larger 18,000 and was built for $60mm (bargain). KATY ISD (near Houston) is in the final throws of approval for their very own $62.5mm cost, 12k capacity high school football stadium. The KATY ISD was established in 1898 and includes 60 school with a total annual budget of $785mm. KATY is ranked 13th place within Texas. One would think a top 10 academic placement might be a pre-requisite for spending $50mm+ on a stadium for a non-pro sport, played by teenagers, that may well be extinct or highly amended a decade out (watch the film Concussion, circa 2015).

Texas is a AAA/Aaa rated state. KATY ISD is rated Aa1/AA stand alone, but as with many muni issuers they often procure credit enhancement to get to AAA/Aaa ratings (saves on interest cost for timid muni bond investors that love the idea of a AAA/Aaa rating). The point here is debt is not free. Even if McKinney can get their debt deal done in the mid 2’s, that is still $5.5mm of interest per annum, enough to pay 150 Texas 10 year tenure teachers ($37,000 per teacher). The right be be able to issue debt on a tax exempt basis is a powerful right, in and of itself. Most of the holders of muni debt are the wealthy, the top 10% of taxpayers, with a big concentration in the top 1% of taxpayers. A seemingly paltry 2.5% tax exempt yield is much more attractive when converted to a taxable equivalent basis (TEB) = 2.5% / (1 – marginal tax rate). The 1% are taxed Federal at 39.6% at the margin. There is a 3.8% tax on investment income to pay for Obamacare, but muni interest is exempt making 2.5% tax exempt equivalent to 4.42% on a taxable equivalent basis.

These silos of affluenza are not sustainable, full stop. The World is watching. Smaller government will be a necessity going forward. It will start with towns, which will share essential services (police, fire, education, health care …. high school football stadiums) skimming 20-25% of the bloated unpaid  bar tab for pension and OPEB (Other post employment benefits). Prudent investors should brush up on their Ch. 9 Title 11, Authorization for municipal bankruptcy knowledge. State amalgamation will follow within a decade. We can have a naming competition on the new name for Maine/New Hampshire/Vermont, followed by Washington/Oregon, North and South Dakota, etc.

Each $500bln of frivolous muni debt represent a huge  opportunity cost for the US government. With a weighted average (current) coupon assumption of 2.5% and a marginal tax rate of 39.6% (+3.8% Obamacare tax levy on investments) the Federal tax leakage is 5.4bln (12,500,000,000 of interest income taxed at 43.4%) per annum. Texas has no State tax, the opportunity cost is even higher in the high State tax states like NY and NJ.

All this is happening at a time of near unparalleled uncertainly (GFC aside, but that is a much longer blog …. AIG bailout, TOB – Tender Option Bond Programs, aka “Tons of Blood”, global arbitrage of the steepness of the US municipal interest rate curve gone awry). Puerto Rico (PR), which I have recently written on, will be restructuring their debt, as soon as legally feasible. PR defaulted last week on a large slug of GDB (Government Development Bank) debt. PR’s benchmark 8% 35′ GO’s (General Obligation bonds, top of the food chain from a “priority of payments” perspective) ,are yielding > 13% tax exempt this week (23% + on a taxable equivalent basis even as a Texas taxpayer).

The Federal stance on the PR pension plans will be precedent setting for the woefully underfunded US States. Illinois has the worst pension in the nation (funded 40 cents to the $1), aside from the non-state bastard PR (sub 10 cents funded on a blended basis). IF we see an insolvency at the state level in the next  decade it will be Illinois.

More than 45,000 students in Detroit missed school for a couple of days this week due to the “sickout” staged by teachers, embroiled in a strike. Detroit was the largest city bankruptcy in US history, July 2013 ($19bln).

Something is rotten in the state of Denmark (Shakespeare). JCG