PUERTO RICO – THE SPOILS OF WAR

“Puerto Rico’s Sinking and I Don’t Want to Swim” was the other top candidate as a header. The current maelstrom has many questioning how the US got into this mess in the first place. Spain controlled Puerto Rico for 4 centuries, from 1493-1898. US victory in the Spanish-American war of 1898 saw Spain cede the Island of Puerto Rico to the US under the terms of the Treaty of Paris. The Spanish relinquished control of Cuba, Guam and the Philippines as part of the same conflict, which lasted a compact 10 weeks (fought in the Pacific and the Atlantic, obviously).

At the time of the 1898 handover, Puerto Rico (PR) had a population of under 1 million (Florida’s Puerto Rican American population is now >1mm). The island population is now 3.6mm, and it has been dropping drastically, as the prospects for the Commonwealth (notably not yet a State) have deteriorated markedly. The 10 year phased roll off of Section 936 tax exemptions for PR domiciled manufacturing under Bill Clinton in 1996 was a partial catalyst. The poverty rate stands at 45%. Labor force participation is low with 41% of the working population opting out (choosing not to work). A full 30% of the employed work for the government. Official unemployment is in the mid teen’s. 40% of personal income in PR comes from transfer payments from Uncle Sam and further 27% of the population is on food stamps.

The US$10bln plus in annual US subsidies to the Commonwealth of Puerto Rico (officially termed “stimulus”) is clearly not the long term solution. An unbroken chain of 7 year of PR recessions (shrinkage in GDP is entering the 8th consecutive year) has been the recent reward. Clearly, allowing an unincorporated US Territory admission to the Union as a State is not the path to salvation either.

There are now more Puerto Ricans living Stateside that there are living in PR (60%/40% split as of 2014). 5mm (including those of Puerto Rican descent), Puerto Ricans live in the US, 29% of them having been born in Puerto Rico. Worthy of note is the fact that the Jones Act of 1917 made all Puerto Ricans natural born citizens of the United States. The last thing we need at this juncture is a sea wall. 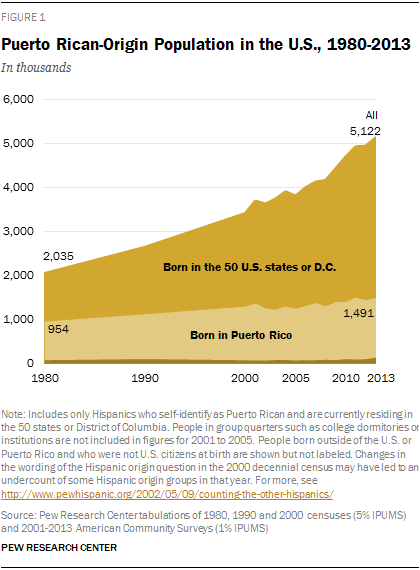 Puerto Rico is all over the press this week on the actions of the PR government to halt payments on their debt through declaring an “Emergency Period” for the GDB (Government Development Bank for Puerto Rico), their financial nerve centre. Governor Padilla previously termed the debt as “not payable” in June 2015. There is a $400mm + interest payment due May 1st hence the “come to Jesus” moment will be soon upon us. There have been efforts to restructure for certain. PREPA (PR Electric Utility) bond holders took a flesh wound haircut of 15% in November 2015. The Commonwealth of Puerto Rico has issued debt via 18 different issuers over the years. COFINA, linking bonds to sales tax receipts has been a popular credit (both insured and uninsured).

While not currently allowed by law (US Congress is working on giving PR the same rights that other US municipalities have under US Bankruptcy laws) a full white flag surrender by Puerto Rico would result in the 7th largest debt default in history. The effects would be far reaching. The full debt tally is pegged at US$160bln or about $44,000 per capita. California, as a comp, is at $11,000 per capita in debt. Ontario, Canada is US$15,600. Detroit was $28,600 before they filed for Ch. 9 bankruptcy protection.

Direct debt of PR stands at $72bln, 80% of GDP. The benchmark Puerto Rico 8% July 1, 2035 GO’s (General Obligation Bonds) are trading in the mid 60’s in price terms (CUSIP 74514LE86 rated Caa3/CC with both ratings on negative watch) . The yield at $66.625 is 12.663%. GO’s are tax exempt securities for US tax purposes and Puerto Rico bonds are triple tax exempt (i.e. not subject to taxation at the municipal, State or Federal level). Muni debt is also not subject to the 3.8% Obamacare investment tax, making it effectively “quad tax exempt”. Converting the low teens tax exempt security yield to a taxable equivalent basis gets you to a 43.40% yield (assuming a 43.4% tax rate and a 23.8% capital gain tax rate). Obviously many bad outcomes are factored in at such distressed levels. Even the bond king, Jeff Gundlach has drunk the cool-aid in moderation (approx. 2-3% weighting in Commonwealth of Puerto Rico 2035 GO’s in his $1.73bln Income Solutions Fund). 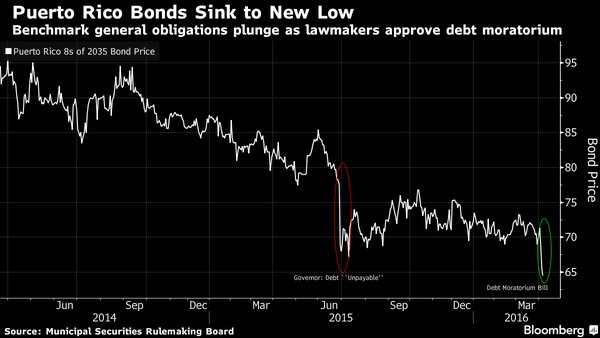 Arguably a bigger problem is the underfunded pensions in Puerto Rico. The total underfunded tally is $42bln at present.The pension plans stand on the brink of insolvency. The funded portion is approximately 10% whereas the worst in the contiguous states is Illinois at 40%. $25bln+ of the PR pension shortfall is from laughably generous legacy (pre 1990) pensions  (grandfathered) that call for a 75% pension, based on the retirees best 3 years, drawn as early as 55 years of age (with 30 years of service). Tweaks made to the system over time have resulted in the defined benefit model being replaced with a less costly defined contribution plan for participants joining after the year 2000. Full tap out of the pension plans would see conversion to a pay-as-you-go system with a draw of $1bln per annum (a full 11% of the annual PR budget). A full 1/3 of revenue currently goes to debt service.

All eyes are on the US Treasury and Obama, who have signalled support for the preservation of pensions over bondholders by potentially giving pensioners priority of payment over bondholders. This is a very important precedent for municipal finance in the USA and beyond.

330,000 current PR pensioners versus deep pocketed bond investors (many 1%ers, incl. hedge funds) is not that hard to handicap. As Puerto Rico goes, so goes Illinois and California, would be the thought.

The US Muni bond market is immense at $3.7tln-$4.1tln (estimates vary). Given the tax exemption, the bulk of muni debt is held by the top 10% of US taxpayers, either held directly or through investment funds. Upwards of 75% of the US fund complexes own Puerto Rican debt. Given the current distressed status of the credit (investment grade ratings are a distant memory) there are few new buyers, as on a suitability metric, there is a skull and cross-bones on the credit. What are termed cross-over buyers, primarily hedge funds, are the ones with the fin piercing the water’s surface recently. Estimates peg hedge fund ownership of PR debt at >20% (par amount). It should be noted many hedge funds call Puerto Rico home as well, fully gated as one would expect in an environment reminiscent of The Wire (without the clever police work). Acts 20 & 22 circa 2012 tax hedge funds at 4%. As an aside, crime has been a big factor in the travails of PR, with the crime index tracing in the mid 60’s versus 50 for the USA. That said, the murder rate in 2014 touched a 15 year low of 681 (down 40% from the official high of 1,164, but some pegged the high at 2,000, more than 5 homicides per day).

Muni debt investors are overall a conservative lot. Monoline insurers have been a long standing fixture of the US municipal market whereby insurers “wrap” the credit risk of the muni (for a fee) to make the debt more saleable in the marketplace due to the higher ratings assigned to the debt. For insured debt, the owner has the comfort that to lose money due to default, they need both the issuer and insurer to default. The mechanic of the payout on an issuer default is different than a credit default swap (CDS). With an insured bond (monoline wrapped) the insurer is on the hook to pay periodic interest and principal payments (i.e. sinking fund payment, final principal repayment) when due, as per the underlying Bond Indenture. 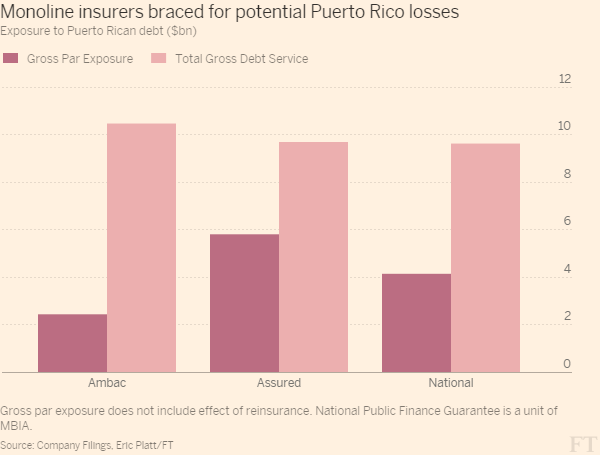 Monitor the PR situation, especially if you own muni bonds. Monitor to PR pension situation if you are a taxpayer. Opportunities will likely arise out of the ashes. Monitor the monolines, esp. Assured Guaranty (AGO) and MBIA (MBI). Look for excessive spread widening as a potential opportunity to buy investment grade muni credit that widens in sympathy. Closed end funds will likely trade at  deeper discounts to NAV. State specific funds from the high tax states may get unduly beaten up. Get some help with this, as muni investing is a specialized area. Funds are likely the way to go versus discrete bonds given the wide bid/offer inherent in retail clip sizes. For non US tax payers opportunities could arise in taxable muni credit which encompasses closed end funds like Blackrock’s BBN, Pension Obligations bonds (PO’s) and OPEB (Other Post Employment Benefits), all of which are taxable to US investors. Not all jurisdictions have tax treaties, but there is no wht on US municipal debt. 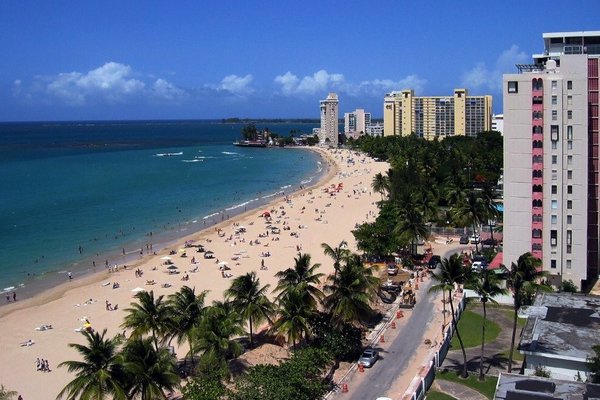 Many layers to this onion, but I’m beyond my optimal word count. San Juan’s Isla Verde was voted the best urban beach but it is likely to be Isla Rojo for a while. Follow me on twitter @firehorsecaper JCG