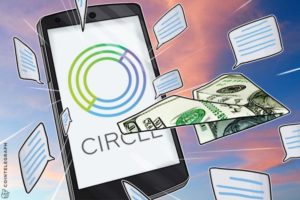 Poloniex, which often boasts daily volumes of more than $2 billion in transactions for over 70 digital currencies, will help cement Circle’s position as one of the leading players in the highly competitive market, the company said on Monday.

While neither Circle nor Poloniex disclosed the value of the deal, Fortune magazine says the agreement between the two Boston-based firms is worth $400 million, according to a source familiar with the transaction.

“We’ve been really impressed with what they have been able to pull off,” Circle co-founder and CEO Jeremy Allaire said.

“They defined what originally people thought of as ‘altcoin’ exchanges,” he told Reuters – referring to the dozens of lesser known cryptocurrency alternatives to Bitcoin.

The value of cryptocurrencies – as well as the number – has ballooned since the start of 2017, when they were worth around $17 billion, according to trade website Coinmarketcap, with their total value topping $800 billion in January before slipping to around $450 billion now.

There are now more than 1,500 digital currencies and tokens, Coinmarketcap said. –reuters

Circle’s app-based network is a peer-to-peer system operating on the blockchain – the technology which underpins the entire cryptocurrency market. Circle plans to launch a retail-focused app for buying cryptocurrencies, dubbed “Circle Invest.”

The company’s backers include Goldman Sachs Group Inc. and Chinese muiltinational Baidu, Inc. – while their deal to buy Poloniex was reportedly discussed with all major investors and regulators before a final agreement was struck on Friday.

The SEC has been cracking down on cryprocurrency exchanges and Initial Coin Offerings (ICOs) – warning last july that they could be considered securities which require regulation under federal securities laws.

“We intend to continue playing a leadership role when it comes to national and global regulatory frameworks for this space,” Circle co-founder Sean Neville told Reuters.

”That includes meeting with the SEC as well as obtaining all relevant licensing required for us to support our customers.”

Regulators are also keeping an eye on the anti-money laundering and know-your-customer (KYC) practices of cryptocurrency exchanges.

A Reuters investigation published in September showed that Poloniex had allowed some customers to trade cryptocurrencies and withdraw up to $2,000 worth of digital coins a day by providing only a name, an email address and a country.

Circle’s Allaire said that Poloniex was fully complient with the “Know Your Customer” checks, however he could not confirm that the exchange had the identities for all clients.

“I’m not sure that 100 percent of prior clients have gone through all their identity verification requests. I know they have a huge backlog of clients in their KYC queues,” he said. “But obviously now that we operate the company we’re going to ensure that the business is compliant in every way it needs to be.”

Sorry New Yorkers, unless you have a VPN!

Residents of New York are sadly unable to participate in the Poloniex exchange due to lack of a state license to operate a cryptocurrency exchange – however Reuters found people circumventing the rule by claiming they live elsewhere.

“Clearly, people can get around things like IP (internet protocol) restrictions, and other restrictions, and people do it all the time. People evade geo-blocking mechanisms, and it’s difficult to fully police. So it’s possible that some people have snuck through that, and that’s obviously something we take very seriously,” Allaire said.