President Trump’s Budget Director, Mick Mulvaney, appeared on Fox News Sunday – one day before the White House is expected to release 2019 spending proposals – where he warned that the U.S. will post a larger budget deficit this year, which could cause interest rates to “spike” (his words) as a result.

That said – the spike seems to have support, as the 10Y went from 2.60% to 2.90% since Friday’s payrolls (along with the inflationary assumptions from the jump in hourly wages).

“This is not a fiscal stimulus; it’s not a sugar high,” Mulvaney said on of the president’s economic program, including the $1.5 trillion tax cut passed in late 2017. “If we can keep the economy humming and generate more money for you and me and for everybody else, then government takes in more money and that’s how we hope to be able to keep the debt under control,” Mulvaney said. –ZeroHedge

In a second interview on Face the Nation, Trump’s tough talking bureaucrat said that rising budget deficits are “a very dangerous idea, but that’s the world we live in.”

Echoing this sentiment, President Trump shot off a Feb 9 tweet suggesting that were there only more GOP in congress, spending would be under control:

Without more Republicans in Congress, we were forced to increase spending on things we do not like or want in order to finally, after many years of depletion, take care of our Military. Sadly, we needed some Dem votes for passage. Must elect more Republicans in 2018 Election!

What may spook rates even higher will be Monday’s budget release from Mulvaney’s OMB – which will include concessions hammered out in the two-year budget deal that Trump signed into law on Friday morning, avoiding a government shutdown (Technically there was a shutdown for a little over 90 minutes). The deal will boost government spending by roughly $400 billion – funded directly with more debt.

Mulvaney said that as a fiscially-conservative congressman from South Caroline, he would “probably not” have voted for the bill.

“The additional spending could increase the deficit to about $1.2 trillion in 2019, and there’s a risk that interest rates “will spike” as a result, Mulvaney said.” –ZH

The Washington Post has perhaps the most dire outlook on the Trump budget – suggesting that tomorrow’s release won’t project a balance for ten years, abandoning the GOP’s long-held goal of eliminating a budget deficit, even over the next decade. 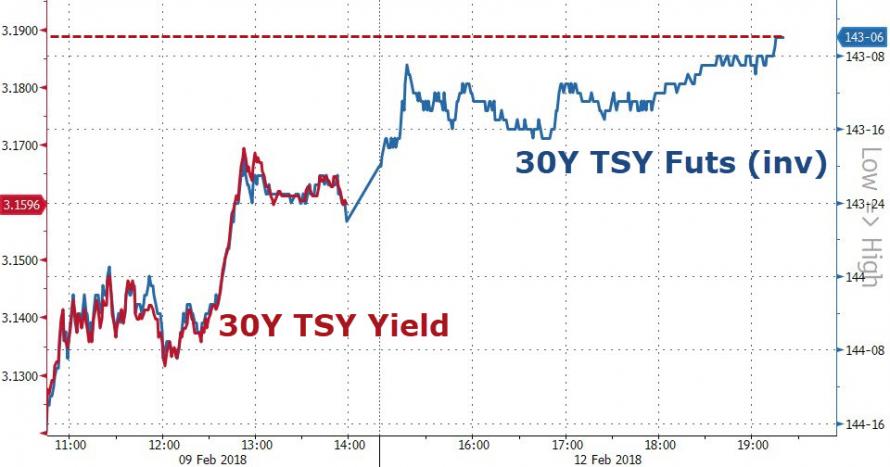 If you enjoy the content at iBankCoin, please follow us on Twitter
2018-02-11
zeropointnow
Share
Previous Buckle Up: Top Invesco Strategist Says Market Whiplash Could Last “Weeks” – Then Get Worse
Next Ray Dalio: Everything Changed In The Last 10 Days