Gowdy “100 Percent” Confident In Mueller, Tells Lawmakers To “Leave Him The Hell Alone” 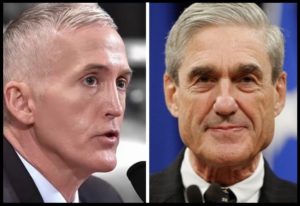 Trey Gowdy (R-SC) says he has “100 percent” confidence in Robert Mueller to conduct a fair investigation if he’s given the proper time and resources, and urged lawmakers criticizing the special counsel to “leave him the hell alone,” the House Oversight and Government Reform Committee Chairman told Fox News Sunday.

(Actually, Deputy Attorney General Rod Rosenstein – who is apparently named in the FISA memo – asked Mueller to do it).

Mueller’s investigation has been widely criticised by Congressional GOP legislators, while president Trump has labeled the probe a “hoax” and a “witch hunt.” Trump reportedly ordered Mueller fired last June – only to back off when White House Counsel Don McGahn threatened to resign according to the WSJ, however Trump has denied the report as Fake News.

Several Republicans in Congress, including Gowdy, have called for the release of a classified memo that purports to show FBI officials abusing surveillance power.

“Republicans would be well served, let the texts speak for themselves, let the jury make up their mind and quit engaging in hyperbole, which we seem to do a lot,” Gowdy said. –The Hill

That said – Gowdy notably did not join fellow House Republicans last month in their efforts to build a case against the FBI and DOJ for “improper” and perhaps criminal mishandling of the salacious and unproven 34-page “Trump-Russia” dossier.

As POLITICO reported at the time, “A congressional aide with knowledge of the meetings said Rep. Trey Gowdy (R-S.C.) was not among the participants. ”While he does believe the FBI and DOJ have recently made decisions worth looking into, he [Gowdy] is and will always be a defender of the FBI, DOJ and the special counsel,” the aide said.

Of course, Gowdy having spearheaded the controversial Benghazi probe puts him on equal footing with the FBI when it comes to Hillary Clinton exonerations.