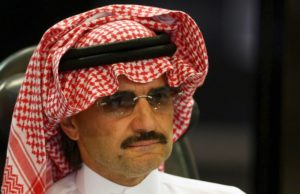 Saudi Arabia’s richest prince, Alwaleed Bin Talal, has been carted off to Al Ha’ir prison after refusing to pay a reported $6 billion to Crown Prince Mohammed Bin Salman following a massive consolidation of power on November 4, 2017 in which over 300 princes, ministers and other elites were rounded up in an “anti-corruption” purge.

Among those arrested on allegations of corruption is Prince Alwaleed Bin Talal, the Saudi King’s nephew who is worth more than $17bn according to Forbes, and owns stakes in Twitter, Lyft and Citigroup.

DailyMail.com’s source claims the crown prince lulled Alwaleed into a false sense of security, inviting him to a meeting at his Al Yamamah palace, then sent officers to arrest him the night before the meeting.

‘Suddenly at 2.45am all his guards were disarmed, the royal guards of MBS storm in,’ said the source.

‘He’s dragged from his own bedroom in his pajamas, handcuffed, put in the back of an SUV, and interrogated like a criminal.

‘They hung them upside down, just to send a message.

Purged princes and the like were taken to the Riydah Ritz Carlton Hotel, where they have reportedly been allowed to buy their freedom by giving up their billions in oil wealth for their lives.

As the Daily Mail reported in November, mercenaries purportedly employed by Academi – a successor to infamous US security contractor Blackwater, have been stringing up some of MBS’s “guests” at the Riyadh Ritz Carlton by their feet and savagely beating them during interrogations. The claims have spread rapidly on Arabic-language social media, and even Lebanon’s president Michel Aoun has accused MbS of using mercenaries.

Meanwhile, none of Prince Alwaleed’s powerful friends appear to be coming to his defense. As CNBC points out:

One of the most stunning aspects of bin Talal’s detention is how quiet his long list of influential friends have been about it. This week brought at least some mention of his plight with a statement from two former French presidents who expressed concern over Alwaleed’s status. But let’s face it: a few words from a couple of French ex-presidents is peanuts.

So now we have bin Alwaleed in an actual prison, with a government aggressively taking cash and assets, and still no significant outcry from his foreign friends.

Bin Salman came to power last summer after King Salman changed the order of succession and made Bin Salman crown prince. In addition to his “anti-corruption” puge to consolidate power and wealth, the country has embarked on an ambitious plan called “Vision 2030“- which aims to modernize Saudi Arabia and break its dependence on oil production, as well as combat human rights violations. 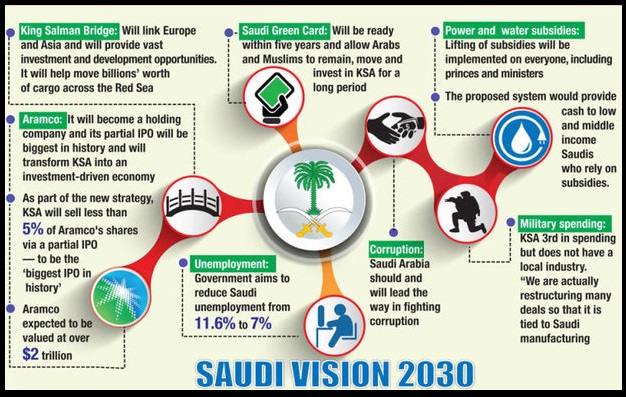 In late September,  Saudi Arabia took the unprecedented step of allowing women to drive. “The royal decree will implement the provisions of traffic regulations, including the issuance of driving licenses for men and women alike,” the Saudi Press Agency said, according to Al Aribaya

Meanwhile, A Saudi Government panel has asked that all marriage contracts for girls under the age of 18 be approved by family courts – the latest step in a series of sweeping reforms under the lead of their new Crown Prince, Mohammad bin Salman. While falling short of outlawing child marriage, the request marks the first major legislation involving the long-standing practice primarily overseen by Saudi clerics and local judges – not family courts.

The proposed legislation was part of a series of recommendations by the Committee of Islamic and Judiciary Affairs last Monday, which also called for “competent” family courts to oversee premarital virginity tests for girls under 18.

“The committee acceded to have those under 18 submit their marriage contracts, as well as a pre-marital tests to a competent court to determine their case” –Councilwoman Dr. Eqbal Darandari

“Some Shoura members disagreed with this decision because they believed it meant we condone underage marriage,” said Darandari, adding “Others suggested that only those between the ages of 16-18 can transfer their cases to a judge, and those below 16 cannot get married. Some members demanded this be applied to underage boys, as well.”

Dr. Darandari is among several Saudi legislators who believe in an an age limit for underage girls’ to marry. “Girls’ voices must be heard and their opinions taken into consideration. I don’t believe a pre-marital test is enough. In my opinion, I think we need a female committee — made of a doctor, lawyer, psychologist and social worker — that studies the girl’s state in order to assess whether or not she can get married.”

She also warned of the damage which can occur to children who are forced into marriage.

“Those that are fifteen or younger can undergo severe physical and psychological damage through marriage, and they’re probably unequipped for it. I believe there should be sanctions to those who do not adhere to that, and in the case of a marriage during that delicate age, a girl’s right to demand a divorce if things don’t work out should be guaranteed.” –Dr. Eqbal Darandari

So there you have it – Bin Salman is attempting to modernize his country, while wrestling power from long-standing oil families. For those who don’t comply with their cucking, it’s off to jail…

If you enjoy the content at iBankCoin, please follow us on Twitter
2018-01-13
zeropointnow
Share
Previous Your Car May Soon Start Serving You Ads – Unless You Pay Up
Next Major Crypto Exchange Goes Dark For 48 Hrs While Bitcoin Wobbles On South-Korea Crackdown