According to the New York Times, the FBI investigation into Russian collusion began after drunken Trump campaign volunteer, George Papadopoulos, reportedly told Australian diplomat Alexander Downer at a London bar in May, 2016 that “Russia had political dirt on Hillary Clinton.” When DNC emails began to leak, Australia apparently contacted US intelligence to report the drunken admission by Papadopoulos – igniting the Russia probe. 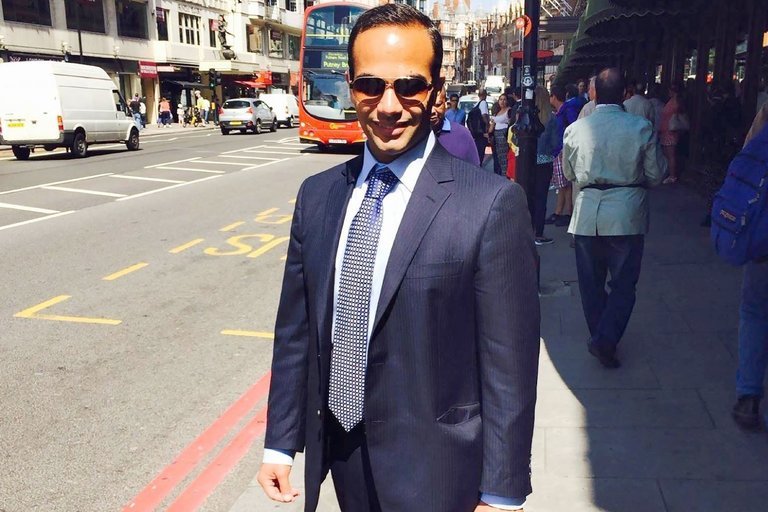 This is in stark contrast to GOP leaders who say that a salacious and unverified 34-page opposition research dossier triggered the probe, a claim repeated by President Trump on Tuesday:

WOW, @foxandfrlends “Dossier is bogus. Clinton Campaign, DNC funded Dossier. FBI CANNOT (after all of this time) VERIFY CLAIMS IN DOSSIER OF RUSSIA/TRUMP COLLUSION. FBI TAINTED.” And they used this Crooked Hillary pile of garbage as the basis for going after the Trump Campaign!

WASHINGTON — During a night of heavy drinking at an upscale London bar in May 2016, George Papadopoulos, a young foreign policy adviser to the Trump campaign, made a startling revelation to Australia’s top diplomat in Britain: Russia had political dirt on Hillary Clinton.

About three weeks earlier, Mr. Papadopoulos had been told that Moscow had thousands of emails that would embarrass Mrs. Clinton, apparently stolen in an effort to try to damage her campaign.

Exactly how much Mr. Papadopoulos said that night at the Kensington Wine Rooms with the Australian, Alexander Downer, is unclear. But two months later, when leaked Democratic emails began appearing online, Australian officials passed the information about Mr. Papadopoulos to their American counterparts, according to four current and former American and foreign officials with direct knowledge of the Australians’ role.

The NYT’s Adam Goldman – who worked on the article as part of a six-person effort, tweeted the report, stating “Dossier had nothing to do with @FBI opening July 2016 investigation into Russian election meddling. George Papadopoulos outreach op and Russian hacking did,” which the NYT’s Maggie Haberman retweeted. 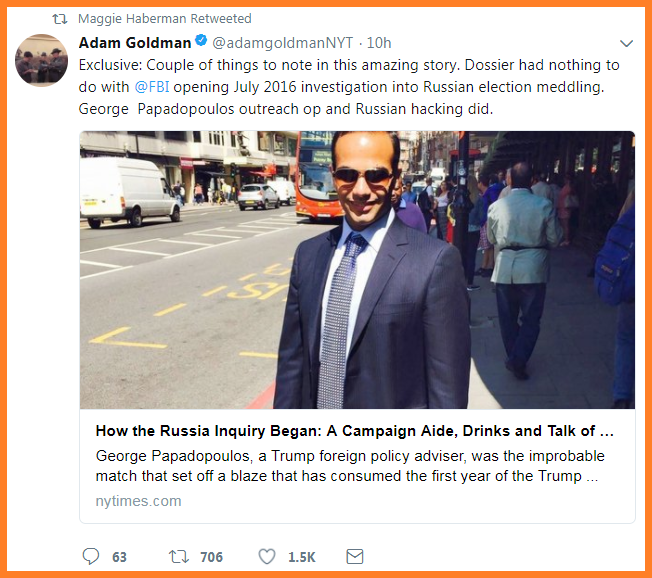 Unfortunately for the New York Times – much like CNN’s botched “Bombshell” report from a few weeks ago that Donald Trump Jr. was told about the WikiLeaks emails before their release, only to issue a major correction because Trump Jr. was told after they were made public (by a random person), this “startling revelation” ny the NYT that Papadopoulos spilled the beans about Russia having dirt on Clinton was already public information.

Cue the NYT getting split like a cord of wood by the Conservative Treehouse‘s TheLastRefuge, who dressed down the entire Papadopoulos narrative in a 21-tweet dissertation (below).

2.) Additionally, worth noting @maggieNYT is nowhere in the Joint Analysis Report [Comey, Brennan and Clapper construct] is anything about George Papadopoulos even hinted or alluded to.
3.) [@maggieNYT ] ABC in Australia is reporting it was Alexander Downer (Australian High Commissioner to UK) who then let counterparts in US know that George Papadopolous was talking about the Sidney Blumental hack via Clinton Emails.
4.) The @maggieNYT is also nonsense based on common sense. Papadopoulos was so important that:

FBI waited for six months to talk to him?

5. @maggieNYT If George Papadopoulos was so important to the FBI “investigation” why did all “intelligence” agencies released their final JAR report without ever speaking to him?
Not even once?
6. No @maggieNYT what you have in your article is a well constructed and brutally familiar pattern of what journalism looks like when the IC use reporters to cover their tracks and create a justification based on a false premise.
7. The Fusion GPS, Glenn Simpson, Mary Jacoby, Nellie Ohr etc. and subsequent Christopher Steele origin of the FISA application source material is a risk to the former leadership within the DOJ National Security Division and FBI Counterintelligence Division.
8. @maggieNYT That’s why both FBI and DOJ sides of this intelligence operation need to create a false origin. The actual FISA application content is a much more explosive risk. Use your common sense logic hat and see when you are being played.
9. @maggieNYT USE COMMON SENSE: If a Papadopolous conversation in May 2016 was the origin, the source material, of the FBI counterintelligence operation, then why were they denied a FISA application in June/July 2016 ?
10. @maggieNYT The wife of Glenn Simpson (Fusion GPS), Mary B. Jacoby, with years of Russia-angled reporting –including Donald Trump– visits the White House on April 19th 2016. white-house-logs.insidegov.com

11. @maggieNYT Mary B Jacoby is a deep part of Clinton’s political camp going all the way back to the Rose Law Firm. You know that because you know her.

After the April 19, 2016, WH visit, the DNC and Clinton campaign hire Mary and Glenn (Fusion GPS) for the “trump project”. 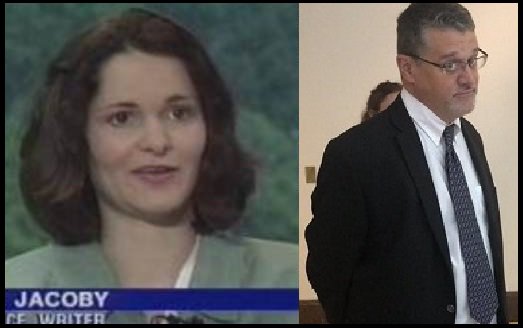 13. @maggieNYT As you know, Nellie Ohr is the wife of DOJ Deputy Bruce Ohr. The same Bruce Ohr who was demoted for meeting with Glenn Simpson and Christopher Steele, along with FBI agent Peter Strzok, w/out telling DOJ leadership.

14. @maggieNYT Again, you know this stuff. Nellie Ohr, Bruce Ohr and Glenn Simpson have known each other for years; and have worked on CIA *open source* projects together for a long time. 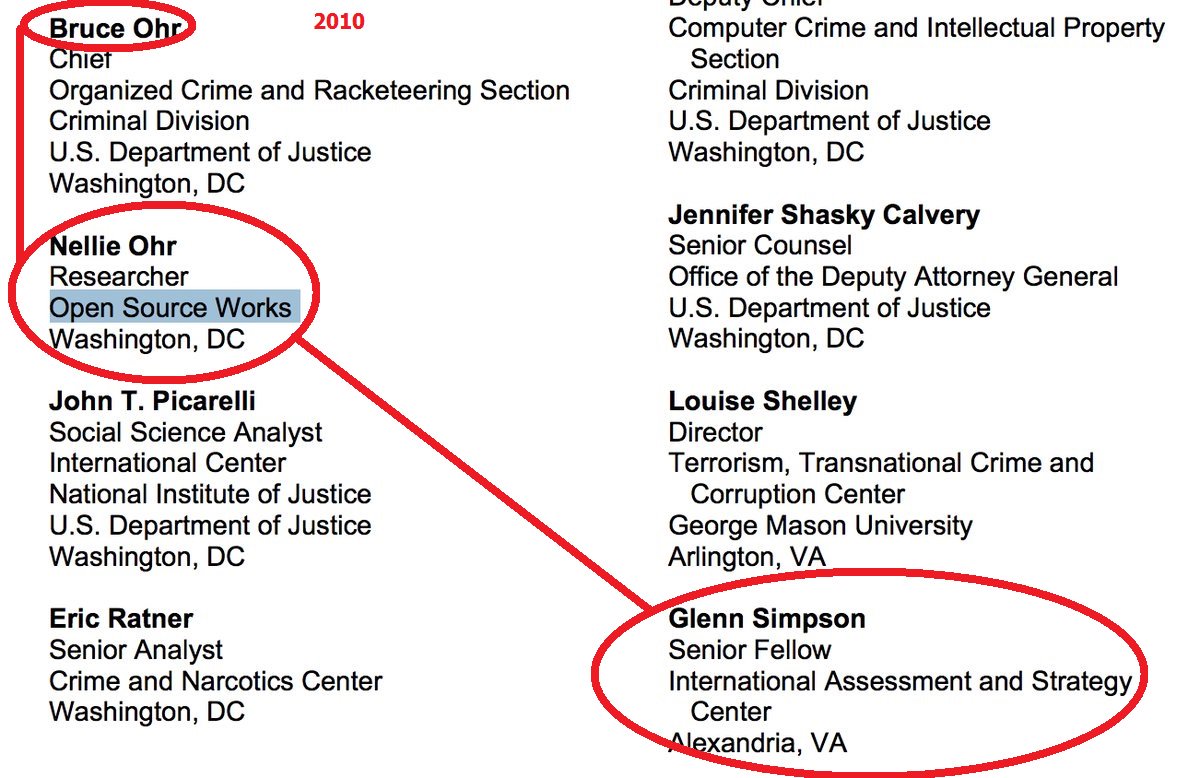 15 @maggieNYT As you know all of these people are SME’s on everything Russia and everything Russia intelligence. It is all of this activity in April and May, not innocuous George Papadopolous reading newspapers, that assembled data and eventually led to the “Russia Probe”.
16. @maggieNYT on June 24th 2017 Mary Jacoby even publicly stated on her facebook that her work with Glenn is what specifically led to the FBI beginning the “Russia Probe”.

Did President Obama Read the ‘Steele Dossier’ in the White House Last August?To date the investigation into the Fusion GPS-manufactured collusion scandal has focused largely on the firm itself, its allies in the press, as well as contacts in the Department of Justice and FBI.…http://www.tabletmag.com/jewish-news-and-politics/251897/obama-steele-dossier-russiagate
17. @maggieNYT After the initial July 2016 FISA Court denial, the FBI and DOJ team leaned heavily on the external team of Jacoby, Simpson, Ohr, Steele etc. who created the “dossier” that enhanced the application that gained the FISA warrant in Oct. 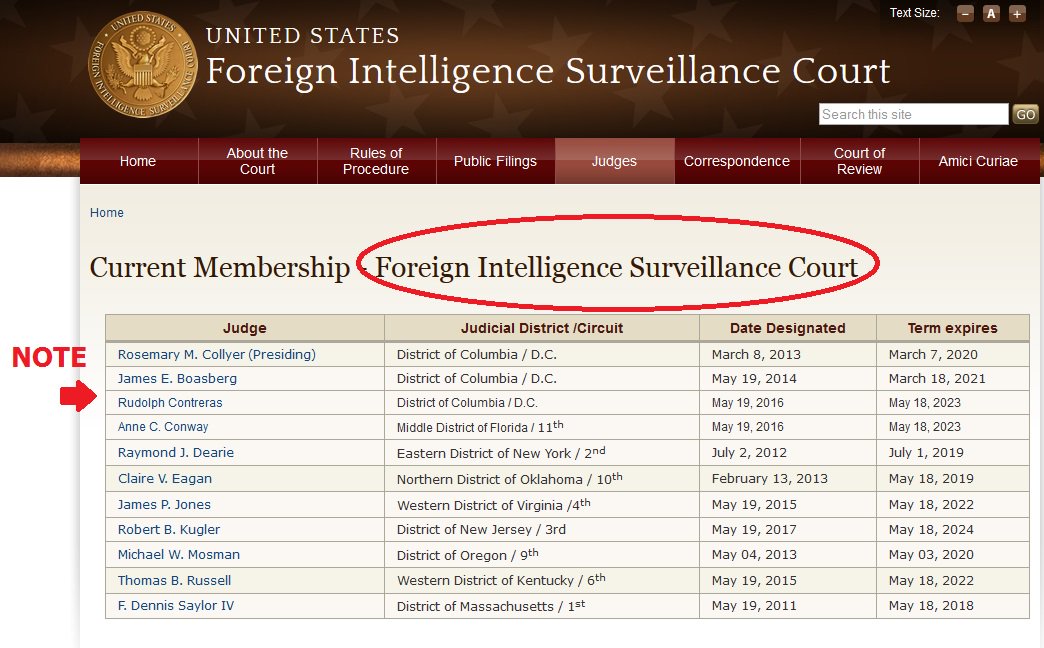 18. @maggieNYT as you know, because of the legal framework around them, FISA warrants can be applied retroactively. Wiretaping and monitoring can technically begin while evidence is gathered to justify a DOJ-NSD warrant application later. 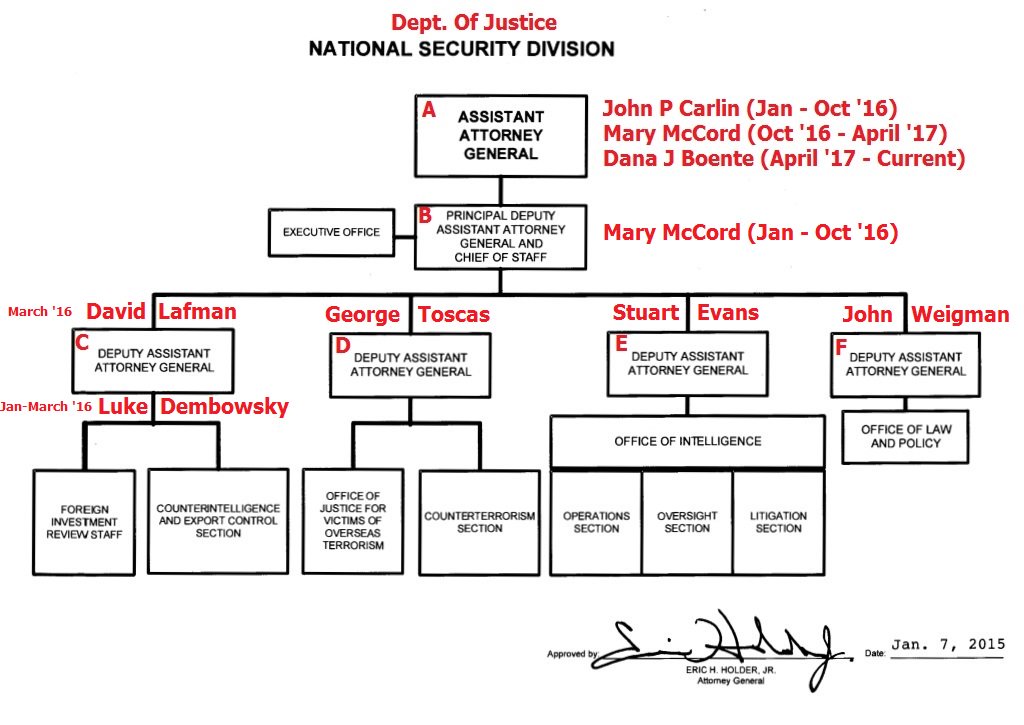 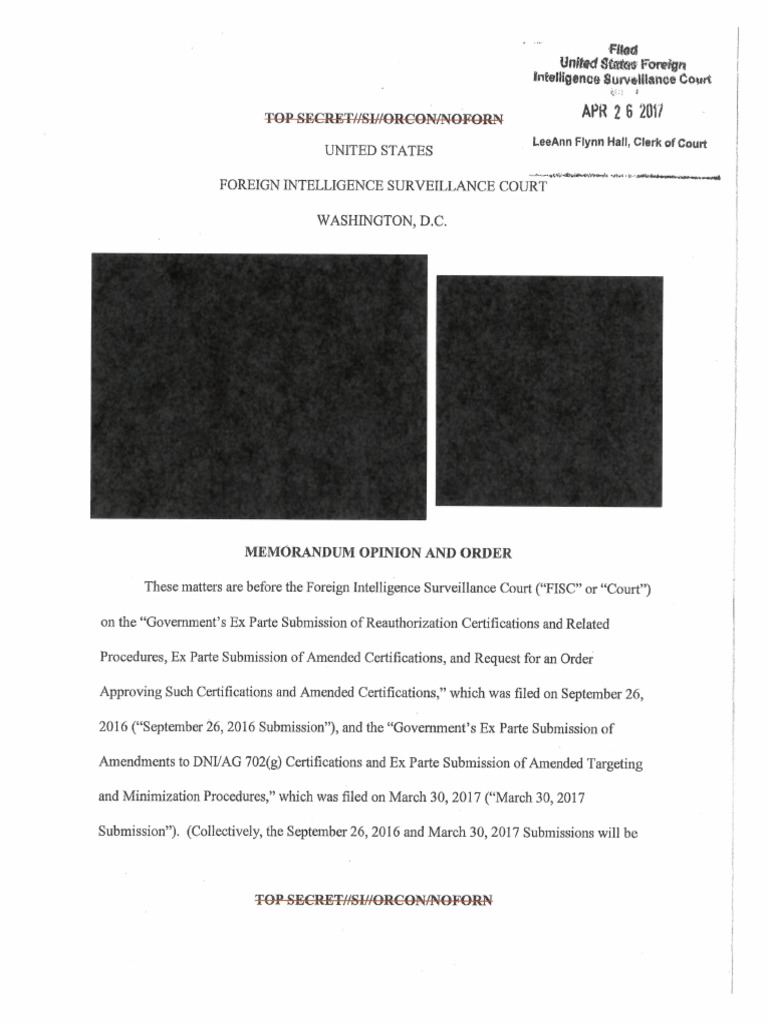 Top Secret FISA Court Order – President Obama Spying on Political EnemiesA newly released court order from the Foreign Intelligence Surveillance Court (FISA) found that the National Security Agency, under former President Obama, routinely violated American privacy protect…https://www.scribd.com/document/349542716/Top-Secret-FISA-Court-Order-President-Obama-Spying-on-Political-Enemies
20. So @maggieNYT the question I have for you is: Did you write that nonsense about George Papadopolous because the IC (FBI/DOJ) tricked you into it?….. OR were you a willing participant in helping transmit political disinformation in an effort to help them cover their tracks?

Meanwhile, as pointed out by The Gateway Pundit‘s Cristina Laila, the Washington Examiner’s Byron York further tore into the NYT report:

So: 1) If Papadopoulos actions drove FBI probe, why wait til nearly Feb 2017 to interview him? If done to keep probe quiet before election, why wait more than two months after vote? 2/4

One add: Not saying Papadopoulos played no role. But questions about whether his part was so central in starting FBI probe in July 2016.

Perhaps the most embarassing part for the New York Times isn’t that they appear to have published yet another massive case of Fake News – but that it took six of their ‘best and brightest’ to cobble it together.