Sporting an “I’m with WikiLeaks” top like the one she wore to a January Senate hearing on hacking, Fairbanks begins her plea which was Retweeted by both official WikiLeaks accounts, by reminding people that the US has never filed any formal charges against Julian Assange: 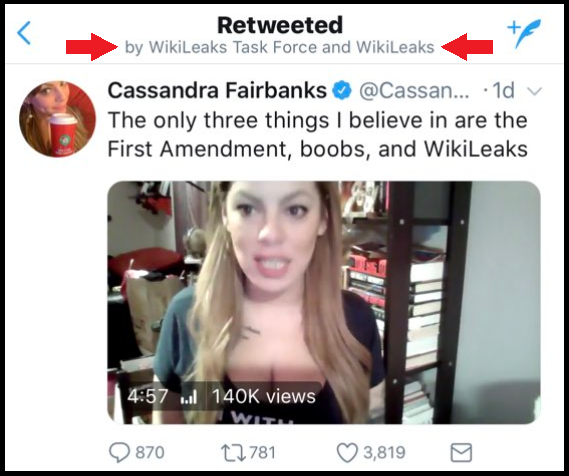 “I think that we should be pressuring Donald Trump to do more to help Julian Assange. It’s probably one of the most important things that he get out of that Embassy. The United States has never filed any formal charges against Assange.”

Trump has the ability to grant a preemptive pardon, which means that he would never have to face trial or be extradited here at all.” –Cassandra Fairbanks

Fairbanks then points out that the media thrives on leaked information, which is often false, and sometimes results in “disastrous consequences, sometimes even deadly – like the case in the Iraq War,” adding “unlike the fake news published by outlets like the NYT to sell war to the public, Assange has published true, real information that has influenced the public to want to get out of wars.”

She then notes that Assange was “once held in the absolute highest regard by the left for the publishing of the Iraq and Afghan war logs,” crippling the agenda of the “war-hungry swamp” and dealing a massive blow to the Bush administration.

We elected Trump because of his rejection of the war-monger establishment, and the fake news media. With what he represents, Trump should be giving Assange a medal and throwing him a parade instead of allowing his political persecution to continue. Assange is the bravest and most heroic man on the planet, and every day he is without freedom is a tragedy.

If Trump really wanted to stick it to the deep state, this would be how to do it.

“Wikileaks doesn’t hack or steal documents – they simply publish things they obtain or are given to them. You know, like what Buzzfeed did when they published that debunked bullsh*t f*cking potty-dossier from John McCain,” said Fairbanks.

The only three things I believe in are the First Amendment, boobs, and WikiLeaks pic.twitter.com/lPGrWaXDFh

Last week, three hooded figures dressed in black broke into the Madrid office of WikiLeaks lawyer Baltasar Garzon at dawn on Monday morning, in what police are describing as a “very professional” operation they are treating as an attempted robbery, according to Spain’s largest newspaper, El País. Garzon heads Assange’s legal defense, in particular working to avoid extradition to Sweden and preparing to face charges thought to be pending by U.S. authorities. 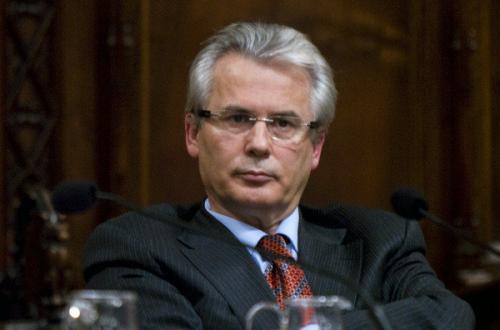 The intruders covered security cameras with tape, and there were no signs that anything was taken – however police are analyzing Garzon’s computer equipment to determine whether or not any files were taken or copied. “They have not taken what they have been looking for,” Garzon told El Periodico, and told Ser magazine that his clients’ security “has not been affected,” and that the people “acted very quickly.”

Hours after the break-in, and shortly before WikiLeaks tweeted the original article from El País, Julian Assange called a Jimmy Dore video “Brilliant” which prominently features Assange’s interview with a Dutch television host in which the WikiLeaks founder all but used sign language to indicate slain DNC Seth Rich was his source.  (Assange clip at 21:30)

Shortly after, the Navy deleted the tweet, explaining that “an inadvertent keystroke by an authorized user of the U.S. Navy Office of Information’s Digital Media Engagement Team caused the trending term “Julian Assange” to be tweeted from the Navy’s official Twitter account” and in a follow up tweet added that “the inadvertent tweet was briefly posted for a few second before it was quickly deleted by the same authorized user. The inadvertent tweet was sent during routine monitoring of trending topics.”

Adding to the mystery, in an official statement, WikiLeaks noted that apart from increased surveillance at the Ecuadorian embassy, the 46-year-old Australian was fine. “Despite some oddities from the US Navy and Twitter today and increased physical surveillance @JulianAssange’s physical situation at the embassy remains unaltered–confined without charge in violation of two UN rulings requiring the UK to set him free,” the statement read.

Between the break-in at their lawyer’s office, the strange Twitter account incident and the weird tweet from the Navy – perhaps Cassandra Fairbanks is WikiLeaks’ last hope.

If you enjoy the content at iBankCoin, please follow us on Twitter
2017-12-30
zeropointnow
Share
Previous Goldman Showers Execs With Nearly $100 Million In December To Avoid Trump Tax Hit
Next Report: Australian Banks Freezing Accounts Of Bitcoin Investors Amid Global Regulations