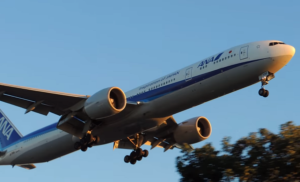 An All Nippon Airways flight en route from Los Angeles to Tokyo was forced to turn around four hours into the eleven hour journey to remove an “unauthorized person” from the flight, angering passengers who were told by the airline that passenger had a ticket for another airline.

A twitter user claiming to have been on board flight ANA 175 said that four people were questioned and detained; “1 Muslim,2 white, and 1 asian lady.”

Police said the massive U-turn was due to a “mix up, and was straightened out,” according to ABC7, and that the flight has been rescheduled to depart Wednesday morning.

Model Christine Teigen was aboard and documented the incident over Twitter.

a flying first for me: 4 hours into an 11 hour flight and we are turning around because we have a passenger who isn’t supposed to be on this plane. Why…why do we all gotta go back, I do not know

.@chrissyteigen is on an international flight that turned around 4 hours in because a passenger isn’t supposed to be on plane. Look at this flight path! This is my Twilight Zone. pic.twitter.com/II06VmfOah

Police were interviewing people seated near the mystery passenger, according to Teigen.

Police were interviewing all the people seated around the mystery person once we got off the plane. Why would they do this! I MUST KNOW MORE

There is a 20 minute interview before we can get off the plane!! This is my dream. Police! Talk to me talk to me

ok I’m officially ready to say something is up

One twitter user said that four passengers were detained:

Im on the flight. 4 people were detained

There were 4 people questioned. 1 Muslim,2 white, and 1 asian lady

3 male and 1 female and they didnt get handcuffed

Person removed from plane that turned around halfway to Tokoyo and returned to LAX must have been a big fish! All the passengers had to sign a NDA!

My first tweet can’t be more epic than this: just survived an 8-hour LAX-LAX flight with @chrissyteigen and @johnlegend on #ANA #NH175 pic.twitter.com/yY0vIqfcja

The recorded flight time was recorded at seven hours and 56 minutes.
Originally published by ZeroHedge
If you enjoy the content at iBankCoin, please follow us on Twitter
2017-12-27
zeropointnow
Share
Previous Facebook Dumps ‘Fake News’ Patrol After Spectacular Backfire
Next Bikini-Clad Tiffany And Ivanka Trump Wish You A Merry Christmas!