GOP Cmte Member: Mueller Needs To “Put Up Or Shut Up,” While Sessions Needs To Stop Being A Spectator 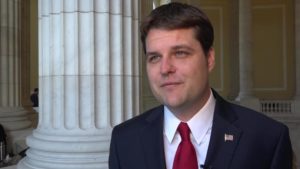 Rep. Matt Gaetz (R-FL) went on Fox News Wednesday night to discuss the Russia investigation, where he advocated for public Congressional testimony of key witnesses, and called current Deputy FBI Director Andrew McCabe “a key witness to a potential scheme to deprive President Trump of his ascension to the office he was elected to serve in.”

Gaetz also said it’s time for Special Counsel Robert Mueller to “Put up or shut up,” adding “If there’s evidence of collusion, let’s see it. If not, let’s move on as a country and let’s institute reforms at the FBI so that an ego-maniac FBI director like James Comey cannot depart from the normal standard procedures that guarantee all Americans equal treatment under the law.

Apparently House Judiciary Chairman Bob Goodlatte has also made a commitment to members of the committee that subpoenas are about to go out for Peter Strzok, his mistress Lisa Page, Bruce and Nellie Ohr, and Andrew McCabe.

On the topic of Attorney General Jeff Sessions, Gaetz said “we need the Attorney General to step up and do his job,” adding “we need to move on and get past this, but that will only happen if Attorney General Sessions stops being a spectator and actually steps up and leads the Department of Justice, and shuts down this biased investigation.”

If you enjoy the content at iBankCoin, please follow us on Twitter
2017-12-21
zeropointnow
Share
Previous Mexican Man Officially Granted Disabled Status For Having Giant Penis
Next Sessions Comes To Life! DOJ Prosecutors Sent To FBI With Questions About Uranium One