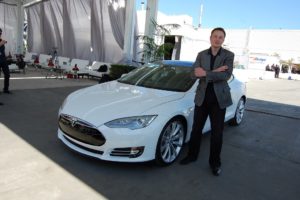 JP Morgan has called for investors to short electric-car maker Tesla over concerns that the company is going to need to dillute its stock by raising more capital, and that competition from other automakers will take a big bite out of Elon Musk’s pie, says analyst Ryan Brinkman.

Brinkman is calling for a 40% decline in $TSLA shares, with a $185 price target.

“Tesla will face several milestones in 2018 relative to the ramping of production of the Model 3, which we believe will be difficult for the company to meet, particularly if its substantial miss to volume targets in 2017 are to be any guide,” wrote Brinkman on Friday.

“Competition for electric vehicles will increase in 2018 even as the regulatory environment in the United States may become less of a tailwind, including possible tax law changes and exhaustion of the $7,500 US federal tax credit available to buyers,” he wrote.

Tesla has been under pressure from short sellers for a while, with some pointing to Tesla’s struggle to bring its mid-priced Model 3 to full production after falling far short of expectations, while others have pointed towards the auto industry’s steady shift toward and electric and autonomous future.

“One of our principal concerns relates to how Tesla is going to be able to earn even an industry average EBIT margin if it must compete against competitors that are pricing electric vehicles without even the intention to make money, but rather to subsidize the rest of their lucrative internal combustion engine portfolios from a legal and regulatory compliance perspective,” added Brinkman.

Apparently German government officials have finally woken up to the realization that it’s utterly ridiculous to use tax revenue generated primarily from middle and low-income households to fund subsidy payments to rich people buying $100,000 luxury sports cars. As Business Standard notes this morning, the German Federal Office for Economic Affairs and Export Controls announced that it will no longer subsidize the Tesla Model S as it can not be delivered in a configuration that meets the 60,000 euro price limit.

A German government agency has removed Tesla’s Model S from the list of electric cars eligible for subsidies because it is not available in a version that falls within a 60,000 euro ($71,448) price limit.

Tesla customers could not order the Model S without extra features that pushed the price of the car above the limit, a spokesman for the German Federal Office for Economic Affairs and Export Controls (BAFA) said on Friday.

German magazine Auto Bild had reported that BAFA was looking into the issue and could take Tesla off the eligibility list.

A price cap was included to exempt premium models, which Tesla has claimed doesn’t apply to the Model S.

Tesla has replied with a vigorous defense:

“This is a completely false accusation. Anyone in Germany can order a Tesla Model S base version without the comfort package, and we have delivered such cars to customers,” Tesla said in a statement.

”If a sales person told a customer they could not buy the Model S base version without the comfort package, this is not accurate and clearly outside our policies and procedures and we will investigate and take appropriate action as necessary.”

As ZeroHedge also notes – On the bright side, Tesla’s new Model 3 should meet German subsidy price caps…if only they could figure out how to weld them together…

If you enjoy the content at iBankCoin, please follow us on Twitter
2017-12-01
zeropointnow
Share
Previous John Podesta Bites Head Off Feminist Over Pizzagate Question At Duke University [VIDEO]
Next S&P 500 Bounces Back As Market Digests Case Against Flynn