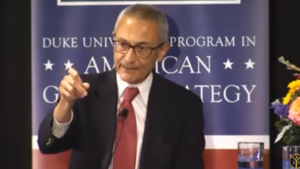 Former Clinton campaign manager John Podesta jumped down the throat of feminist and Political Science major Nicole Kiprilov in front of 300 people at Duke University Wednesday, after the undergrad asked Podesta questions about how he responds to various controversies including ‘Pizzagate,’ Uranium One, The Podesta Group, and Joule Unlimited – a now-defunct Boston green energy company Podesta sat on the board of along with to two Russian officials, which received $35 million from the Kremlin while Hillary Clinton was Secretary of State.

Via the Duke Chronicle:

“when junior Nicole Kiprilov asked him how he was dealing with accusations of being involved with the now-debunked “Pizzagate” scandal, that he owned 75,000 “undisclosed” shares of stock from a company with Russian Kremlin ties and Uranium One being a client of the Podesta Group—among other allegations—he didn’t hold back.

“This is how the alt-right does fake news,” Podesta said. “It’s personally painful because a lot of this is really total bullsh*t. My family and I have been put through this Pizzagate bullsh*t now for a year—which has totally been debunked, by the way.“

Kiprilov didn’t have a chance to ask a followup question such as what playing dominoes on cheese vs. pasta means, before the 68 year-old Podesta launched into a defense of his involvement with failed green energy company Joule Unlimited – which he owned 75,000 shares he transferred to his daughter via a shell corporation before joining Hillary Clinton’s campaign.

“My relationship with the company that you talked about, that was based in Boston, an American innovative company—I totally disclosed, and Fox has had to correct that twice” –John Podesta

Yes – it’s an American company, which received $35 million from the Kremlin and had two high ranking Russians on its board of directors aside from Podesta; senior Russian official Anatoly Chubais and oligarch Reuben Vardanyan – a Putin appointee to the Russian economic modernization council.

In response to the next question from an audience member about how John feels about his brother Tony Podesta of the Podesta Group being under FBI investigation, John Podesta made sure to distance himself from Tony as he stammered through his response:

“Look I think my brother, uh, uh, A) I’m not my brother. Does it worry me? You know, I, I, It’s, it’s painful. I mean his firm, uh, uh, after many years in business, uh, uh, un-unraveled as a result of, I think of the fact that it was under investigation,” adding that he thinks Tony’s involvement with Manafort’s partner Rick Gates and Congressman Vin Weber (R-MN) was ill advised.

Kiprilov – a Political Science junior and UN intern who has studied at Stanford, Oxford, and is the president of Duke University’s ‘premier feminist magazine,’ Phoenix – was disappointed in Podesta’s responses, telling the Duke Chronicle

“Pizzagate was a conspiracy theory, but the other allegations, I don’t know,” Kiprilov said. “If he had been a bit calmer and more mature in answering the questions, I would have been satisfied. I was disappointed that he got so angered and triggered by my question.”

A self-identified Republican who says she is not part of the alt-right, Kiprilov said she felt that Podesta misunderstood the nature of her question.

“I did not imply that I believed any of this,” she said. “I think he immediately assumed I did, so he lumped me with the alt-right crowd, which was very unfortunate that he jumped to that conclusion.”

Kiprilov caught up with Podesta after the event to let him know she’s not a member of the alt-right.

Before the night was over, Podesta answered questions about Russia’s effect of the election, stating that while he didn’t think Russia’s efforts to interfere with voting on election day succeeded, bots and Facebook ads spreading fake news did.

“I do think that had an effect,” Podesta said, adding “It eats away at you underneath. You don’t fully sense it because it’s not bubbling up to the mainstream.”