Update: Bitcoin and Ethereum are holding at the lows of the day, but following ECB comments earlier (see below), The Fed’s vice chariman of supervision, Randy Quarles, warns that digital currencies like bitcoin pose “serious financial stability issues” as they grow…

Today, the vast majority of our payments by volume and value are processed by regulated financial institutions. In the U.S. payment system, digital currencies are a niche product that sometimes garners large headlines.

While these digital currencies may not pose major concerns at their current levels of use, more serious financial stability issues may result if they achieve wide-scale usage.

Perhaps most ironic is Quarles’ description of the ‘drawbacks’ of cryptocurrencies…

But from the standpoint of analysis, the “currency” or asset at the center of some of these systems is not backed by other secure assets, has no intrinsic value, is not the liability of a regulated banking institution, and in leading cases, is not the liability of any institution at all. Indeed, how to treat and define this new asset is complicated.

So because it’s not backed by ‘other secure assets’ – analysing its value is complicated… like the dollar.

It’s a bloodbath in cryptocurrency markets this morning…

Having bounced overnight to over $10,600, Bitcoin prices are tumbling once again as we approach the US equity market open… 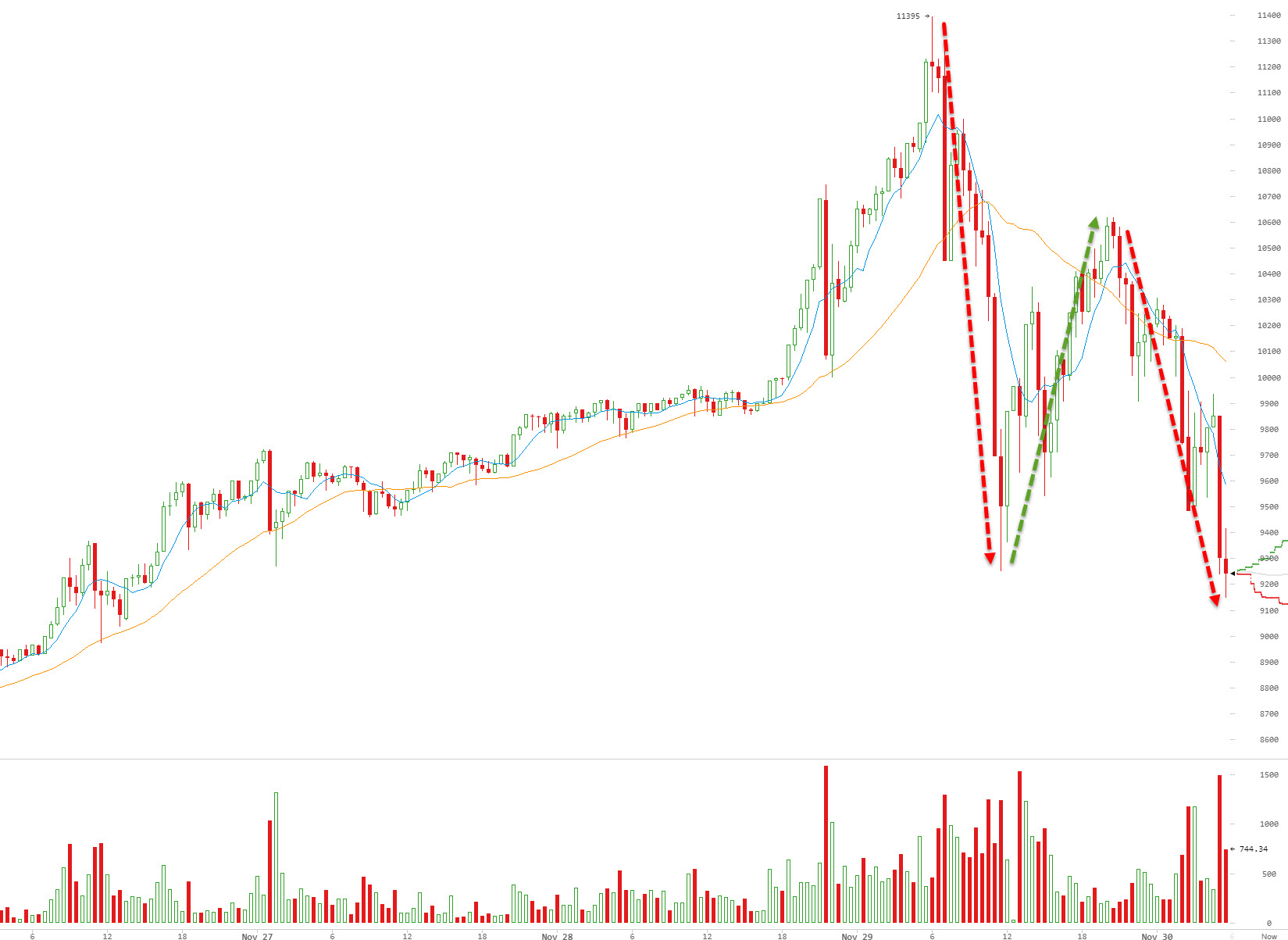 While there is no immediate catalyst, CoinDesk notes that ECB Vice President Vitor Constancio  – ever eager to talk citizens away from decentralized ‘anything’ – warned about the risks of investing in bitcoin at current valuations.

Speaking to CNBC, Vitor Constancio said developments in bitcoin’s price make it “a speculative asset by definition,” continuing: “Investors are taking that risk of buying at such high prices.”

Even so, Constancio told CNBC that the ECB is not in a position to regulate the cryptocurrency, saying, “We don’t have responsibility or even instruments that point to particular prices of particular assets, that is certainly not the role of central banks.”

His comments echo those of ECB president Mario Draghi, who in September indicated that the central bank does not have the authority to regulate cryptocurrencies.

“It would actually not be in our powers to prohibit and regulate” bitcoin and other digital currencies, he said at the time.

However, on the more optimistic side, CoinTelegraph reports that Ronnie Moas has upped his End 2017 target for Bitcoin to $20,000.

Moas looks at Bitcoin as a whole, incorporating all the chain splits in his split-adjusted price is and considering the price of the forked Bitcoin chains alongside the original was $12,740 when Moas made his new prediction, $14,000 looked undervalued again.

Moas now puts the line in the sand at $20,000 for the split-adjusted price when the new year hits. Looking at how things have gone so far for Moas, a month is a long time, and perhaps $20,000 will be broken before that time.

Many pickers, investors and money movers have thrown their hats into the ring trying to hit the sweet spot of this volatile asset when it comes to prediction.

Tom Lee, rather conservatively, set a Bitcoin growth of 40 percent to happen by the middle of 2018. His prediction put him at $11,500. That prediction was made a week ago, and in that time Bitcoin topped at around $11,300.

Max Keiser has a much more bullish view, but over a longer time frame as the host of Russia Today’s Keiser Report believes that $100,000 Bitcoin is an eventuality.

Moas, as one of the most well-regarded stock pickers, is clearly in the Bitcoin game for its investment potential rather than the technology side which has seen different factions at war with each other. Some people are vehemently Bitcoin Cash supporters, and others true fans of the original chain.

Moas, however, with his investor’s hat on, sees that by buying Bitcoin he not only received free Bitcoin Cash, but also free Bitcoin Gold, and thus counts them together in his portfolio, urging others to d the same as a diversification strategy.

Bitcoin Diamond and the real gold

Bitcoin Diamond is another fork of the Bitcoin chain that went largely unnoticed. Its aim is to switch from proof-of-work to proof-of-stake after mining is completed – after just 10,000 blocks.

“Bitcoin is now up split-adjusted by 394 percent since my July 3 recommendation,” Moas went on.