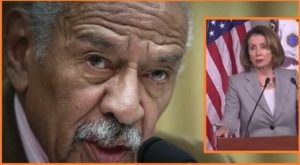 One day after word that Michigan Rep. John Conyers wouldn’t seek re-election next year after over 50 years in the House, the 88 year old accused of sexual harassment by multiple women was reportedly hospitalized after returning to the Detroit area.

“I just spoke with Monica Conyers on the phone and we want you to know that the congressman is resting comfortably in an area hospital. He’s doing OK, as well as he can be expected for a gentleman that’s approaching 90 years of age,” Riddle said. “The congressman’s health is not what it should be and lot of that is directly attributable to this media assault.”

One of Conyers’ acusers, Marion Brown, spoke early Thursday – describing the Senator’s conduct while she worked for him:

“Some of the things that he did, it was sexual harassment,” she said. “Violating my body, propositioning me, inviting me to hotels with the guise of discussing business, and then propositioning for sex. He just violated my body. He has touched me in different ways, and it was very uncomfortable and very unprofessional.”

Brown recounted a 2005 incident in a Chicago hotel room, in which she claims Conyers “invited me into the hotel and he has undressed, you know, down to his underwear. And again, it was the proposition of sexually satisfying him.”

“He pointed to areas, genital areas of his body, and asked me to touch it,” said Brown

Conyers settled a sexual harassment claim with Brown back in 2015.

Buzzfeed reported last week that Conyers had used taxpayer money to pay settlements to several former staffers who accused him of sexual harassment.

Wait till you see my dick!

Deanna Maher, 77, who ran a Michigan office for Conyers from 1997 to 2005, came forward and told The Associated Press Tuesday that the first incident occurred in 1997 during a three-day Congressional Black Caucus event in Washington, which she said she “felt honored” to attend.

Maher said while she was in the bedroom of a hotel suite, Conyers walked in, called room service and ordered sandwiches.

“I had my nightclothes on,” said Maher, who now lives in the Holland area in western Michigan. “I was just scared to death. I was married at the time. He sat in the bedroom taking his clothes off. I didn’t say anything and he didn’t say anything.”

Pelosi Throws Conyers Under The Bus

Weeks after praising Conyers as an “icon” who fought for civil rights and women’s rights, House Democratic leader Nancy Pelosi says Conyers should step down over “serious,” “disappointing” and “very credible” allegations.

That’s nice Nancy, but NBC News reports that Conyers’ attorney has defiantly rejected Pelosi’s calls for his client to resign and insisted no such decision would be coming any time soon.

“It is not up to Nancy Pelosi, Nancy Pelosi did not elect Mr. Conyers,” the attorney, Arnold Reed, said at a press conference Thursday in Detroit. “And she sure as hell won’t be the one to tell the congressman to leave.”

Meanwhile, the highest-ranking African-American Democrat in Congress, Rep. Jim Clyburn of South Carolina, and House Democratic Whip Steny Hoyer, of Maryland, both said later Thursday that they felt Conyers should step down. –NBC

Let’s see if he does…