An Obama appointed government watchdog central to the Hillary Clinton email investigation says that he, his family and his office faced an ‘intense backlash‘ from Clinton allies, who threatned him over findings that Clinton mishandled classified information.

Former Inspector General Charles McCullough III told Fox News Chief Intel correspondent Catherine Herridge that he faced intense pressure from senior officials on the left – with one Clinton campaign official threatening that he and another  government investigator would be immediately fired under a Hillary Clinton presidency:

“It was told in no uncertain terms, by a source directly from the campaign, that we would be the first two to be fired — with [Clinton’s] administration. That that was definitely going to happen.” –Charles McCullough III

As a refresher, over 2,100 classified emails were sent over Clinton’s personal server, which was used exclusively for government business. Despite this, former FBI Director James Comey – who had drafted Clinton’s exoneration letter months before reviewing evidence in the case – recommended that the DOJ not prosecute the case.

McCullough was recommended to Obama by then-Director of National Intelligence, James Clapper, who told McCullough that Clinton’s conduct was “extremely reckless,” adding “the campaign … will have heartburn about that.”

He [McCullough] said Clapper’s Clinton email comments came during an in-person meeting about a year before the presidential election – in late December 2015 or early 2016. “[Clapper] was as off-put as the rest of us were.”

After the Clapper meeting, McCullough said his team was marginalized. “I was told by senior officials to keep [Clapper] out of it,” he said, while acknowledging he tried to keep his boss in the loop.

In January 2016, McCullough told Republicans on the Senate Intelligence and foreign affairs committes that emails above the “Top Secret” classification had been passed through the former secretary of state’s private, unsecure server – such as an email about Benghazi she sent to daughter Chelsea Clinton (using psuedonym Diane Reynolds) on the night of September 11th, 2012 from ‘@clintonemail.com’ which not only divulged highly classified military intel over a non-government server vulnerable to foreign surveillence – it also revealed that the Obama administration knew that an “Al Queda-like group” was responsible for the attack.

One wonders what Chelsea’s security clearance was at the time?

Instead of informing the American public that radical Islam was responsible for the attack, the Obama administration fabricated a story – peddling the lie that anger over an anti-Islamic YouTube video resulted in the attack, which led to the arrest and imprisonment of an innocent man.

Hillary knew it was an "Al Qeda-like group" hours after it happened when she told Chelsea ("Diane Reynolds") top secret information. pic.twitter.com/LiOJj3jck1 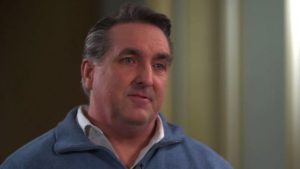 As one of a handful of people who reviewed the 22 Top Secret Clinton emails deemed too classified to ever see the light of day, McCullough says “There was a very good reason to withhold those emails … there would have been harm to national security,” adding “sources and methods, lives and operations” could be put at risk. According to Fox, some of those email exchanges were considered Special Access Privelage (SAP), or “above top secret.”

What’s interesting about that, is an anonymous 4chan poster “FBI Anon,” whose breadcrumbs of information have been largely correct, posted on July 2, 2016 that Clinton had “SAP level programs on her server, which if made public, would literally cause an uprising and possibly foreign declarations of war.” 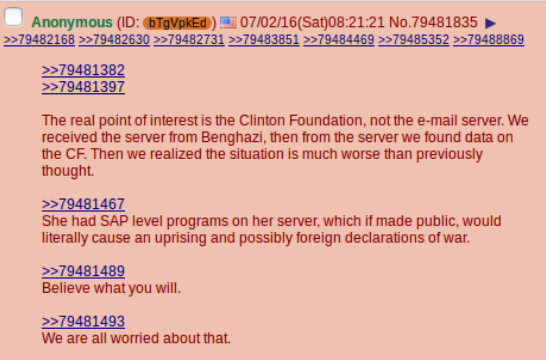 Then, on October 16, 2016 – three weeks before former FBI Director Comey cleared Clintin, “FBI Anon” elaborated on SAP programs and made an unverified claim about Clinton:

A Special Access Program is an intelligence program classified above top-secret. They are held on closed servers at secret locations. The only way to get one is if you are specifically read on to a program, have a need to know, then you must physically go to a location and pass through several layers of security to even look at the program. A good example in non-classified terms would be the locations and operations of our intelligence operatives around the glove, or our missile silo locations. SAP is granted on a need to know basis, and Hillary did not have any need to know any of the programs on her server. All I can tell you about the SAPs is that Hillary had them, and she did not have proper authority to have any of them. They were leaked to her by someone, and she did sell them to overseas donors. Possessing them alone makes her guilty of treason.” –FBI Anon

In response to McCullough’s findings, Democrats turned their backs on the Obama-appointed Inspector General for doing his job.

“All of a sudden I became a shill of the right,” McCullough said, adding “And I was told by members of Congress, ‘Be careful. You’re losing your credibility. You need to be careful. There are people out to get you.’”

McCullough told Fox of “an effort… certainly on the part of the campaign to mislead people into thinking that there was nothing to see here.”

As the Clinton campaign geared up for the 2016 election, WikiLeaks documents reveal that Hillary’s inner circle was already starting to spin the investigation – writing in an August 2015 email that “Clinton only used her account for unclassified email. When information is reviewed for public release, it is common for information previously unclassified to be upgraded to classified.”

McCullough was critical of this response, telling Fox “There was an effort … certainly on the part of the campaign to mislead people into thinking that there was nothing to see here.”

In response to the Inspector General’s pushback, seven senior Democrats sent a letter to McCullough and his counterpart at the State Department, raising concerns over the impartiality of the Clinton email investigation. McCullough, however, was not arriving at any conclusions himself – he was simply passing along the findings of individual government agencies on appropriate classifications assigned to the emails.

McCullough described one confrontation with Democratic Sen. Dianne Feinstein’s office just six weeks before the election, amid pressure to respond to the letter – which Feinstein had co-signed.

“I thought that any response to that letter would just hyper-politicize the situation,” McCullough said. “I recall even offering to resign, to the staff director. I said, ‘Tell [Feinstein] I’ll resign tonight. I’d be happy to go. I’m not going to respond to that letter. It’s just that simple.”

As Election Day approached, McCullough said the threats went further, singling out him and another senior government investigator on the email case.

Inquiries sent by Fox to both Feinstein and Clapper were not returned at the time of publication.

Herridge: "Was there an effort to deliberately mislead the public about [@HillaryClinton] classified emails?"
McCullough: "Absolutely." pic.twitter.com/UOwC5BoJ41

If you enjoy the content at iBankCoin, please follow us on Twitter
2017-11-28
zeropointnow
Share
Previous HAIRY SITUATION: Rep Al Green (D-TX) Had Sex With Drugged Out Staffer Before SUING Her For Blackmail
Next Saudi Crown Prince Uniting 40 Muslim Countries To ‘Wipe Terrorists From Earth’