Fox News viewers are demanding the network fire resident liberal Shep Smith after the host embarrassed himself in a wildly inaccurate and poorly researched “fact check” of the Uranium One scandal on Tuesday, following reports that Attorney General Jeff Sessions was exploring a special counsel to investigate the sale of Canadian firm Uranium One to Kremlin-owned Russian energy giant Rosatom.

Did anyone watch Shep Smith , just explain how Hillary Clinton had nothing to do with Uranium deal?? What a joke Fox News!!! Send him to CNN

The nuclear deal, which ultimately resulted in the transfer of 20 percent of American Uranium to Russia so they could sell it back to US nuclear plants at an enormous profit, was approved by the Obama administration after significant donations in excess of $140 million were made to the Clinton Foundation by Uranium One affiliates.

Unlike Sean Hannity – Ol’ Shep clearly hadn’t done his homework – consistently mispronouncing the names of people involved in the case, telling viewers that Canada-based Uranium One is a South African company, and spewing inaccurate and misleading facts regarding the CFIUS (Committee on Foreign Investment in the United States) which approved the deal.

While Smith claimed that the majority of donations to the Clinton Foundation were from Frank Giustra – a mining financier who sold his stake in Uranium One before it was acquired by Russia, and before Clinton was Secretary of State – he fails to mention the history between Giustra and the Clintons.

As Breitbart reports:  “it is Smith who is being inaccurate. As noted in Clinton Cash and the New York Times, the Clintons helped Giustra acquire Kazakh uranium assets in 2005. Mukhtar Dzhakishev, then head of the Kazakh state nuclear agency, who met with the Clintons in Chappaqua, declared in 2010 that Hillary Clinton extorted and pressured Kazakh officials to grant those uranium concessions to Giustra. Shortly after they granted those concessions, $30 million was dropped into Clinton Foundation coffers by Giustra. Smith never mentions any of this.”

Smith also misled viewers over the fact that while while nine agencies which comprise the CFIUS, the decision to approve the Uranium One deal was ultimately Obama’s. This is incorrect, as any one of the nine agencies involved had the power to veto the deal.

Another key fact omitted by Smith was the timing of funds flowing to the Clintons – including the $500,000 speaking fee Bill Clinton was paid by a Russian bank which issued a “buy” rating to Uranium One during the CFIUS review process.

Notably, Bill Clinton was at Vladimir Putin’s HOUSE the same day he gave the speech. Maybe he was checking out Vlad’s Russian tie collection?

Smith, in his crappy debunking, declared that “no uranium from Uranium One’s US mines has left the country.”

Reports from both the New York Times and The Hill reveal that yes – uranium left the US on multiple occasions. In fact, the Obama administration approved its export through a Uranium trucking firm based in Canada.

An October 17 article in The Hill reveals that Obama’s FBI, headed by Robert Mueller, discovered that “Russian nuclear officials had routed millions of dollars to the U.S. designed to benefit former President Bill Clinton’s charitable foundation during the time Secretary of State Hillary Clinton served on a government body that provided a favorable decision to Moscow”

No mention by Smith, of course.

The Hill also reported that an FBI mole embedded in the Russian nuclear industry gathered extensive evidence that Moscow had compromised an American uranium trucking firm in violation of the Foreign Corrupt Practices Act – a scheme of bribes and kickbacks to the company which would ostensibly transport the U.S. uranium sold in the ’20 percent’ deal.

Smith also leaves out a new report that the FBI scrambled to issue records-retention requests to all 9 member agencies of the CFIUS weeks after they cracked into Hillary Clinton’s email investigation.

No mention of the Podesta Group

Shep also fails to mention that the Podesta Group received $180,000 to lobby for Uranium One during the same period that the Clinton Foundation was receiving millions from U1 interests, and after Russia took majority ownership in the “20 percent” deal (source – you have to add up the years). 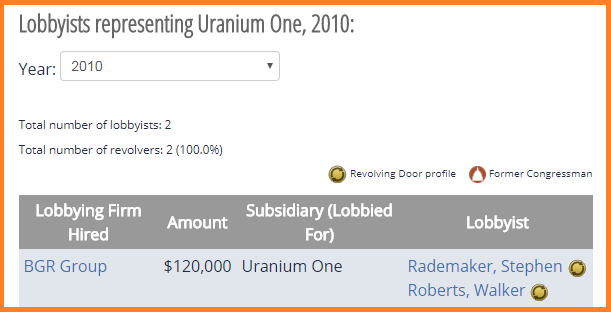 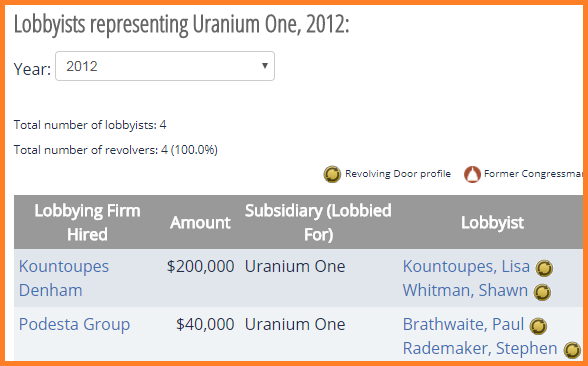 Between 2008 – 2010, parties involved with Uranium One donated $145 Million to the Clinton Foundation. You can read more about the parties here.

June 29th, 2010, Bill Clinton meets with Vladimir Putin at his home in Russia. Later that day Clinton earns $500,000 for a speech in Moscow to Kremlin-linked investment bank Renaissance Capital, which assigned a “buy” rating to Uranium One stock.

January 2013,  Rosatom State Nuclear Agency acquires the remainder of Uranium one and takes it private.

Sitting down with Mother Jones, Hillary Clinton called any investigation into the Uranium One deal “an abuse of power” – of course.