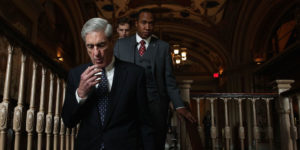 Special counsel Robert Mueller’s team issued a subpoena to President Trump’s campaign in mid-October for communications related to Russia, according to a Thursday report in the Wall St. Journal.

The probe seeks documents and emails containing keywords related to Russia from over a dozen top campaign officials, according to an anonymous source familiar with the matter.

While the subpoena does not require testimony before Mueller’s grand jury, the Trump campaign was said to have been surprised by the order – as they had been voluntarily turning over documents to Mueller’s team in September in “total cooperation” with the probe.

The subpoena will mark the first instance of Trump’s campaign being formally ordered by Mueller’s team to turn over information related to the investigation, notwithstanding . Mueller had previously subpoenaed former – and very short lived – Trump campaign manager Paul Manafort and several of his associates, seeking banking and other financial records.

In late October, shortly after the Trump campaign had been subpoenaed, Manafort was indicted on multiple counts – including money laundering related to his work for a pro-Russia political party in Ukraine. Manafort was and Tony Podesta of the Podesta Group allegedly were using a shell entity in the name of the political party to peddle Russian influence throughout Washington D.C., according to a former Podesta Group executive.

Why subpoena the Trump team if they’ve been cooperative?

Perhaps Mueller’s team thought members of the Trump campaign were withholding information. They obviously weren’t satisfied with what they had been provided prior to the subpoena.

Is Mueller’s investigation grasping at straws, or do they know the Trump team is withholding specific information? Only time will tell.

If you enjoy the content at iBankCoin, please follow us on Twitter
2017-11-16
zeropointnow
Share
Previous Shep Smith’s Humiliating Uranium One ‘Debunking’ Draws Harsh Rebuke From Angry Viewers
Next FBI Informant Has Video Of Russian Agents With Briefcases Of Bribe Money In Clinton-Uranium Scandal