Originally published on Medium by Caitlin Johnston (@Caitoz). This must-read rebuke of The Atlantic republished with permission. 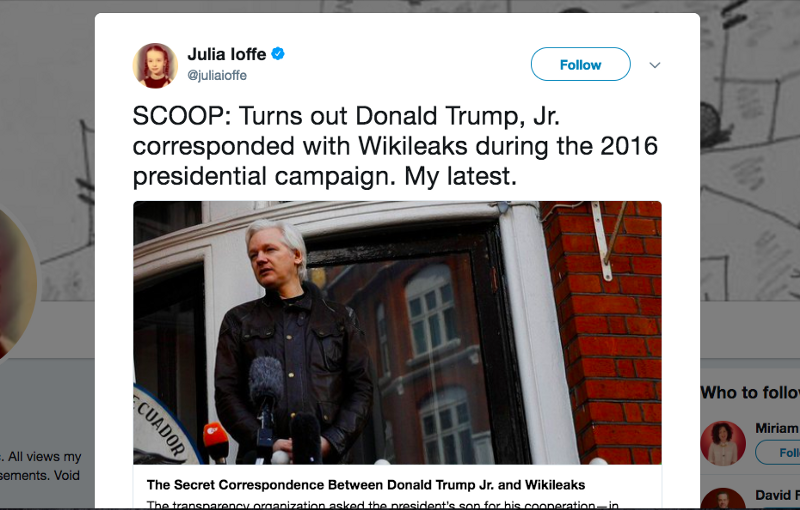 Everyone was buzzing about the shocking, bombshell new report by The Atlantic yesterday, which revealed that Donald Trump Jr. and the WikiLeaks Twitter account had engaged in a “largely one-sided” conversation in private messages over the course of several months.

Don Jr. actually comes off looking fairly normal in the report, while WikiLeaks comes off looking weird and sleazy in a way that will likely damage its reputation even further than the mainstream media campaign to smear the outlet already has. WikiLeaks is seen asking for favors Trump never fulfilled, making recommendations Trump Jr. didn’t act upon, and asking for leaks Trump Jr. never gave them, which when you step back and think about it are actually fairly normal things for a leak outlet to do, all things considered. But the following passage from the Atlantic report makes the whole thing look far darker:

It is the third reason, though, Wikileaks wrote, that “is the real kicker.” “If we publish them it will dramatically improve the perception of our impartiality,” Wikileaks explained. “That means that the vast amount of stuff that we are publishing on Clinton will have much higher impact, because it won’t be perceived as coming from a ‘pro-Trump’ ‘pro-Russia’ source.”

See that full stop at the end of the last sentence there? That’s journalistic malpractice. We learned this when Donald Trump Jr. published the entirety of his private messages with WikiLeaks in response to the Atlantic article:

SCOOP: Turns out Donald Trump, Jr. corresponded with Wikileaks during the 2016 presidential campaign. My latest. https://t.co/pVGEBqmB9O

Incredible. The Atlantic edited "Trump Jr" DM story to reverse its meaning even removing "that the Clinton campaign is constantly slandering us with" right after "pro-Russia". Full text changes everything. https://t.co/8pNUF1xW23

Here is the entire chain of messages with @wikileaks (with my whopping 3 responses) which one of the congressional committees has chosen to selectively leak. How ironic! 1/3 pic.twitter.com/SiwTqWtykA 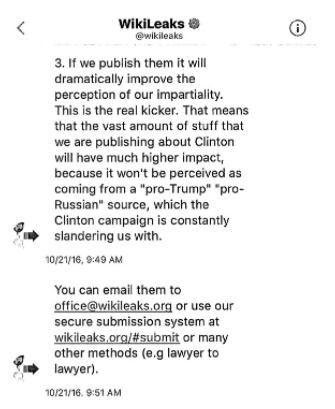 The author of the Atlantic article, Julia Ioffe, put a period rather than a comma at the end of the text about not wanting to appear pro-Trump or pro-Russia, and completely omitted WikiLeaks’ statement following the comma that it considers those allegations slanderous. This completely changes the way the interaction is perceived.

This is malpractice. Putting an ellipsis (…) and then omitting the rest of the sentence would have been sleazy and disingenuous enough, because you’re leaving out crucial information but at least communicating to the reader that there is more to the sentence you’ve left out, but replacing the comma with a period obviously communicates to the reader that there is no more to the sentence. If you exclude important information while communicating that you have not, you are blatantly lying to your readers.

And it made a difference in the way WikiLeaks was perceived, as evidenced by the things people who read the article are saying about Ioffe’s version:

It sure looks like Julian Assange admitted to Don Jr that WikiLeaks is a "pro-Trump, pro-Russia" organization…https://t.co/E78SqMRKge pic.twitter.com/tsH7TFSq2q

Wikileaks tried to get Don Jr. to leak his dad's tax returns: “That means that the vast amount of stuff that we are publishing on Clinton will have much higher impact, because it won’t be perceived as coming from a ‘pro-Trump’ ‘pro-Russia’ source.” https://t.co/UF6IfnJpLh

At first I wasn’t sure who was responsible for this highly egregious omission. It could have been Ioffe, an editor, the source of the leaked DMs or an intermediary deliverer who cut out the rest of the sentence. But then I read in The Guardian’s version of this story that Ioffe had actually tweeted to Don Jr. erroneously accusing him of excluding “a couple of missing pages” from his three-part release of his DMs with WikiLeaks. Ioffe eventually deleted the tweet, after it had been seen and reported on by many people, and clarified her error.

On Don Lemon right now, Julia Loffe of Atlantic Wikileaks article said that the screenshots that Don Jr. tweeted out tonight was missing a couple of crucial pages…

My bad, didn’t realize there were three tweets. Carry on!

What Ioffe’s tweets tell us is that she had full copies of the DMs, since she knew that there were more pages missing from the single tweet by Don Jr. that she had read. The deceitful omission that is the subject of this article was clarified in the first Don Jr. tweet she replied to. She read it, she analyzed it enough to figure out what was missing, but she said nothing about the fact that there were a lot more words in the sentence that she selectively edited out to convey the exact opposite of its meaning.

I’m no detective, but it sure looks like this was a willful omission on Ioffe’s part made deliberately with the intention of damaging WikiLeaks’ reputation. I have been attempting to contact Ioffe, whose other work for the Atlantic includes such titles as “The History of Russian Involvement in America’s Race Wars” and “The Russians Are Glad Trump Detests the New Sanctions”; I will update this article if she has anything she’d like to say.

Also worth noting is Ioffe’s omission of the fact that we’ve known since Julythat WikiLeaks had contacted Donald Trump Jr., as well as the fact that Julian Assange’s internet was cut at the time some of the Don Jr. messages were sent, meaning they may have been sent by someone else with access to the WikiLeaks account.

Contacted Trump Jr this morning on why he should publish his emails (i.e with us). Two hours later, does it himself: https://t.co/FzCttGSyr6

Major journalism fails by the Atlantic author @juliaioffe in the Atlantic hit piece:
She didn't disclose either of these key facts:

1. Assange's internet had been cut off prior to the October 21 tweets
2. Assange had publicly discussed having asked Trump JR to submit docs to WL pic.twitter.com/9ymtMPsP9Q

What percentage of Guardian readers do you think went and read the private messages published by Don Jr. for themselves and learned that they’d been manipulated? One percent? Half of one percent? Why would they go read the published DMs if their trusted Guardian was presenting itself as conveying the full truth?

The Atlantic’s senior editor is neocon David Frum, who is credited with coining the phrase “axis of evil” used in George W Bush’s jingoistic schtick, and its editor-in-chief is the neocon Jeffrey Goldberg. Its corporate owner, Atlantic Media Company, is chaired by New America’s David G. Bradley. New America is a DC think tank whose team includes representatives from Northrop Grumman and Raytheon along with big name media and corporate giants like CNN and Walmart, and whose top donors include Bill Gates, Google’s Eric Schmidt, and the US State Department.

So this immoral manipulation is not exactly surprising. These are virulently pro-establishment people.

My rule of thumb for the past year: whenever an OMG RUSSIA BOMBSHELL story breaks, wait 12 to 24 hours for the initial furor to subside, then assess. Has worked well so far.

Life cycle of a Trump story:
-Story publishes
-People skim the story, freak out
-Questions about whether this is the end of Trump
-That one dude does the BOOM
-People read the story
-Meh, they're not that bright but that's not collusion

Every time. This happens literally every single time there’s a new “bombshell” report on the Russiagate phenomenon, without exception. Twitter explodes, I’m bombarded with social media notifications telling me “HAHAHA I BET YOU FEEL LIKE AN IDIOT NOW”, then it turns out to be a basically innocuous revelation dishonestly blown up into something explosive by liars and manipulators in the establishment media. It’s fueled entirely by Trump derangement syndrome, not by facts.

And people ask why I’m skeptical of the establishment Russia narrative. I’m skeptical because we’re being lied to every single step of the way by the news media who claim to be helping the public discover the truth. Trump lies because he’s a corrupt billionaire who knows he can get away with it, but that doesn’t make him a Russian agent. The media lies because they’re bolstering the stranglehold of America’s unelected power establishment, and that makes them traitors to our species.

I stand with WikiLeaks. They’re doing more than anyone else to shake loose the nuts and bolts of the omnicidal death machine that is driving our species toward extinction, and that’s why that same death machine pours so much energy into tarnishing their reputation so their leaks will be dismissed. Even my fellow leftists have been largely won over by the ongoing psyop to paint Assange as an evil Nazi, and I simply have no respect for that perspective. When there’s such a massive, concerted effort by America’s unelected government to sabotage someone’s reputation, your belief that they’re bad is probably a deliberate and artificial construct.

The mainstream media is not your friend, America. It’s time to send them the way of the dinosaur before they do the same to us.

UPDATE 5 PM EST 11/14/17: Surprise, surprise, here’s Chris Hayes on MSNBC regurgitating Ioffe’s selectively edited quote on MSNBC. There will be others. There is no way to undo the damage that was done by this lie. At the end of the clip Ioffe actually asserts that her story confirms Russia-WikiLeaks collusion, without at any time acknowledging that the only thing in the story that makes it look that way is her selectively-edited quote.

If Russiagate was valid, the people selling it to us wouldn’t have to lie about it every single step of the way.

Hey you, thanks for reading! My work is entirely reader-funded so if you enjoyed this piece please consider sharing it around, liking me on Facebook, following me on Twitter, and maybe throwing some money into my hat on Patreon , on Paypal, or with Bitcoin: 1DguEVyWJU1eVDei25RH4Xj1eTLnxiS562

If you enjoy the content at iBankCoin, please follow us on Twitter
2017-11-15
zeropointnow
Share
Previous FBI Investigating 60 Money Transfers From Russia “To Finance Election Campaign of 2016”
Next Bitcoin Bounces Over 9% After Report Square Is Testing The Digital Currency