After falling nearly 30 percent below last week’s record high of $7,879.06 amid controversy over its future, Bitcoin surged more than 8 percent Wednesday to a high of $7,251.81 – returning it to within 10 percent of its all time high. 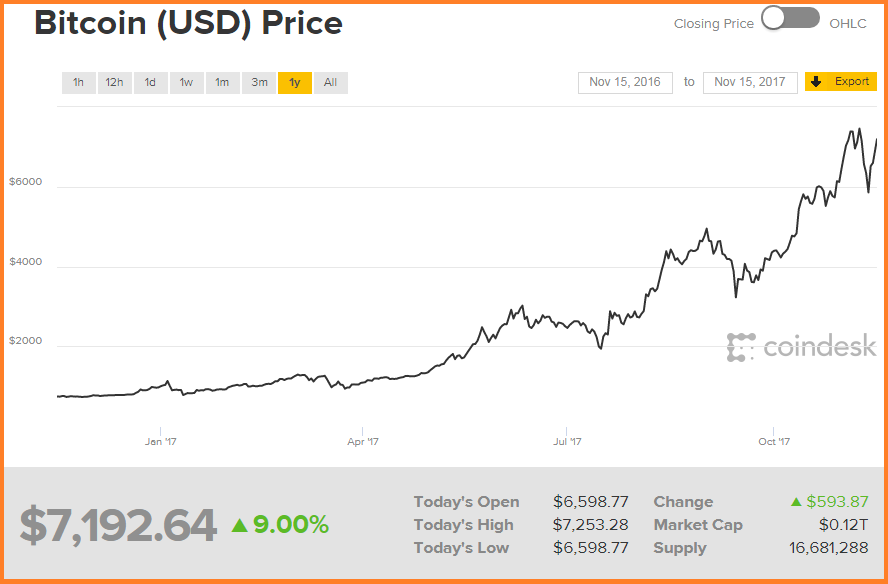 The sharp reversal in bloodshed comes after news that Jack Dorsey’s Square ($SQ) is actively testing support for Bitcoin transactions through its payments app Cash.

“We’re exploring how Square can make this experience faster and easier, and have rolled out this feature to a small number of Cash app customers,” a Square spokesperson said via email to CNBC. “We believe cryptocurrency can greatly impact the ability of individuals to participate in the global financial system and we’re excited to learn more here.”

Earlier Wednesday, Credit Suisse analysts published a note describing how “Bitcoin buying option could help stock,” sending Square up as much as 5 percent in trade, only to pull back.

Last week’s drop of 30% was due to controversy surrounding the digital currency’s future, after a plan to improve bitcoin’s transaction speeds and costs, known as “SegWit2x” was called off last Wednesday – leading to an initial surge to its record high before crashing hard.

An August upgrade to the bitcoin infrastructure split bitcoin into bitcoin and bitcoin cash, which traded slightly lower Wednesday to $1,243 – around 50% of its record high of $2,477 from Sunday.

CNBC also reports that “another version of bitcoin that launched Sunday, bitcoin gold, has tumbled more than 20 percent in the last 24 hours to around $161, according to CoinMarketCap. Bitcoin gold is an attempt to make “mining,” or creating, the digital currency less dependent on specialized hardware.”

Meanwhile, Thomas Peterffy – chairman of Interactive Brokers, the world’s largest electronic brokerage, took out a full page ad in the Wall St. Journal Wednesday to warn regulators about the dangers of bitcoin futures.

“This letter is to request [the CFTC] require any clearing organization that wishes to clear any cryptocurrency or derivative do so in a separate clearing system isolated from other products,” Peterffy wrote, warning that “Cryptocurrencies do not have a mature, regulated and tested underlying market. The products and their markets have existed for fewer than 10 years and bear little if any relationship to any economic circumstance or reality in the world.”

The ad comes two days after the president of the Chicago Mercantile Exchange (CME) said Bitcoin futures could trade as early as the second week in December.