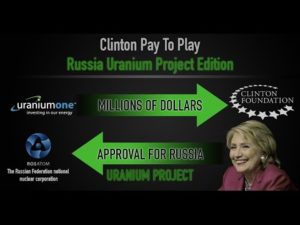 Acting on two requests from House Judiciary Committee Chairman Bob Goodlatte (R-VA), Attorney General Jeff Session has directed senior federal prosecutors to explore “certain issues” involving the sale of Uranium One, along with allegations of pay-for-play related to the Clinton Foundation – leaving the door open for the appointment of a separate Special Counsel investigation.

In a letter exclusively obtained by Fox news, the Justice Department responded to July 27 and September 26 requests from congressional Republicans.

The Justice Department does not ordinarily confirm or deny investigations, and Boyd wrote that “this letter should not be construed to do so.”

The Justice Department’s letter specifically said that some of the topics requested by Goodlatte and other committee members were already being investigated by the department’s Inspector General’s office.

The letter specifically mentioned allegations related to the FBI’s handling of the Clinton email probe, including allegations that DOJ and FBI “policies or procedures” were “not followed in connection with, or in actions leading up to or related to” then-FBI Director James Comey’s public announcement to close the Clinton email “matter” on July 5, 2016, or the letter he sent lawmakers on October 28, 2016, about newly discovered Clinton emails, and that those “investigative decisions were based on improper considerations.”

“The Department has forwarded a copy of your letters to the IG so he can determine whether he should expand the scope of his investigation based on the information contained in those letters,” Boyd added. “Once the IG’s review is complete, the Department will assess what, if any, additional steps are necessary to address any issues identified by that review.”

Also notable is the 143% increase in weapons sales granted to Clinton Foundation donors by Hillary Clinton’s State Department, along with over 200 Bill Clinton speeches approved by the Obama admin State Dept. worth over $48 million.

Whether or not the DOJ inquiry will turn anything up is a good question, as prosecuting potential Clinton crimes seem to be the last thing on Attorney General Jeff Sessions’ mind. He’d much rather jail people over a plant used by millions for medicinal purposes.

If you enjoy the content at iBankCoin, please follow us on Twitter
2017-11-13
zeropointnow
Share
Previous GOLD RUSH: Ray Dalio Loads Up, Adds 575 Pct To $GLD ETF Position To Become 8th Largest Shareholder
Next 2019 Corvette ZR1 Will Melt Your Face Off At 210 MPH