Samsung Electronics CEO and board member, Kwon Oh-hyun, has announced his resignation, citing (but not elaborating on) an ‘unprecedented crisis’ for the company.

Mr Kwon, 64, said that he had been thinking about resigning “for quite some time” and could “no longer put it off” after 32 years with the company – five of which he’s been CEO of Samsung Display.

“As we are confronted with unprecedented crisis inside out, I believe that time has now come for the company [to] start anew, with a new spirit and young leadership to better respond to challenges arising from the rapidly changing IT industry,” he said in a statement.

“There are no words to describe how proud I am that we built together one of the most valuable companies in the world. We have come a long way to create a company that truly changes how people live, work and communicate with each other,” Kwon’s letter continues. “But now the company needs a new leader more than ever and it is time for me to move to the next chapter of my life.”

He will remain on the board of Samsung Electronics until March 2018. 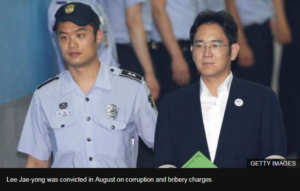 The giant Samsung, made up of 60 interlinked ‘line organizations’ is one of South Korea’s largest family-run businesses, known as ‘chaebols.’ Two months ago, Samsung group’s heir apparent, Lee Jae-yong was convicted of bribery and corruption – giving donations of 41bn won ($36m; £29m) to non-profit foundations operated by Choi Soon-sil, a friend of South Korea’s former President Park Geun-hye, in return for political favours.

Lee was sentenced to five years in jail, however he is currently appealing his sentence.

Samsung hasn’t announced a successor to Kwon, however the company has two other “co-CEOs,” BK Yoon and JK Shin. Both stepped back from daily operations in 2015 while retaining their titles.