OJ Futures Spike After Irma Wipes Out Half Of Florida Crops 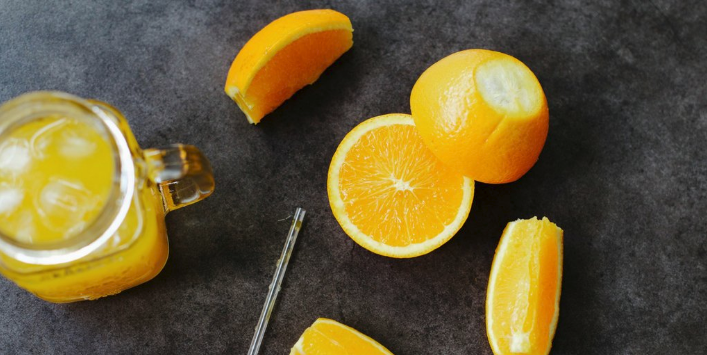 Florida has just produced its smallest crop of oranges since WWII after hurricane Irma wiped out almost half of the state’s legendary orange crop with its 160 mph winds, according to the USDA

Gene McAvoy, an agriculture expert with the University of Florida said “About 70 percent of what they were projecting is lost across the board.”

The news sent OJ futures spiking, and is expected to result in higher prices for oranges and orange juice at the store. 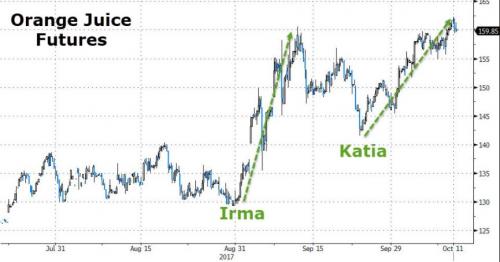 The November OJ futures contract is up around 20% since the end of August, surpassing the initial spike from Irma.

“We’ve actually taken out the highs from the hurricane rise,” said Jack Scoville, vice president for Price Futures Group in Chicago. He noted that the futures made it to about $1.60 a pound as Hurricane Irma was hitting but once the storm passed prices fell back to around $1.42 a pound.

McAvoy also said that overall citrus losses in Florida are around 70 percent statewide – and up to 90 percent in the south where the hurricane made landfall. “As you move north in the state, it goes lower,” he said.

Irma destroys much of Florida citrus crop | @SenBillNelson @marcorubio speaking in Polk county about the issue at 9am @10NewsWTSP #Irma pic.twitter.com/k0mnOjCqDQ

California is also a problem

Thanks to heavy rains last spring which helped end the massive drought in CA, many citrus trees lost their blooms – and many more have been weakened from years of drought.

“The California citrus crop is smaller than it’s been in the past five or six years,” said Joel Nelsen, president of the California Citrus Mutual, which represents more than 80 percent of the state’s citrus industry. “We’re attributing that to two things: the rain in the spring knocked off a lot of blossoms and … trees are still tired from the drought.” -CNBC

The good news is that while CA and FL production has been hampered, the citrus industry can import oranges and other fruits from Spain, Morocco, and other regions.