This has got to be some sort of Truman show mass social experiment to determine how retarded Americans are.

CNN is reporting that Russian propagandists used the popular Pokémon Go game, in which players go on a real-world scavenger hunt to find and “train” Pokémon characters, to stoke racial tension by sending players to areas in which police brutality had taken place. Players were then encouraged to name their Pokémon after black victims, such as Eric Garner, who died after a NYPD officer put him in a chokehold.

To be clear, CNN is claiming that Russia tricked people into taking up a traditionally liberal cause, in alignment with BLM, to divide America through racial tension and drive voters into Donald Trump’s arms. The other logical conclusion, of course, is that said propaganda would have encouraged left-wing political activism – bringing sympathetic social justice warriors to the polls – ostensibly voting for Hillary Clinton. 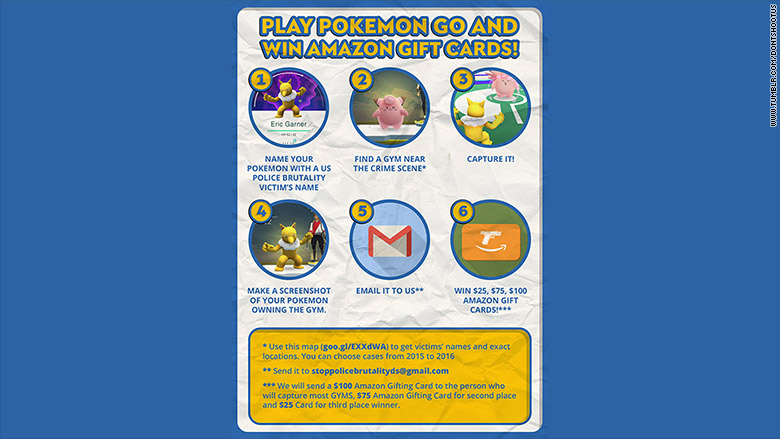 The campaign, titled “Don’t Shoot Us,” offers new insights into how Russian agents created a broad online ecosystem where divisive political messages were reinforced across multiple platforms, amplifying a campaign that appears to have been run from one source — the shadowy, Kremlin-linked troll farm known as the Internet Research Agency

A source familiar with the matter confirmed to CNN that the Don’t Shoot Us Facebook page was one of the 470 accounts taken down after the company determined they were linked to the IRA. CNN has separately established the links between the Facebook page and the other Don’t Shoot Us accounts.

The Don’t Shoot Us campaign — the title of which may have referenced the “Hands Up, Don’t Shoot” slogan that became popular in the wake of the shooting of Michael Brown — used these platforms to highlight incidents of alleged police brutality, with what may have been the dual goal of galvanizing African Americans to protest and encouraging other Americans to view black activism as a rising threat.

CNN reports that the “Don’t Shoot Us” campaign Facebook page was linked to one of 470 Facebook accounts deemed to be linked to a Russian propaganda effort. The campaign’s YouTube videos lead people to donotshoot.us, which links to a Tumbler account. In July 2016, the Tumbler account announced the Pokémon Go contest to go find areas with reported police brutality

Their evidence that “Don’t Shoot Us” is Russian? A guy named Daniel Reed, who described himself as the “Chief Editor” of DoNotShoot.us, emailed interview answers for an article to student-journalist Arpita Mitra of the website IPF (International Press Foundation) in a Word document, which Mitra forwarded to CNN. Upon analyzing the document’s metadata, CNN claims the Russian word “Название” (“name“) was found in the document’s properties.

From that, CNN says two cybersecurity experts who reviewed the document said it was likely created on a computer or program running Russian as its primary language.

CNN can’t really figure out why the Russians would take up primarily liberal social justice causes, writing “It’s unclear what the people behind the contest hoped to accomplish, though it may have been to remind people living near places where these incidents had taken place of what had happened and to upset or anger them.”

CNN has not found any evidence that any Pokémon Go users attempted to enter the contest, or whether any of the Amazon Gift Cards that were promised were ever awarded — or, indeed, whether the people who designed the contest ever had any intention of awarding the prizes.

There you have it – Russians influenced US politics by taking up liberal social justice activism in alignment with Black Lives Matter, their endgame being to stoke racial tensions and somehow, some way, influence the election in favor of Donald Trump.

I wonder if Comrade Silverman is in on it?