POOF! YOUR BULLSHIT OVERSOLD BOUNCE IS OVER

Q2 STARTS OFF WITH A BOGGING

Did California’s Plastic Bag Ban Cause Massive Hepatitis A Outbreak?

ZeroHedge is out with another report on the San Diego Hepatitis A outbreak, which on the verge of reaching “statewide epidemic status” after killing over a dozen people and infecting over 400.

The disease is transmitted through contaminated food, or touching surfaces containing infected feces before touching one’s eyes, nose, or mouth. California’s outbreak is being spread primarily person-to-person, almost exclusively within the homeless community.

To combat the outbreak, San Diego has been pressure washing sidewalks with bleach in order to sanitize the streets. 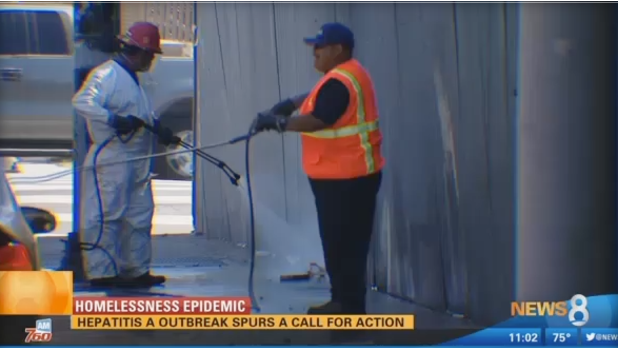 And now, the LA Times reports that the outbreak which began in March is spreading through homeless tent cities from San Diego to Sacramento.

California’s outbreak of hepatitis A, already the nation’s second largest in the last 20 years, could continue for many months, even years, health officials said Thursday.

At least 569 people have been infected and 17 have died of the virus since November in San Diego, Santa Cruz and Los Angeles counties, where local outbreaks have been declared.

Dr. Monique Foster, a medical epidemiologist with the Division of Viral Hepatitis at the U.S. Centers for Disease Control and Prevention, told reporters Thursday that California’s outbreak could linger even with the right prevention efforts.

“It’s not unusual for them to last quite some time — usually over a year, one to two years,”Foster said.

While San Diego is ground zero for the outbreak, over 80 people have been diagnosed in Santa Cruz and L.A. counties – leading many to wonder how it began.

With the passage of Proposition 67 in the November 2016 election, California became the first state in the nation to institute a state-wide ban of single-use bags – which went into effect the day after the election on November 9.

It stands to reason that with no more cheap, convenient, and ubiquitous plastic bags to use, homeless people are now spreading hepatitis-rich feces all over the streets.

The outbreak in San Diego also comes on the heels of a massive reduction in transitional housing for the homeless, which has increased concentrated ‘tent cities.’

According to the San Diego Union Tribune, many locals feel the Hepatitis outbreak was avoidable.

“This whole crisis is man-made,” said Michael McConnell, a La Jolla coin dealer and advocate for homeless residents. “The response is certainly much too late, based on when they knew they had a serious problem. Even today, all they’ve done is the most easy stuff. They have taken zero bold action.”

“The reason the outbreak has spread so rapidly is because homeless are living in more concentrated areas,” said Dr. Jeffrey Norris, the St. Vincent De Paul medical director who has been managing the charity’s response to the public health threat. “They often have to defecate in their tent, or next to their tent, and that exposes their neighbors on the street. Hygiene becomes incredibly difficulty.”

If you enjoy the content at iBankCoin, please follow us on Twitter
2017-10-11
zeropointnow
Share
Previous Virtue Signaling Ben Affleck ‘Saddened and Angry’ About Weinstein, Immediately Called Out For Molesting Two Women
Next OJ Futures Spike After Irma Wipes Out Half Of Florida Crops