Actor Matt Damon was dissed over Twitter Monday evening following viral claims that he and Russell Crowe pressured a New York Times journalist into dropping a negative story on Harvey Weinstein in 2004.

On Sunday, journalist and founder of The Wrap, Sharon Waxman, penned an op-ed detailing how Damon and Crowe called her “directly” to pressure  her into dropping a story about Miramax Italy’s head Fabrizio Lombardo handling “Weinstein’s women needs.”

The next day, actress Rose McGowan – who was featured in a bombshell NYT Exposé detailing Harvey Weinstein’s sexual abuse of young actresses, retweeted the story after it was picked up by vulture.com – asking “Do u realise [sic] how deep the cover ups go?” 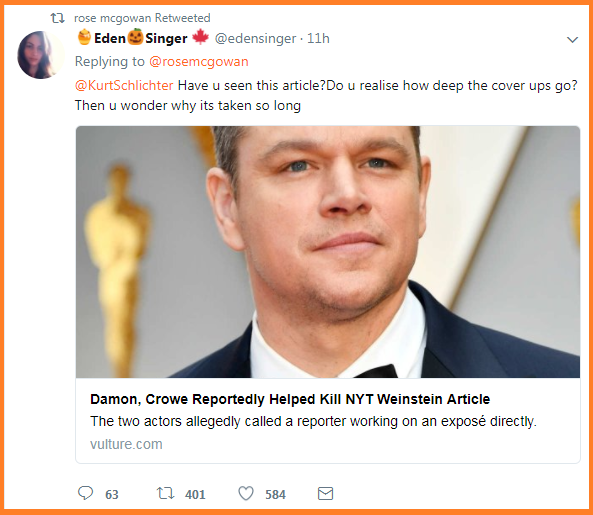 Sharon Waxman, founder of the Wrap, writes that her own investigate reporting, which took her on an international trip to uncover rumors of Weinstein’s sexual misconduct, was cut from the Times in 2004 under pressure from several Hollywood elites. Waxman alleges in the Wrap that Matt Damon and Russell Crowe called her “directly” to dispel the reports she was following about Miramax’s Italian head Fabrizio Lombardo, who was allegedly hired “to take care of Weinstein’s women needs.”

In response to Waxman’s op-ed, the New York Times claims her story “did not have anything near what was revealed in our story,” adding “Mainly, she had an off-the-record account from one woman.”

McGowan then tweeted “Hey @mattdamon what’s it like to be a spineless profiteer who stays silent?”

Hey @mattdamon what’s it like to be a spineless profiteer who stays silent? pic.twitter.com/rp0OrRrpqJ

As a result of the NYT piece last week, Weinstein was fired from his company – but not before he would send an embarrassing email to fellow hollywood bigwigs asking for their immediate support. Weinstein writes:

My board is thinking of firing me. All I’m asking, is let me take a leave of absence and get into heavy therapy and counseling. Whether it be in a facility or somewhere else, allow me to resurrect myself with a second chance. A lot of the allegations are false as you know but given therapy and counseling as other people have done, I think I’d be able to get there.

I could really use your support or just your honesty if you can’t support me.

But if you can, I need you to send a letter to my private gmail address. The letter would only go to the board and no one else. We believe what the board is trying to do is not only wrong but might be illegal and would destroy the company. If you could write this letter backing me, getting me the help and time away I need, and also stating your opposition to the board firing me, it would help me a lot. I am desperate for your help. Just give me the time to have therapy. Do not let me be fired. If the industry supports me, that is all I need.

With all due respect, I need the letter today.

One wonders who wrote letters for Harvey?

The mogul does have his defenders, after all. Fashion Designer Donna Karen, who loves the pizza in Haiti – which is not known for its pizza, suggested to the Daily Mail that Weinstein’s alleged victims may have been ‘asking for it’ in a rambling interview.

Director Kevin Smith, on the other hand, is ashamed to have made money with Weinstein:

He financed the first 14 years of my career – and now I know while I was profiting, others were in terrible pain. It makes me feel ashamed. https://t.co/T0hInW7EqJ

A 4chan post from 10 months ago suggests “The Fappening” leak of celebrity nudes all came from Weinstein’s iPhone:

How many Hollywood celebrities and executives – particularly those who feigned outrage at Donald Trump’s ‘pussy grabbing’ comment, have remained silent as countless humans beings were trafficked into Harvey Weinstein’s lair to satisfy his urges?