As fire rages across Northern California, killing 15 and forcing over 20,000 people to evacuate after burning at least 73,000 acres, Napa valley wine enthusiasts are bracing for a rise in wine prices from smaller producers, as well as a phenomenon referred to as “smoke taint,” which occurs when smoky particulates in wildfire-affected areas are absorbed by grape vines and berries.

Often referred to as “off-flavors,” connoisseurs sometimes describe “smoke taint” flavors as “‘smoky,’ ‘bacon,’ ‘campfire’ and ‘ashtray,’ are usually long lasting and linger on the palate even after the wine is swallowed or spit out,” according to a smoke taint primer from ETS Laboratories, which performs scientific analyses for the wine industry. 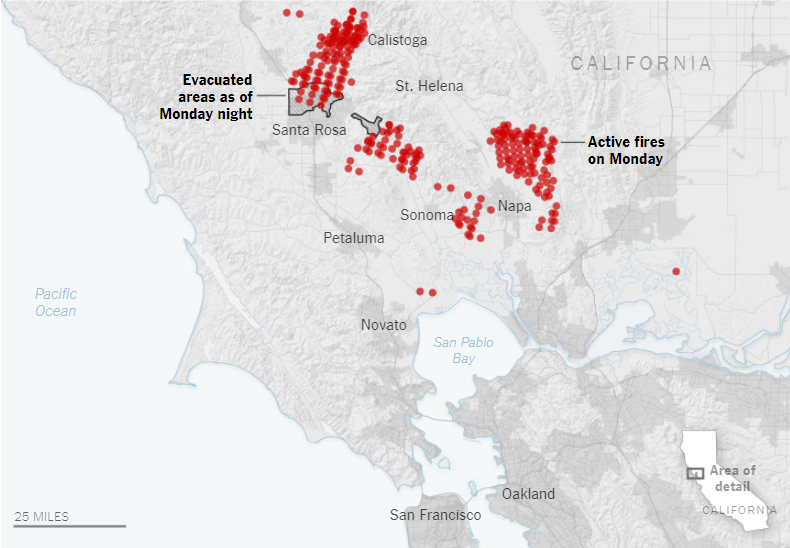 With zero containment of the active fires in Napa and at least five vineyards destroyed so far, it is impossible to gauge which remaining wineries will be most affected or how much of the 2017 crop will be affected by smoke taint. Despite the fact that much of the 2017 harvest already in, fruit left to ferment in open-air containers as well as grapes left on the vine to extract maximum flavor are at risk.

“Some of these grapes are left to hang to create more sugar content, more ripeness, more voluptuousness, to create the Napa style,” said Christian O’Kuinghttons, a sommelier and cellar master in Reno, Nev., with ties to the California wine country lying about 3 1/2 hours west.

“You could have smoke taint with whatever is left to be harvested. The vines have no other choice but to breathe it in.”

While methods exist to remove the smoke taint flavoring, they “take away all the character of the wine,” O’Kuinghttons said.

The main fire in Napa County is the Atlas Peak Fire, which started late Sunday night. Atlas Peak, in the foothills of the Vaca range, lies northeast of the city of Napa. The Atlas Peak appellation is known for growing varietals like cabernet sauvignon, cabernet franc, merlot, malbec and petit verdot that producers fashion into boldly flavored reds.

The Atlas Peak fire spread from the Vaca foothills to the southwest, roughly along Silverado Trail, a major Napa Valley artery, until it reached the outskirts of the city of Napa. The blaze has encompassed about 25,000 acres.

According to the Associated Press, affected wineries in the Atlas Peak Fire zone include Signorello Estate, a now-destroyed producer of reds and red blends, and William Hill Estate Winery, a producer of chardonnay and Bordeaux-style reds whose sign and landscaping were singed but whose winery survives.

PlumpJack Winery, at the edge of the zone to the north, posted to Facebook on Tuesday that “by some miracle, all four of our Napa Valley wineries were untouched by the devastating fire,” although “both PlumpJack and Odette Estate wineries are without power and inaccessible.”

The main fire in Sonoma County, the Tubbs Fire, also began late Sunday, near the city of Calistoga in Napa County, before spreading over the border to the city of Santa Rosa and surrounding areas. The fire has engulfed more than 27,000 acres.

On the Napa side, a portion of the Calistoga appellation lies within the Tubbs Fire zone. The appellation, with vineyards as high as 1,200 feet in elevation, is known for its cabernet sauvignon, zinfandel, merlot and cabernet franc, all red varietals, and its sauvignon blanc, a white varietal.

On Monday, the winery posted to Facebook that “the winery remains out of harms way, but with fires still burning, roads closed and many of our employees evacuated,” all tours and tastings have been canceled.

On the Sonoma side, the Tubbs Fire zone includes an area tightly populated by wineries in the southern portion of the Russian River Valley to the north of Santa Rosa. According to the Associated Press, Paradise Ridge, a producer of sauvignon blanc, chardonnay and pinot noir, has been destroyed.

‘Too early to tell’

Even wineries left untouched or lightly touched by actual flames can be affected by smoke taint from surrounding fires. And some wineries will face far worse than taint: the partial or total destruction of their vineyards by wildfire.

“The only thing the winery can possibly do is treat the soil and replant,” O’Kuinghttons, the sommelier and cellar master, said. “It’s going to take five to seven years or even more to get fruit that is even comparable to the fruit you used to get. You’re looking at a seven-year drought for wine. That’s concerning.”

Riley added that consumers should not assume an automatic rise in wine prices next year as a result of the wildfires.

A smaller winery affected by the fires, one that produces only a few thousand cases annually, could very well increase its prices for the 2017 vintage and several vintages beyond, Riley said.

But “if it’s a large winery, if they are financially stable and can handle (the effects of the fire) long-term, they may say, ‘We’ve got other assets, we’ve got vineyards in Chile,’ and hold their prices. There’s a lot of economics involved.”