Russian Prime Minister Dmitry Medvedev, who is effectively Putin’s Press Secretary, lashed out against Donald Trump over Twitter today after the U.S. president ‘begrudgingly’ signed a new bill into law placing new sanctions on Russia, while limiting his own power to lift them without Congressional approval. While the bill was passed by an overwhelming ‘veto-proof’ margin, Trump could have refused to sign – but says he did so for the sake of ‘national unity.’

Kind of cucked, no?

The Russian PM said that Trump was ‘fully outwitted’ by the US establishment, and that the signing of the bill “ends hopes for improving our relations,” promising “a few consequences” – followed by some serious shit talking over Facebook. 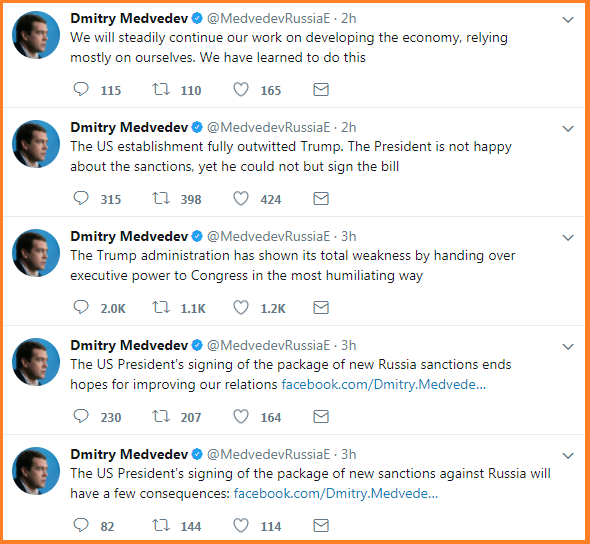 After Trump signed the bill, he issued a statement through Rex Tillerson noting his disagreement with several parts of the legislation – which also targets Iran and North Korea, saying that the encroachment on presidential authority may have unintended consequences.

“While I favor tough measures to punish and deter aggressive and destabilizing behavior by Iran, North Korea, and Russia, this legislation is significantly flawed,” the statement released by the White House said. And once again, Trump bends the knee to the Russia narrative we all know he doesn’t believe.

Congress, on the other hand, is worried that Trump may inappropriately favor Russia after unsupported whispers of collusion in the 2016 election continue to haunt the President.

Lawmakers say they want to prevent the president from acting on his own to lift penalties imposed by the previous administration for meddling in last year’s U.S. election and for aggression in Ukraine. House and Senate committees and the Federal Bureau of Investigation are examining possible ties between the Trump campaign and Russia.

In a statement on Facebook, Russia essentially called Trump a bitch on Congress’s leash – stating that the new sanctions are “another way to put Trump in his place,” with the ultimate goal of removing him from power.

“an incompetent player must be eliminated.” (ouch) 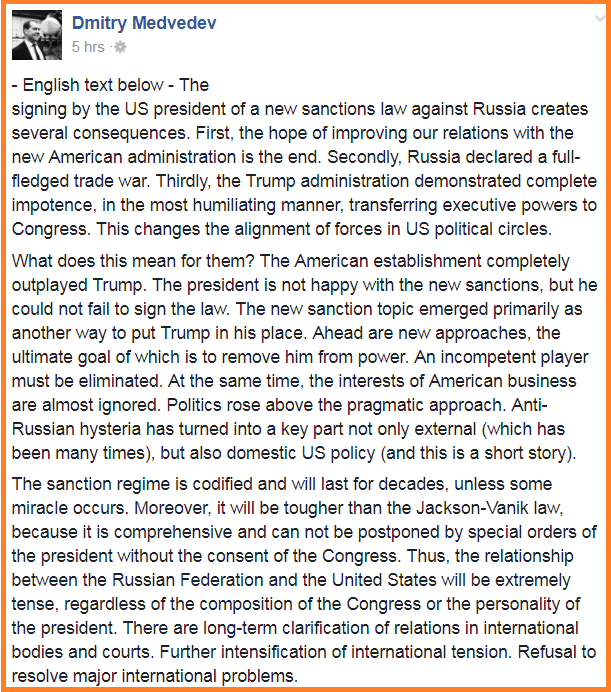 Don’t worry Dmitry, once Trump completes his purge of Washington, all these pesky sanctions will go away – I’m sure of it. After all, Trump is playing 6D interplanetary rugby bitches.

Today, I signed into law the ‘Countering America’s Adversaries Through Sanctions Act,’ which enacts new sanctions on Iran, North Korea, and Russia. I favor tough measures to punish and deter bad behavior by the rogue regimes in Tehran and Pyongyang. I also support making clear that America will not tolerate interference in our democratic process, and that we will side with our allies and friends against Russian subversion and destabilization.

That is why, since taking office, I have enacted tough new sanctions on Iran and North Korea, and shored up existing sanctions on Russia.

Since this bill was first introduced, I have expressed my concerns to Congress about the many ways it improperly encroaches on Executive power, disadvantages American companies, and hurts the interests of our European allies.

My Administration has attempted to work with Congress to make this bill better. We have made progress and improved the language to give the Treasury Department greater flexibility in granting routine licenses to American businesses, people, and companies. The improved language also reflects feedback from our European allies – who have been steadfast partners on Russia sanctions – regarding the energy sanctions provided for in the legislation. The new language also ensures our agencies can delay sanctions on the intelligence and defense sectors, because those sanctions could negatively affect American companies and those of our allies.

Still, the bill remains seriously flawed – particularly because it encroaches on the executive branch’s authority to negotiate. Congress could not even negotiate a healthcare bill after seven years of talking. By limiting the Executive’s flexibility, this bill makes it harder for the United States to strike good deals for the American people, and will drive China, Russia, and North Korea much closer together. The Framers of our Constitution put foreign affairs in the hands of the President. This bill will prove the wisdom of that choice.

Yet despite its problems, I am signing this bill for the sake of national unity. It represents the will of the American people to see Russia take steps to improve relations with the United States. We hope there will be cooperation between our two countries on major global issues so that these sanctions will no longer be necessary.

Further, the bill sends a clear message to Iran and North Korea that the American people will not tolerate their dangerous and destabilizing behavior. America will continue to work closely with our friends and allies to check those countries’ malignant activities.

I built a truly great company worth many billions of dollars. That is a big part of the reason I was elected. As President, I can make far better deals with foreign countries than Congress.