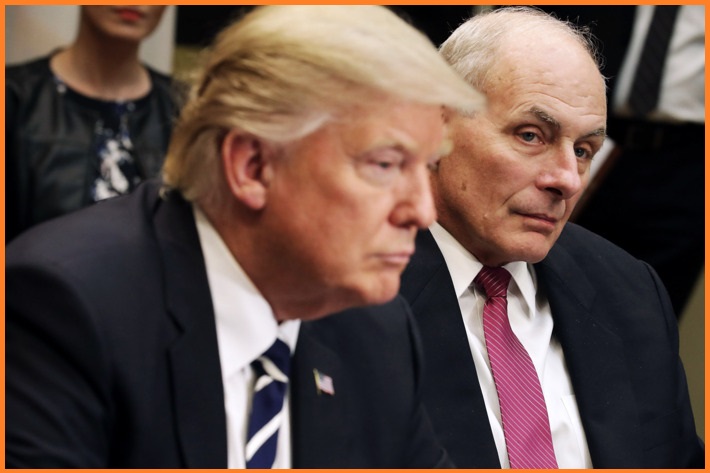 In a revealing 2014 interview, the retired 4-star US Marine Corps general told PRISM magazine that the ‘most concerning’ threat facing the United States comes from international criminal networks trafficking in drugs and sex workers:

These are international criminal networks – everything gets in. Hundreds and hundreds of tons of illicit narcotics. Relatively small amounts are taken out of the flow by our border controls. Tens of  thousands of sex workers, in many cases adolescents, come into the United States every year through these networks to serve the sex industry. I spoke at a human rights conference at the University of South Florida, in Tampa. The audience was shocked when I talked about sex workers. –Gen John Kelly

Upon taking office, President Trump made the fight against human trafficking and pedophilia a top priority for his administration – kicked off by a human trafficking awareness ad released in early February by the Department of Homeland Security (headed by… General Kelly, 67).

Wow, new DHS / ICE Human Trafficking vid opens with a #Pizzagate ref: "The signs are there, sometimes you just have to take a second look" pic.twitter.com/DgatsUnWzq

That was only the beginning. Five days later on February 9, Trump signed an Executive Order to combat human trafficking (“Presidential Executive Order on Enforcing Federal Law with Respect to Transnational Criminal Organizations and Preventing International Trafficking”).

Then in late February, Trump told a room of advisors and representatives from anti-trafficking organizations that he vowed to fight the ‘epidemic’ of human trafficking, promising to bring the ‘full force and weight‘ of the U.S. government to address the problem. Of note, a record 1500+ arrests of pedophiles or sex traffickers were made during Trump’s first month in office.

And in a June speech at a launch ceremony for the State Department’s 2017 Trafficking in Persons Report, Ivanka Trump said that ending human trafficking is in our ‘moral and strategic interests,’ and a top White House priority.

Finally, last Friday, President Trump told a group of law enforcement officials on New York that human trafficking is possibly worse ‘than it’s ever been in the history of the world.’

Trump’s February Executive Order was aimed at international cartels dealing in both drugs and human trafficking – and MS-13 has been singled out as a primary threat.

These groups are drivers of crime, corruption, violence, and misery. In particular, the trafficking by cartels of controlled substances has triggered a resurgence in deadly drug abuse and a corresponding rise in violent crime related to drugs. Likewise, the trafficking and smuggling of human beings by transnational criminal groups risks creating a humanitarian crisis.

The weak illegal immigration policies of the Obama Admin. allowed bad MS 13 gangs to form in cities across U.S. We are removing them fast!

For a brief look into the gang, Tucker Carlson recently traveled to El Salvador for his week-long series “Hunting MS-13,” which includes an interview with a cartel assassin:

To that end, Gen. Kelly also shared his thoughts on cartels in 2014 with PRISM magazine:

These are international criminal networks – everything gets in. Hundreds and hundreds of tons of illicit narcotics. Relatively small amounts are taken out of the flow by our border controls.

“Could someone come in with a weapon of mass destruction, biological weapon travel on this network?” Of course! Last year [2013], this network carried 68,000 children into the United States. We are dealing with a very efficient network, which worries me.

Can you see why Trump chose Kelly from the beginning?

John Kelly is a plain spoken pragmatist who lost his son in President Bush’s ill fated desert wars. He understands crime – both within the United States, and the external elements which fuel the problem. He speaks of democracy and sovereign rights. When asked by PRISM magazine in 2014 about anti-American sentiment brewing in South America, Kelly responded “if they are all functioning democracies – as we understand it with a functioning free press, with functioning human rights protections, with militaries sub-ordinate to civilian control – they have every right to go in any direction they want and choose their alliances.”

In other words, Kelly’s core values are in alignment with the constitution and the ‘law and order’ presidency Trump promised when he was elected. He’s also a disciplinarian, a seasoned voice of reason, and perhaps most importantly – a key player in the shrinking circle of advisors the President can trust.