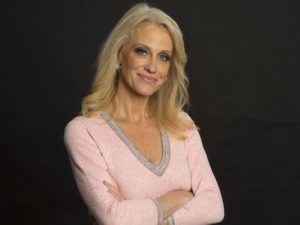 According to anonymous spiders in the White House, Trump advisor and former campaign manager Kellyanne Conway is being considered as the next Communications Director, according to the Daily Caller. The rumor comes hours after former director Anthony Scaramucci was fitted with a pair of concrete shoes and chucked into the Potomac just 10 days after starting his new job.

I guess that’s what happens when you A) reveal the White House has ‘FBI digital fingerprints’ on leakers, B) tell a reporter for the New Yorker that Trump’s Chief Strategist Steve Bannon “sucks his own cock,” C) Leak the impending ouster of the President’s Chief of Staff, and D) erroneously refer to the publication of a publicly available financial disclosure as a “felony leak.”

Scaramucci displayed extreme ignorance less than two weeks at his job – starting with the fact that one should never assume a conversation with a reporter for the “MSM opposition party” is off the record – especially if you’re the COMMUNICATIONS DIRECTOR FOR THE GOD DAMN WHITE HOUSE.

I liked Scaramucci’s swagger and the fact that he was a true outsider, and I didn’t mind his coarse language – but that level of dumbfuckery cannot be overlooked.

I haven't seen an Italian dude fly by that fast since Mario Andretti. #Scaramucci