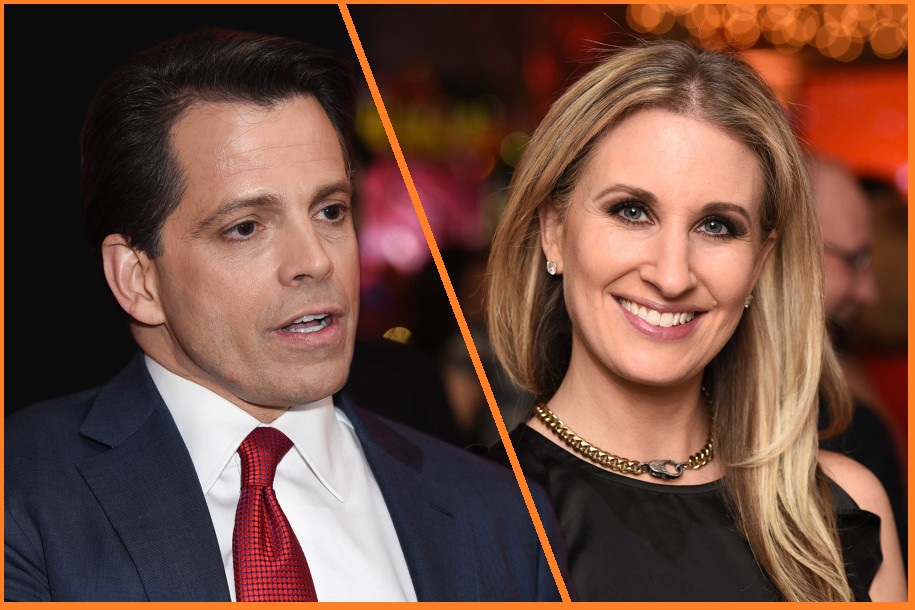 One day after a New Yorker journalist published a late-night potty-mouthed tirade by Trump’s new communications director, Anthony Scaramucci, ‘The Mooch’ has reportedly been served with divorce papers, according to Page Six. He and soon to be ex-wife Diedre Ball are believed to have been married since 2014 and have two children together. Ball grew “tired of his naked ambition, which is so enormous that it left her at her wits’ end.” 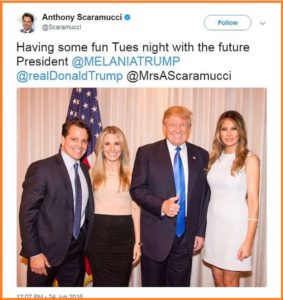 Ball apparently hates Donald Trump, “and she hasn’t exactly been on board and supportive of Anthony and his push to get back into the White House” according to the source, before dropping the bombshell: “Deidre has left him and has filed for divorce. She liked the nice Wall Street life and their home on Long Island, not the insane world of D.C. – adding

“I don’t know who Deidre thought she was marrying but anyone who knows Anthony knows he’s an ambitious man.”

“…the Wall Street financier, 52, had been “hell-bent” on claiming his position at the White House after he was originally pegged for a senior role and sold SkyBridge Capital in preparation in January.

He was blocked by Reince Priebus, Trump’s chief of staff. But, after an aggressive campaign, Scaramucci was made communications director on June 21 by Trump, prompting Sean Spicer to quit.

A second source close to Scaramucci — who has alternately not been wearing his wedding ring, or has been sporting it on his right hand — said the former couple had fought over his loyalty to Trump. This was his second marriage and Ball was noticeably not present at his recent SALT conference in mid-May.”

In response to the media frenzi, Scaramucci made a Godfather-esque tweet to leave “civillians” out of this: 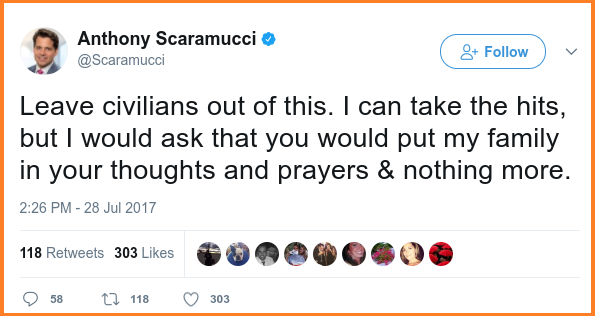 If you enjoy the content at iBankCoin, please follow us on Twitter
2017-07-28
zeropointnow
Share
Previous Imran Awan Subscribed To Pedo-Centric YouTube Channel Exposed By Tosh.0
Next Shock Claim From Inside DNC: Seth Rich Leaked Emails To Moscow Lawyer One Month Before His Murder