During last week’s G20 meeting in Hamburg, Germany, Ivanka Trump “briefly” sat in for her father during a meeting with global leaders on African migration and health. 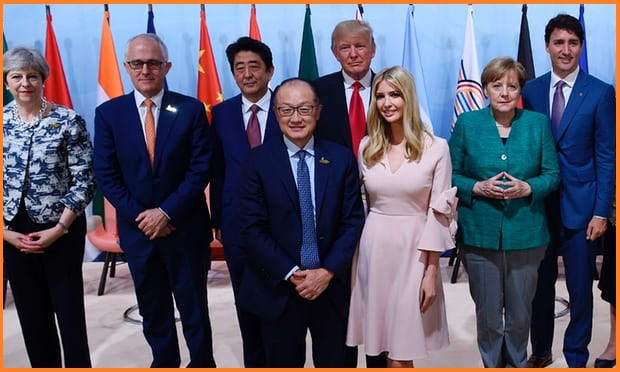 The 35 year former businesswoman and fashion model sat at the table with Xi Jinping, Recep Tayyip Erdogan, Angela Merkel, and Theresa May.

A spokesman for Ivanka Trump told Bloomberg that she had been sitting in the back of the room and then briefly joined the main table when the president stepped out of the meeting on African migration and health.

Naturally, the left freaked out.

The current administration’s detractors quickly got to work denouncing the sit-in as nepotism, attacking Ivanka’s credentials.

Maxine Waters told MSNBC: “It does not make good sense. Here you have the president of the United States at the G20, representing us as the leader of the free world, and so he’s going to play politics and give his daughter a chance to have a place in the sun and to be seen at a very important meeting that she knows nothing about.

She cannot in any way deal with those members who are there representing those countries. She doesn’t know anything about these issues.”

Wow – so a woman represents the United States at the G20 on African migration and health issues and the left, which is full of so-called feminists, can’t stand it…

Meanwhile, Merkel’s got Ivanka’s back

Angela Merkel commented on Ivanka’s presence during the meeting, stating: “The delegations themselves decide, should the president not be present for a meeting, who will then take over and sit in the chair…

Ivanka Trump was part and parcel of the American delegation so that is something that other delegations also do. It’s very well known that she works at the White House and is also engaged in certain initiatives.”

When I left Conference Room for short meetings with Japan and other countries, I asked Ivanka to hold seat. Very standard. Angela M agrees!

If Chelsea Clinton were asked to hold the seat for her mother,as her mother gave our country away, the Fake News would say CHELSEA FOR PRES! 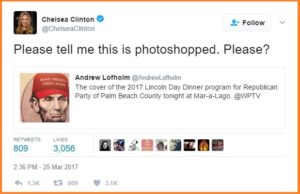 In response to Trump’s Tweet, Chelsea Clinton added to her enormous pile of embarrassing Twitter moments with an attempt at humor that, once again, revealed what an utter moron she is.

Despite being besties with Ivanka, the former first daughter took a pot shot at President Trump.

Good morning Mr. President. It would never have occurred to my mother or my father to ask me. Were you giving our country away? Hoping not. https://t.co/4ODjWZUp0c

Of course it wouldn’t occur to them to have you sit in Chelsea – you’re an idiot!

If the rumors are true, Chelsea’s run for congress in 2018 is going to be amazing to witness.

The Left Attacks @IvankaTrump Sitting In At #G20

If It Was #Chelsea They Would Be Calling Her The Next President pic.twitter.com/6uoYxrGW2W