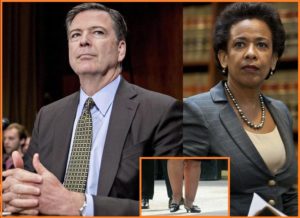 Senators investigating Russian interference in the 2016 election have formally requested that ex-Attorney General Loretta Lynch answer questions over allegations she provided Hillary Clinton with “political interference” during the 2016 presidential election. Bipartisan letters were sent to Lynch and others on Friday from Senators Grassley (R-IA), Feinstein (D-CA), Graham (R-SC), and Whitehouse (D-RI).

Of particular interest are questions which arose in an April New York Times article detailing a batch of hacked Russian intelligence documents obtained by the FBI which allegedly contain an email from DNC Chair Debbie Wasserman Schultz to Leonard Bernardo – an official with the Open Society Foundation, stating that Lynch told a DNC operative that she “would not let the FBI investigation into Clinton go too far.”

The questions in the Senate letter seek to determine whether Lynch is aware of the hacked email, the authenticity of the document, and who Lynch may have communicated with regarding the Clinton investigation – specifically mentioning Amanda Renteria, who filled the “Hispanic woman” position mentioned in the Podesta emails which the Clinton Campaign sought for a role as political director of her 2016 presidential campaign.

Also of interest but not included in Friday’s letter are questions Senator Graham had previously raised after fired FBI Director James Comey revealed during his June 8 testimony that he was pressured by Lynch to refer to the Clinton email investigation as a “matter” instead of an investigation – which gave Comey a ‘queasy’ feeling. Comey also said that he was ‘disturbed’ by Lynch’s secretive ‘tarmac’ meeting with Bill Clinton.

Was she [Lynch] gonna to authorize us to confirm that we had an investigation? And she said “Yes, but don’t call it that. Call it a ‘matter.’ And again, you look back in hindsight – you think, ‘should I have resisted harder? I just said, ‘alright, this isn’t a hill worth dying on.'”

It gave me a queasy feeling.

Lynch and others who received letters from the committee have until July 6 to comply with the request.

If you enjoy the content at iBankCoin, please follow us on Twitter
2017-06-23
zeropointnow
Share
Previous Arab States Issue 13 Demands To Qatar – Include Unfriending Iran, Beheading Al-Jazeera And Nixing Turkish Base
Next Bernie And Jane Sanders Lawyer Up Amid FBI Fraud Probe