Every time a terrorist strikes in the UK, the government pounces on some new initiative or measure to strip rights from citizens and censor content deemed to be offensive – all under the guise of security.

After this week’s attack on a London Mosque, the Muslim Council of Britain warned that “Newspapers are spreading hate.”

“We have national newspapers spreading hate and talking about how less Islam is the answer to terrorism that we face right now.

“These people are spreading hate against Muslims and people might be responding to that hate, talking about less Islam, and [something like this attack] may be the result.” –Independent

Prime Minister Theresa May responded to the attack with a promise to crack down on ‘growing extremism online,’ adding “There has been far too much tolerance of extremism in our country over many years – and that means extremism of any kind, including Islamophobia.”

And when British Muslim Salman Ramadan Abedi killed 23 and wounded 119 after detonating a shrapnel-laden bomb at an Ariana Grande concert on May 22nd, Theresa May issued a statement saying that the act was a “perversion of Islam,” followed by government officials telling newspapers that change was in the air – per the UK’s new Investigatory Powers Act…

The specific powers being discussed – named Technical Capability Orders – require big technology and internet companies to break their own security so that messages can be read by intelligence agencies. Government will ask parliament to allow the use of those powers if Theresa May is re-elected, senior ministers told The Sun. 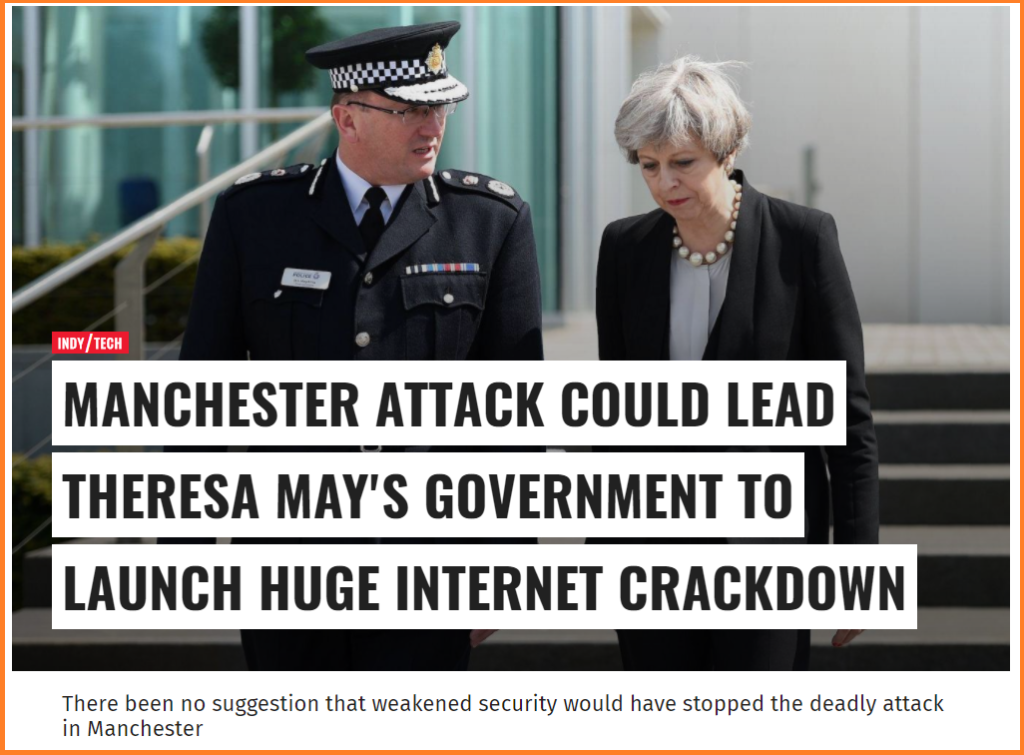 May also accused tech companies such as Google of providing a “safe space” for content deemed extremist (deemed by whom?). Two weeks later, Google General Counsel Kent Walker rolled out four new measures which basically translate to “we will censor whatever the fuck we don’t like, or whatever we’re told not to like.” Per ZeroHedge:

The biggest change? Questionable content that doesn’t explicitly meet the grounds for removal under the YouTube’s terms of use will now be buried, as the New York Times noted, while the site also plans to enhance its abilities to automatically filter out content that does meet these standards.

These videos will now come with a warning, be banned from featuring adds or collecting advertising revenue, or be recommended, endorsed, or commented on. Users will still be able to find the content once the policy goes into effect, but it will eliminate one of the most prominent means of transmission – sharing over social media networks like Twitter and the messaging app Telegram.

“…we will be taking a tougher stance on videos that do not clearly violate our policies — for example, videos that contain inflammatory religious or supremacist content. In future these will appear behind an interstitial warning and they will not be monetised, recommended or eligible for comments or user endorsements. That means these videos will have less engagement and be harder to find. We think this strikes the right balance between free expression and access to information without promoting extremely offensive viewpoints.”

Google is also launching a new ‘social-intervention’ program which uses ‘targeted online advertising’ to dissuade young terrorist recruits from a life of Jihad – redirecting them to non-terrorist content. So along with the UK’s massive internet crackdown, internet giants like Google, Facebook, and Twitter are (selectively) taking active measures to censor content under the pretext of fighting terrorism.

In addition, the #1 search engine will utilize a “trusted flagger” program – which probably won’t include an even balance of conservatives and liberal arbiters of fake or offensive content.

What that slippery slope translates to is anything deemed counter to Google / Facebook / Twitter’s core liberal values won’t be monetized in the future – which is something conservative content producers have already encountered since the 2016 election.

Make no mistake – the ‘wild west’ internet is about to get steamrolled by ‘progress.’