UK Prime Minister and Conservative party leader Theresa May just fucked up royally. She thought she could capitalize on the wave of nationalism responsible for Brexit – for which the negotiations have been slow going.

In order to expedite the process, May thought she was super cool in April by announcing a “shock” election for today. Her expectation was that MOAR conservatives would snatch up seats in Parliament.

Exit polls are showing May’s plan has backfired. Not only is it looking like the conservative party has lost 17 seats, Theresa May is at risk of losing her position as Prime Minister. It’s now looking like the election may result in a “Hung Parliament,” which means – more or less, nothing’s getting done in Parliament for a loooong time. Bad day at Red Rock for Brexit fans.

To that end, Nigel Farage – Brexit’s death defying bad boy just said Brexit is at risk, and that the UK faces a second referendum if Jeremy Corbyn pulls off an unlikely election victory.

In reaction to the exit polls, the British pound is getting tentacle raped (full Eichenwald). 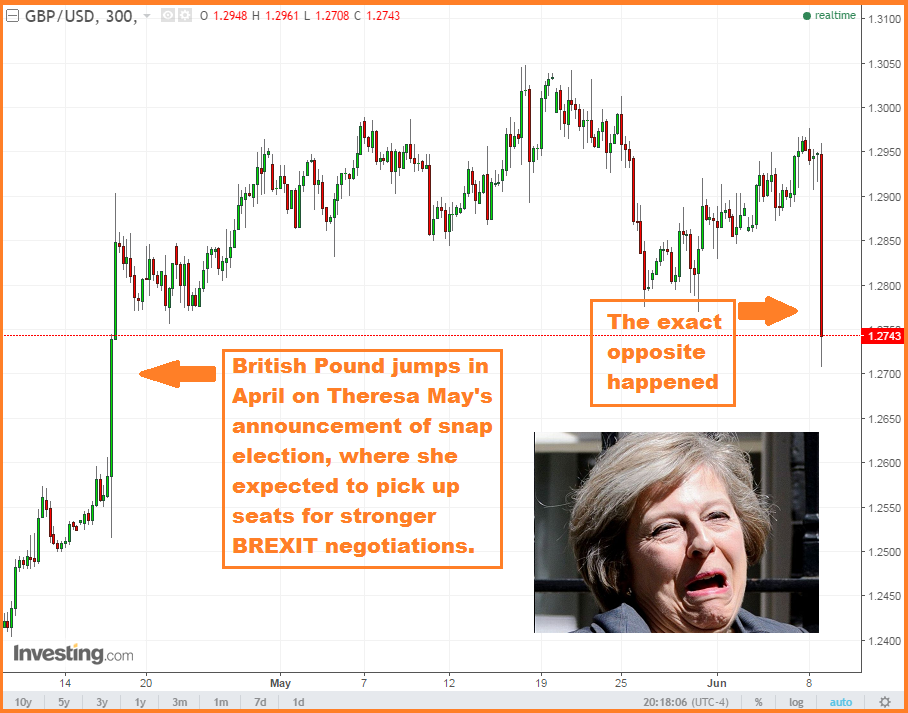 If correct, pollsters say biggest ever surge in polls during a #GeneralElection campaign by Corbyn's Labour – popular policies & leadership.

There may be an even BIGGER upset is in the cards…

Oh my. The official UK #GeneralElection exit poll has now been released by the BBC, and it's a stunning, unexpected landslide. pic.twitter.com/9RYwX496vQ