Deutsche Bank – which announced they would need to raise 8 billion Euros in March, was hit with a $41 million fine on Tuesday for failing to employ adequate anti-money-laundering oversight.

Deutsche Bank’s insufficient monitoring involved billions of dollars in “potentially suspicious transactions” that were processed between 2011 and 2015, the Fed said. The transactions involved affiliates in Europe that failed to provide “accurate and complete information,” the regulator said. –Bloomberg

The $41 million penalty follows a $630 million judgment in January for their involvement in a $10 billion Russian money-laundering scheme involving the bank’s Moscow, New York, and London branches.

It gets better… The $670 million in aforementioned money laundering fines pales in comparison to the $7.2 billion the German bank agreed to pay in January for misleading investors on residential mortgage-backed-securities leading up to the credit crisis.

“This resolution holds Deutsche Bank accountable for its illegal conduct and irresponsible lending practices, which caused serious and lasting damage to investors and the American public,” Attorney General Loretta Lynch said in a release.

This doesn’t sound good at all

Deutsche Bank’s March announcement of an 8 billion euro special rights offering was previously declared a ‘last resort’ by CEO John Cryan, and brings the overall money raised over the last few years to over 30 billion Euros. Germany’s largest bank also abandoned plans to spin off their Postbank retail bank subsidiary, and they are re-integrating their market trading operations with corporate / investment banking. That’s not the behavior of a healthy bank.

As ZeroHedge pondered in February – is it time to panic about Deutsche Bank? 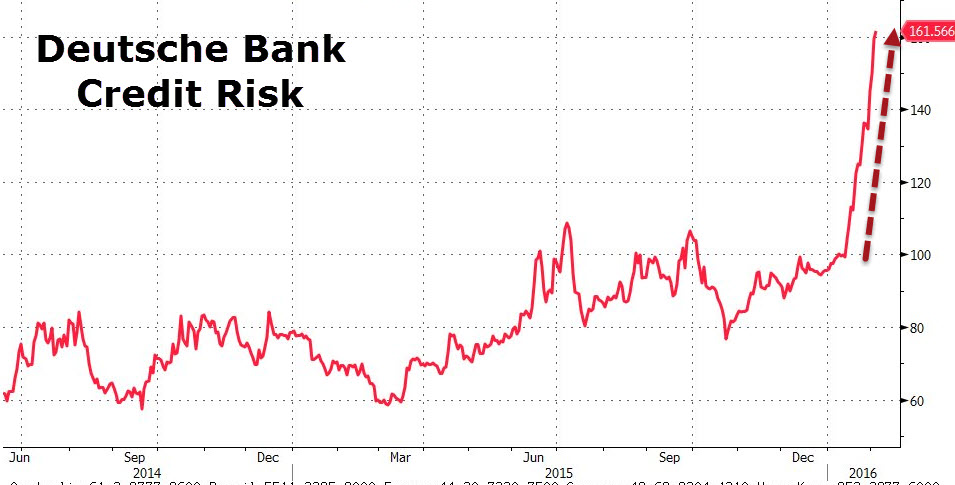 If you enjoy the content at iBankCoin, please follow us on Twitter
2017-05-30
zeropointnow
Share
Previous El Salvador Freaks Out As Trump Deports Hundreds Of MS-13 Gang Members
Next John Sununu Savages CNN’s Alisyn Camerota Over Coverage Of Trump-Russia Investigation