The fallout from the failed #FyreFestival has been nothing short of spectacular. To recap; Ja Rule and some millennial promoter cobbled together an ill fated two weekend festival in the Bahamas. They advertised it using CGI or drawings with what it was supposed to look like, and charged $4K – $12K per person to attend. Then Ja and Millennial guy completely fumbled the ball – leaving thousands of trust-fund babies to play Hunger Games: Ja Rule edition. 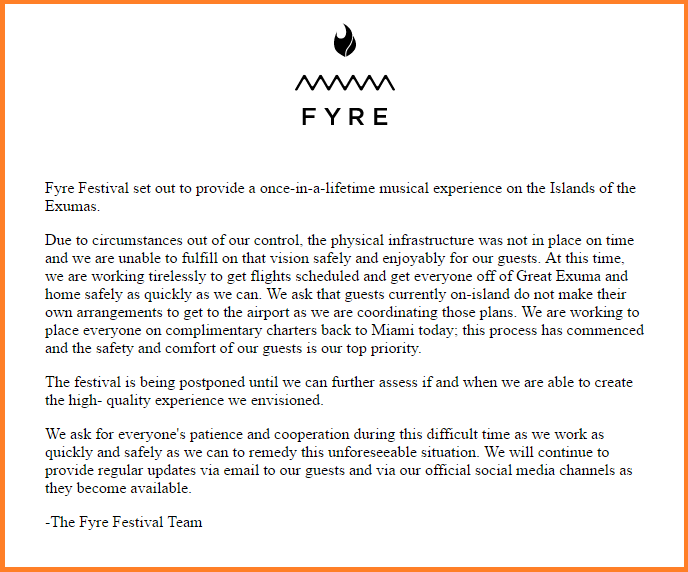 @Ruleyork .@Ruleyork OMG. This is the only way I'm apologizing from this moment on: pic.twitter.com/zxlwBc1ITF

The other guy apologized and looks forward to the next iteration of the concert:

McFarland said that the island “didn’t have a really great infrastructure — there wasn’t a great way to get guests in here — we were a little bit ambitious.”

“There wasn’t water or sewage,” he continued. “It was almost like we tried building a city out of nothing and it took almost all of our personal resources to make this happen, and everything we had, to make this festival go on. We thought we were ready and built two different festival sites.”

On the morning of the festival, McFarland said a “bad storm came in and took down half of our tents and busted water pipes,” while guests began to arrive. That was when he said the organizers realized, “Wow, we can’t do this.”

“We were on a rush job to fix everything and guests were arriving and that caused check-in to be delayed,” he added. “We were overwhelmed and just didn’t have the foresight to solve all these problems.”

McFarland is hopeful that a Fyre Festival in 2018 will come to fruition, saying that make-up dates in May 2018 will be “free for everybody who signed up for this festival.”

An insider has spilled the beans on why this whole thing was doomed from the start:

On Wednesday, Ja Rule arrived for a “site visit.” I don’t know if he actually visited the “site” but he did spend a lot of time on a yacht, according to his Instagram. Meanwhile the event planners were holed up indoors putting together a game plan and a budget. With so little having been prepared ahead of time, the official verdict was that it would take $50 million to pull off. Planners also warned that it would be not be up to the standard they had advertised. The best idea, they said, would be to roll everyone’s tickets over to 2018 and start planning for the next year immediately. They had a meeting with the Fyre execs to deliver the news. A guy from the marketing team said, “Let’s just do it and be legends, man.” -NYmag

Raise your hand if you've had *that* marketing guy in your office. #fyrefestival https://t.co/1YyQG5nc4I pic.twitter.com/8WftnYwIY7

The Bahamas is doing damage control

And reactions around the web have been nothing short of hilarious:

Where should they hold the next #FyreFestival?

Lord of the Flies…

A $5 sandwich vs a 12k sandwich #fyrefestival pic.twitter.com/O8MiJ6E4at

I was never a Ja Rule fan until he trapped a bunch of rich kids on a island while we all laugh, Kudos @Ruleyork @fyrefestival #fyrefestival

How it probably went down. #fyrefestival pic.twitter.com/DLkLNAghoH

Me: I try to be a compassionate person ☺️✌??
Me reading about #fyrefestival: pic.twitter.com/Sz8bmZjpKc

I'm hurting for those who attended #fyrefestival Going to greet them at the airport with my music pic.twitter.com/bUpxk9kyw0

Now that we’ve all had a nice laugh – let’s hope all those rich kids get home safely. Be on the lookout for overwrought cringeworthy stories from “Fyre Island Refugees” who just went through the height of human suffering…