Get ready for the future organic humans – Elon Musk is about to take transhumanism to a whole, nuva, level. 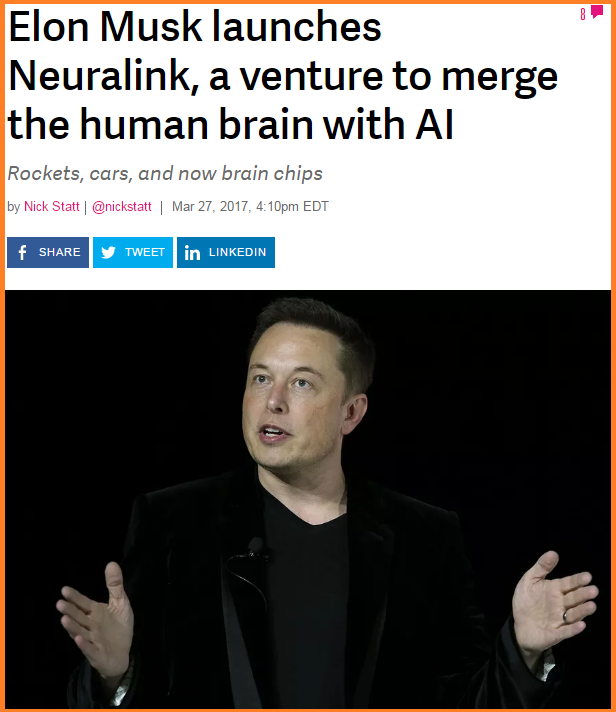 What’s Neuralink and do we still get to have sex in the future?

SpaceX and Tesla CEO Elon Musk is backing a brain-computer interface venture called Neuralink, according to The Wall Street Journal. The company, which is still in the earliest stages of existence and has no public presence whatsoever, is centered on creating devices that can be implanted in the human brain, with the eventual purpose of helping human beings merge with software and keep pace with advancements in artificial intelligence. These enhancements could improve memory or allow for more direct interfacing with computing devices. –The Verge

It’s pretty obvious what’s going on… Musk knows that the Earth is doomed – not from global warming, but because the sun’s output is decreasing and we’re going to enter into another ice age. Expect 7 Billion humans to try and cram together around the Equator, competing for increasingly limited resources – leading to civil war, death, and a huge setback in technological progress as humanity struggles to simply survive. We gotta get the fuck out of dodge.

So – Musk is taking us to Mars. He’s already mentioned nuking the atmosphere to unlock the Martian polar ice, which means all that’s left is to pool all of Earth’s resources and execute on his well thought out plans before it’s too late. Not so fast! Our feeble human bodies which are designed to live on earth, not Mars… In addition to massive cancer caused by unshielded exposure to solar wind – which the earth’s unique magnetosphere protects us from, human bodies will shrivel up in the low-gravity Martian environment, which is just 38% of earth’s.

So clearly we need radiation resistant cyborg bodies controlled by our organic brains for now, and eventually Musk will figure out how to create a positronic brain into which we will eventually upload our consciousness and live extremely long lives. Fully functional, hopefully. We gon’ be robots n shit. Plus, as Musk says, we’re going to need to be able to compete with AI – which will be able to think orders of magnitude faster than our clunky biological grey matter.

Also, consider this… If the human race becomes robotic – brains and all, we could conceivably build spaceships that would allow us to travel through vast distances of space over long periods of time. All we’d have to do is power down our brains, stow our robot bodies, then head towards the nearest habitable planet for a few hundred years at a fraction of the speed of light to see what’s there. If we find another utopian Earth-like planet, maybe we can genetically engineer biological bodies again to repopulate humanity the good ol’ fashioned way.

Then again, maybe Musk is just trying to test the limits of the simulation…

Elon Musk discusses the future of humanity, space travel, and living in a simulation… https://t.co/EHUQsOkBzP pic.twitter.com/ApN7CfLZTL