Deutsche Bank ($DB) CEO John Cryan just can’t catch a break. After navigating the beleaguered bank through a $7.2 Billion toxic US mortgage settlement last December – contributing to a net loss of $2.1 Billion in Q4’16, and a $10 Billion Russian money-laundering settlement in January – it appeared that the bank’s troubles were behind them. Shares rallied back fiercely after hitting their lowest price in over 20 years last September over fears that the German government wouldn’t provide a bailout – should one be required, though it looks like the party may be over.

In a letter to employees, Cryan said everything’s under control (the plane is only missing a wing and a few engine bits):

We expect proceeds of around 8 billion euros from this. According to the future capital rules this would enable us to reach a core capital ratio of approximately 14 percent and remove a major source of uncertainty. That should make us significantly more attractive for our clients. -Source

Deutsche is also walking back 2015 plans to spin off it’s Postbank subsidiary of retail banks – instead merging it with DB’s main private and commercial banking business, and they are re-integrating their market trading operations with corporate / investment banking.

Perhaps it’s best to raise money now while they still can – considering Marine Le Pen is currently leading the polls in the upcoming French election. If she wins, Frexit will happen – which means the European Central Bank safety net (which France and Germany primarily fund) will likely disintegrate, and EU member nations may be forced to revert to their pre-Euro currencies (notwithstanding desperate measures, such as a two-Euro system). Picture an old timey black and white movie where an obviously miniaturized set train derails. Perhaps this will be the price of returning to borders, language, and culture – as we all work through the new normal. 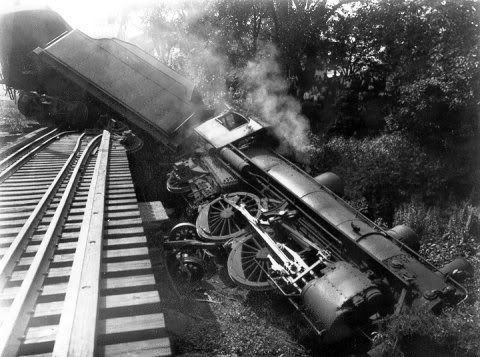 The Deutsche Bank announcement comes on the heels of Italy passing legislation in December to enable a nearly 9 Billion Euro state bailout of their largest bank – Monte dei Paschi, as opposed to reliance on the ECB.

Nothing to see here… just European banks trying to un-fuck themselves before they’re out of options.

If you enjoy the content at iBankCoin, please follow us on Twitter
2017-03-06
zeropointnow
Share
Previous Based Stick Man AKA “Alt-Knight” Arrested – Sits In Exile While Antifa Scum Return To Mom’s Basement
Next Mark Levin To CNN Mega-Choad Brian Stelter: You Are Thoroughly Dishonest