PewDiePie is a Swedish web-comedian and performance artist – with over 53 Million subscribers who know he isn’t a racist. He’s got the largest online audience in history, comprised mostly of post-millennial “Generation Z” youth, and his also-popular girlfriend Marzia has 7 million subscribers – making them internet’s unofficial first couple. PewDiePie has made tens of millions of dollars from his channel, yet he’s remained humble and real throughout his ascent to internet greatness. The problem? He came out as a Trump supporter during the election, and the MSM has been gunning for him ever since.

I’m sure you’re aware of what happened over the last week; PewDiePie, whose real name is Felix Kjellberg, made a few anti-Semitic jokes and immediately had his ass handed to him by Disney and Google after the soon to be failing Wall St. Journal made a national issue out of the 27 year old’s antics. The WSJ also cobbled together a hit-piece video accompanying their report, which spliced together out of context footage of PewDiePie doing Nazi stuff. It’s been dismantled.

Kids love the guy. They know PewDiePie. So the fact that corporate media thought they could simply gang up and wave a magic wand branding Kjellberg a Nazi was ham-handed and presumptuous. As if WSJ, Disney, Google, Salon, Slate, and the rest of the queued up MSM hit-squad could convince kids and their parents that a guy who’s been speaking directly to them, unfiltered and genuine – is Hitler reincarnate.

In the world of influence, PewDiePie has a lot of power. He’s also woke – meaning, he doesn’t buy the SJW / bleeding-heart narratives which have driven much of America’s easily triggered youth to retarded hysterics. PewDiePie is quite frankly un-poisoning the minds of hyper-sensitive kids raised on kneejerk identity politics;  the untriggering of America if you will. PewDiePie was a threat to the MSM.

Why the selective outrage WSJ?

The response to the MSM throwing PewDiePie under the bus has been glorious:

First: PewDiePie has issued a response (see here), which – in mere hours, has 99.9% thumbs up with over 800,000 users voting as of this writing – far exceeding it’s view count. Clearly people don’t even need to watch it to know he’s not an anti-Semite. 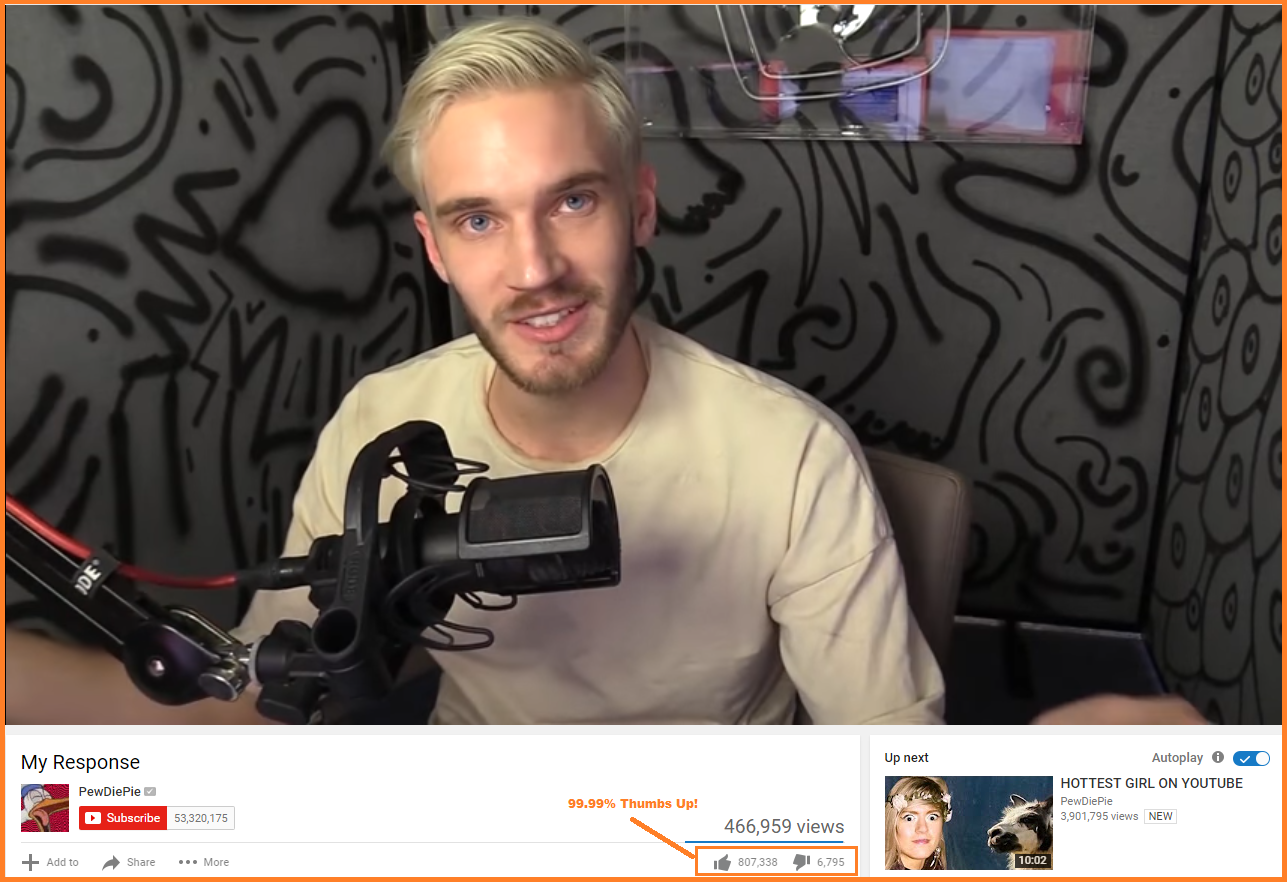 Next: Reddit’s largest anti-Trump forum /r/news, is on PewDiePie’s side. This is huge divide-dealing, generation-redpilling stuff. Click here and just scroll down to see what this exceedingly liberal audience has to say about it, then go back to /r/the_donald where free speech is still relatively safe.

And the rest of the internet is on fire in response to the WSJ/Disney/Google’s shit:

So @Disney fired PewDiePie, but still employs Sarah Silverman, Must the the SJW in them @Sargon_of_Akkad @PrisonPlanet @MarkDice pic.twitter.com/sXeTaEPfoS

Someone started a Change.org petition to reinstate his show.

PewDiePie got red pilled many months ago & the mainstream entertainment industry is now canning him. https://t.co/Igxlr5I53k

Good job Disney / WSJ / Google – you played yourselves by pouring lighter fluid on a raging fire of truth.