FAKE NEWSFLOW: Are The NY Times, Guardian, And WaPo Buying Clicks? China Jumps From Trickle To Half Of All Traffic In Two Months

Last week the Failing New York Times published an article crediting Donald Trump and the controversial election for “more subscribers in three months than all of 2015,” claiming the addition of 276,000 new “digital-only” customers. The beleaguered publication owned by Mexican Billionaire Carlos Slim is doing so well in fact that they are vacating 8 floors of their New York headquarters to generate “significant rental revenue,” as well as pushing lame Twitter ads offering 40% off subscriptions which state things like “Truth. It’s vital to democracy” and “The best independent journalism.”

While subscriber count may have allegedly increased, website traffic really didn’t start picking up until the first week in December. The Washington Post and The Guardian (UK) saw similar traffic trends around the same time, in stark contrast to most of their peers. A quick before-and-after illustrates the dramatic pickup in visitors:

Rankings at the beginning of December, 2016:

Traffic begins to pick up significantly around the middle of December for all three. Here’s a look at the overall picture compared to various other news outlets:

That’s odd. Now let’s take a look at each outlet’s traffic by country for the NYT, which shows significant increases in visitors from China, jumping from 5.1% to 49.2% of all site traffic in two months: 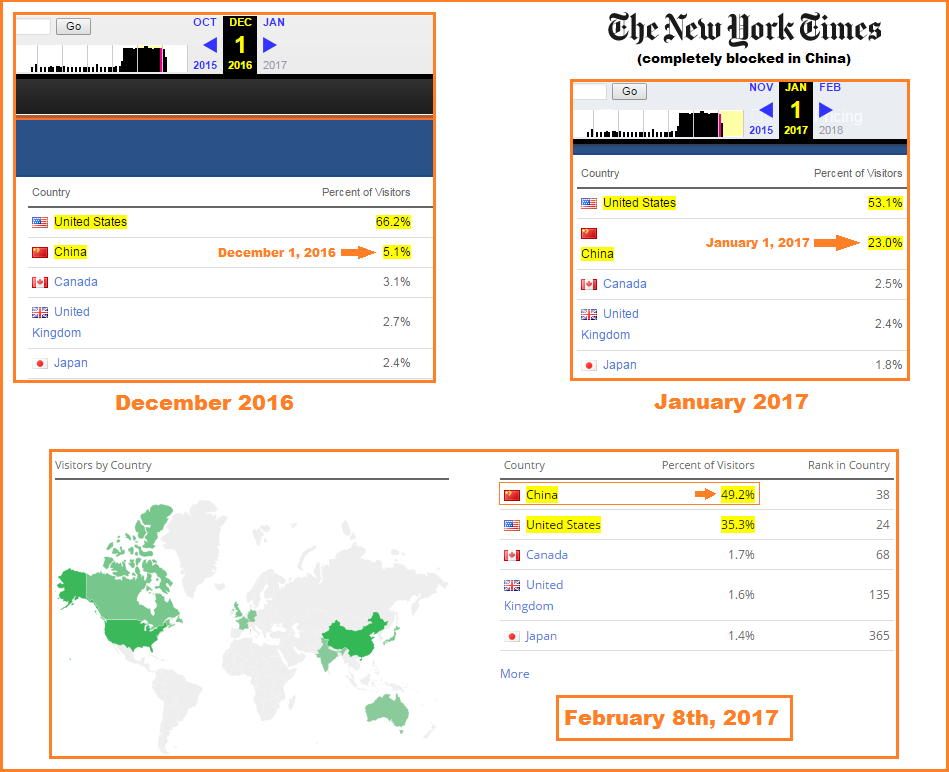 What’s most interesting is that The NY Times has been completely blocked in China since 2012, and just last month Apple was ordered to pull two NYT apps from the App store despite users being unable to view content since the original 2012 ban. Per the NY Times:

“When the Chinese government began blocking the Times websites in 2012, it also prevented users with Times apps from downloading new content.“

People seeking to bypass internet filters have traditionally used VPN’s (Virtual Private Networks) which tunnel through China’s highly restrictive firewall, however China has been cracking down on VPN use for several years.

Now let’s take a look at the Washington Post and The Guardian, which are not blocked in China – jumping from virtually no traffic to 58.9% and 57% of site-wide visitors respectively. 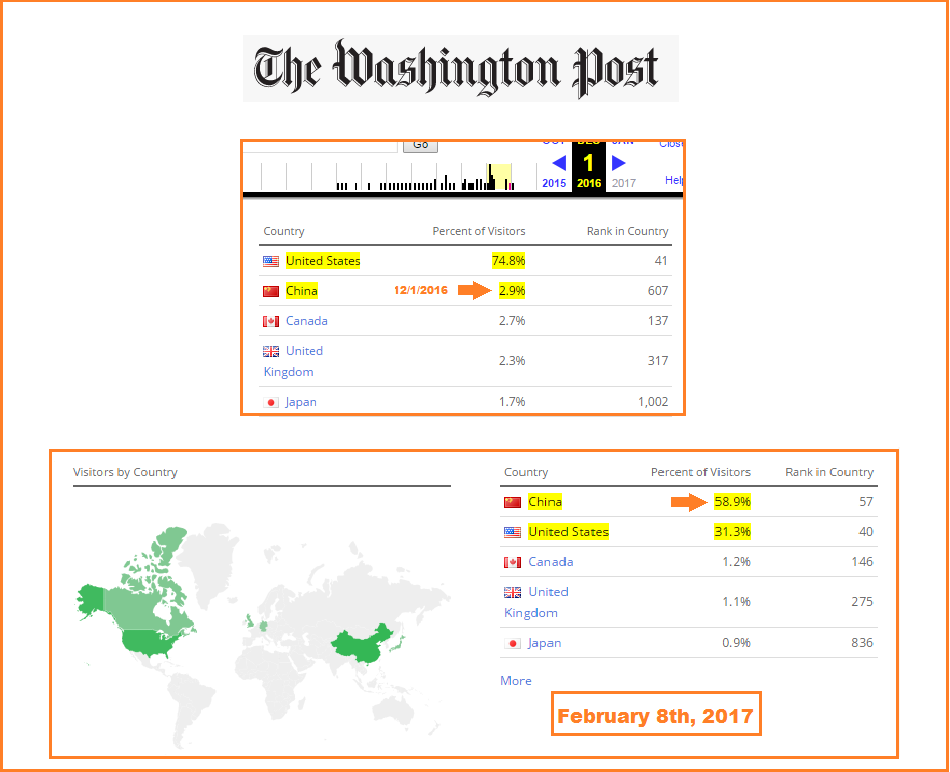 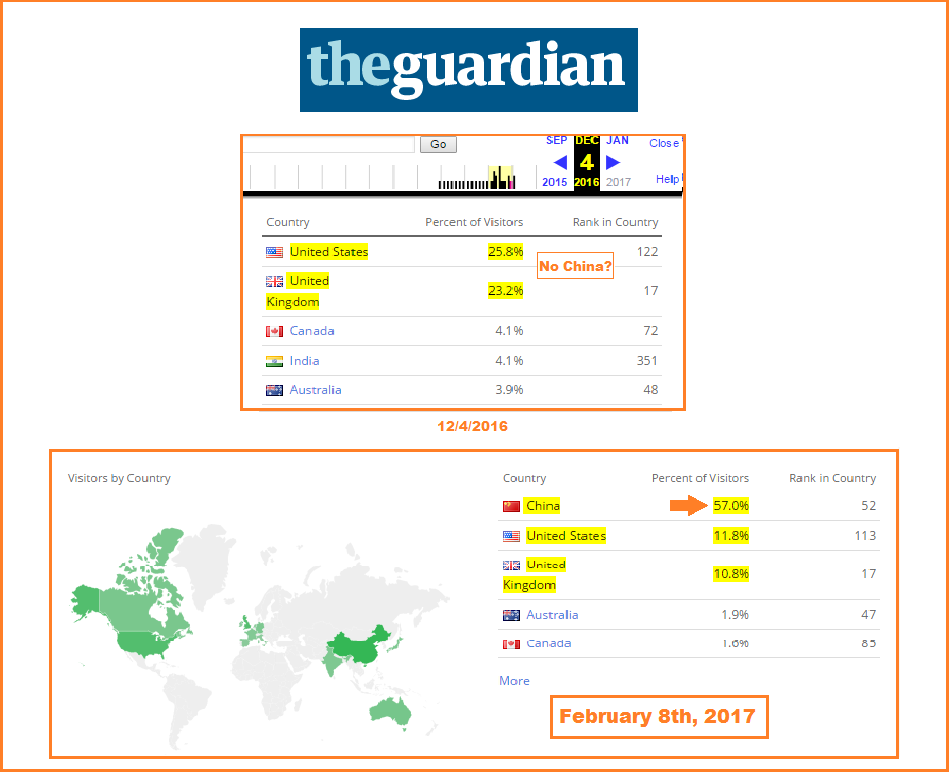 These dramatic increases in traffic have significantly bumped each site’s Alexa ranking by as much as 38%, a key metric used in website valuation. Of note, BBC.com experienced a similar boost, and others may have as well.

Not to overstate the obvious, but considering the URL ban on the New York Times, one might conclude that this massive increase which now accounts for nearly half of all website traffic is some type of high volume traffic generating bot server unimpeded by China’s restrictive firewall, synthetically inflating visitor counts for affected sites.

All three news outlets spent much of 2016 trying to influence the election in favor of Hillary Clinton with biased coverage and regular hit pieces against Donald Trump. Since winning the election, President Trump has declared war on much of the mainstream media – branding it the “opposition party,” while remaining under heavily biased attack. China is no fan of the US President either; between the threat of tariffs and Trump’s disregard for the long held “One China” policy over Taiwanese recognition, China has both economic and political reasons to try and mitigate the US President’s tough talk.

In fact, Chinese state-owned JAC Motor and Mexican auto manufacturer Giant Motors, co-owned by NYT owner Carlos Slim, are jointly investing over $200 Million dollars to build SUV’s in Hidalgo, Mexico after President Trump’s continued spats with Mexico over the proposed border wall, as well as the demand-killing tariffs he claims will pay for it. Amazon, which shares an owner with the Washington Post, was recently granted permission by China to begin forwarding freight from Chinese merchants selling on its site, and they have also been allowed to operate Amazon Web Services (AWS) in the highly restrictive country.

While not much else is known at this point, the list of entities with the capability of pushing half the traffic to several major websites from Chinese domains seems rather short.

UPDATE: A user on 8chan found this: http://adage.com/article/media/washington-post-continues-debut-ad-produc…

Update II 02/17/2017: Looks like Alexa removed the country-specific data for the affected sites: 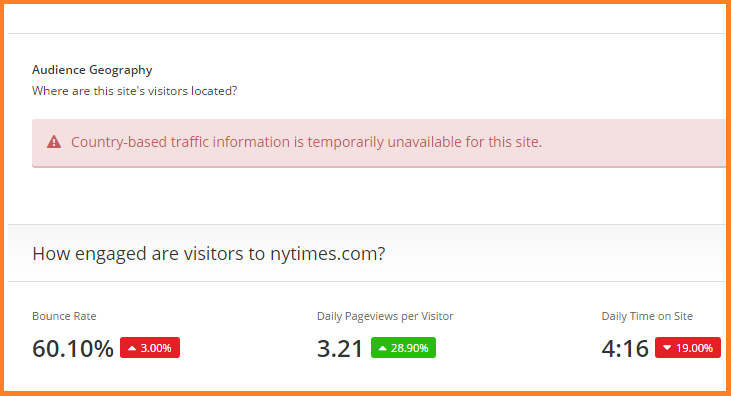 If you enjoy the content at iBankCoin, please follow us on Twitter
2017-02-09
zeropointnow
Share
Previous Rand Paul To Tucker Carlson: Let’s Audit The Fed – Oh, And WTF Is Up With The Neocon Iraq War Architect Trump’s About To Appoint?
Next Dramatic Expedia CEO Dara Khosrowshahi Ends Earnings Call With Apocalyptic Flair