A day of protests across the University of Washington campus turned violent Friday evening after a 32 year old man was shot in the abdomen outside of a Milo Yiannopoulos event. The victim, currently in surgery, was rushed to the hospital in critical condition, and the suspect turned himself in, telling police he fired in self-defense. This comes on the heels of a progressively violent day on campus as Anti-Trump Protesters clashed with police and Trump supporters; throwing rocks, bricks, firecrackers, and paint. Police helicopters and the FBI bomb squad had been deployed earlier in the evening, and pepper spray was used to control the crowd. 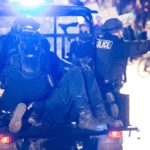 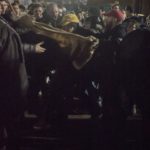 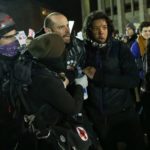 Update 3: Account of the shooting from a 4chan user who was 8 feet away 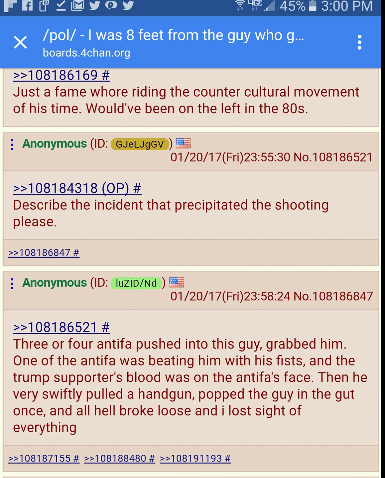 In a Periscope stream recorded minutes before the incident, the shooter can be heard saying:

“I don’t give a fuck man, I’m just here by myself. I’m not with anybody. I am speaking my mind, alright?”

Minutes later, a single shot rings out, which the shooter claims was in self-defense:

Earlier in the evening, a high school student on the UW campus was beaten up and had paint thrown on him:

And a protester became aggressive with a man filming their group:

Weapons have been confiscated:

According to reports from Seattle PD, anarchist protesters outside MILO’s event at Washington University tonight had baseball bats and sharpened signposts confiscated by law enforcement. Police in riot gear have formed a human wall between event attendees and protesters. –Breitbart

The Seattle cell of the “Anti Fascist” group showed up in full force waving the same flag that can be seen in Thursday night’s beating outside of the “Deploraball in Washington, DC.” This has moved beyond protesting, evolving into riots and domestic terrorism.

Here is a video recap of the incident from Seattle’s KIRO 7:

The shooting comes a week after threatening flyers 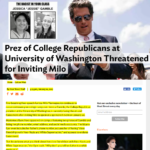 appeared around campus in advance of the MILO event, which listed the a photo and contact info of College Republican group president Jessica Gamble, encouraging people to harass Gamble and her father.

This is some serious shit…

If you enjoy the content at iBankCoin, please follow us on Twitter
2017-01-21
zeropointnow
Share
Previous CNN Caught Lying Twice In One Day! Nancy Sinatra and Reddit Put The Brakes On #FakeNews [updated]
Next Watch: Bigoted Turtleneck-Wearing Liberal Gets Tossed Off Alaska Airlines Flight For Harassing Trump Supporter! [Updated]